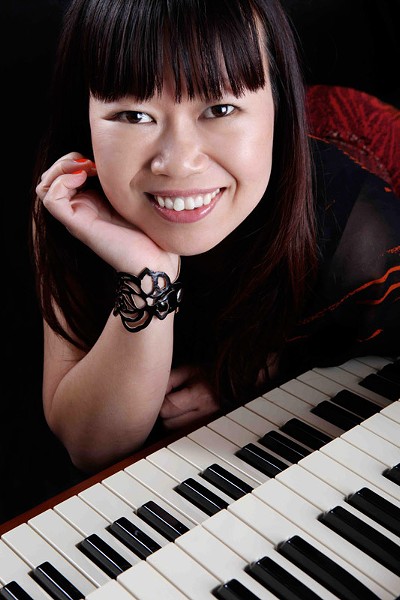 Once in a while, Akiko Tsuruga has to pinch herself and ask, "How did I get here?"

She had a steady gig playing the organ in her hometown of Osaka, Japan, when she took a vacation in New York City. While there, she heard her hero, Hammond B3 organ icon Dr. Lonnie Smith, playing in saxophonist Lou Donaldson's quartet.

"When I saw the Lou Donaldson Quartet at the Village Vanguard, I thought, 'Wow!,'" says Tsuruga. "A couple of years later I joined his band. I never thought I could move to New York and make a living playing music. My life is my dream life."

Growing up in Osaka, Tsuruga started to play the organ at the age of 3, and played at the family's church. But her grandmother was a jazz fan and she shared her enthusiasm with Tsuruga.

She was 16 when her teacher at the Yamaha Music School introduced her to another kind of organ music, the B3, and one of its greatest players, Jimmy Smith.

"I thought Jimmy was great, but I couldn't understand what he was doing in terms of technique, and I had never heard that kind of rhythm," Tsuruga says. "After that I decided to learn piano because no one played organ like Jimmy Smith in Osaka. So I decided to study classical music in college."

Ten years later, on that visit to New York, she saw Dr. Lonnie Smith, but she was still puzzled.

"I didn't know how he played what he played," Tsuruga says. "I didn't think I could play organ like that."

Tsuruga returned to Japan and resumed her Osaka gig.

"I had learned the basic things," she says. "I realized people liked my organ playing more than my piano playing. Also the feel of the keyboard — organ is much easier to play than piano. I felt that I could show my emotion more on the organ. I want to play like a big band by myself."

Touring American bands came through the club, and one night she met drummer and singer Grady Tate. He was so impressed with her B3 sound, he asked her to move to New York.

"My mom came to the Blue Note when I played with Grady Tate," Tsuruga says. "She said to me, 'This is your life.' And Grady was taking care of me, and in America, I had people around me who were so nice to me."

"Dr. Lonnie Smith had an apartment in New York and I was chasing him," Tsuruga adds. "Every time he was in town, I went to his place and watched how he played the organ. When I went to his gigs, I sat in front of the organ and I was watching his coordination.

"He introduced me as a student, and he was a great teacher. Sometimes we played together. I realized there was a difference and I asked him why was he different? He said it was rhythm, and he said, 'Don't just play, put your emotions into every note.' I learned how to make it dynamic from Dr. Lonnie Smith, and I never paid a fee to him."

Tsuruga first played at the XRIJF with Donaldson's band a few years ago. She just about stole the show and was invited back with her own group. This will be her third visit to the festival.

When she's the leader, selections range from jazz standards to more contemporary music, like "Where Is The Love" and "How Deep Is Your Love." And when she's deep into a solo, she shows plenty of emotion.

"I just follow my heart. I never think I should play that chord or that voicing or that sound. I just listen to other people — the drummer, the guitar player — and they inspire me. I just try to play dynamics."