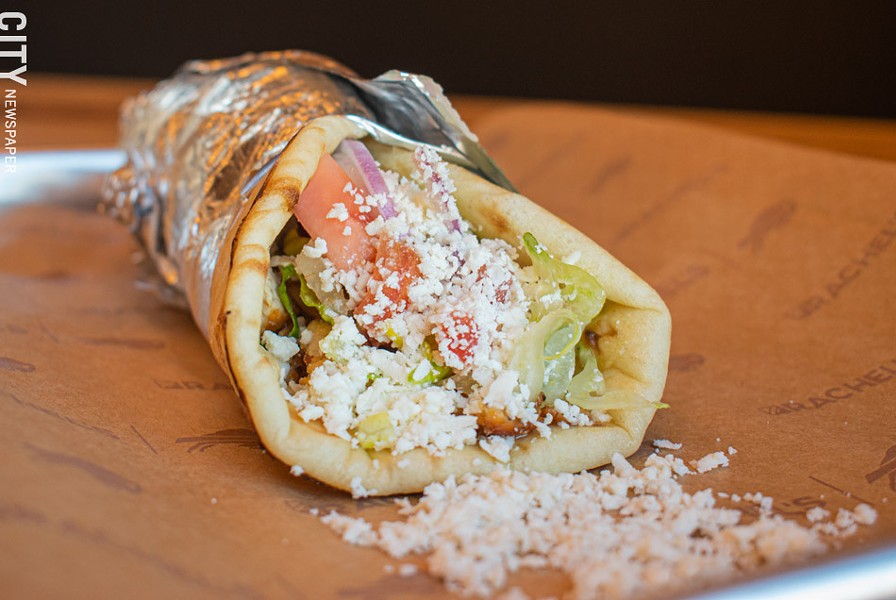 I love a fast-casual restaurant. As someone with a penchant for deviating from menu choices, they're a perfect fit for me -- I sometimes feel guilty asking for a custom order at a place that has established prepared items. These days, throughout this city I can get everything from burritos to pizzas, Indian food, and ice cream made-to-order in front of my eyes. But one thing I've longed for is a fast-casual Mediterranean spot. I love going to restaurants that represent different Mediterranean regions, but I can't get in and out of one quickly when I'm on the go. Whether it's Greek, Turkish, or Levantine, something about Mediterranean fare puts me in a relaxed mood, and I wind up spending more time than I anticipated enjoying my food. Fortunately, my wish had been granted: Rachel's Mediterranean Grill, a Lebanese staple from Buffalo, has expanded to Rochester, with locations in Henrietta and in Pittsford.

Rachel's is owned by the Khoury family and named for the family's youngest daughter. Son and manager Steven Khoury gave me a brief history of the restaurant: Rachel's started in Buffalo as a little mom-and-pop cafe in 2006. Having success, the Khourys decided to expand, and with that expansion, they changed their business model from café-style to their current fast-casual model. Rachel's grew to seven locations in the Buffalo area, eventually adding a location in Henrietta on Hylan Drive, across from the Marketplace Mall. The Pittsford location opened in early March State Street, a stone's throw from the Erie Canal. That makes two local spots to get regionally-sourced Lebanese-style cuisine, adjusted to your specific tastes.

Rachel's also happens to be the official Mediterranean restaurant of the Buffalo Bills and Buffalo Sabres. Former Bills center Eric Wood frequented Rachel's original location, and he would bring food back to his teammates. Eventually, they were ordering Rachel's for catered events, which created a bond with the team and its affiliates. Recently, the Khourys had talks with Bills owners Terry and Kim Pegula, and an official partnership was formed. Any food fit for the Bills Mafia is good enough for me.

Rachel's set up is familiar to anyone who has had to grab a quick bite on their lunch break: choose a bowl or a wrap, then pick a base, a protein, toppings, and a sauce. The base could be mixed greens or brown or white rice, or even pita chips. I would suggest Rachel's Rice option, though. It's a traditional Mediterranean rice cooked with long grain white rice and whole wheat noodles.

If you're like me, you can go to Rachel's two days in a row and order two different types of dishes. I went with a falafel bowl on a spring mix base for my first visit, adding all of the grilled and fresh vegetables, with tahini and house-made hot sauce drizzled on the dish. The following day I got the Rachel's Rice with a mix of the chicken souvlaki and shawarma, piled the vegetables on again, and finished with a dill sauce and hot sauce. Both bowls were delicious. The falafel was soft and not too dry, and also satisfying without being overly-filling. But of the two meals, I especially liked the chicken and dill sauce mix. The sudden blast of the hot sauce accentuated the flavor of the chicken, and then the dill somewhat smoothed everything out. Each bite was shocking, followed by a sense of serenity.

The interior of the Henrietta location may have contributed to the serenity I was feeling while eating, to be honest. It's a marked improvement from the building's previous tenant, Qdoba. The former purples and yellows were replaced with grays, whites, and earth tones, yet it somehow looks more vibrant. Ceramic tiled walls are staggered grays of varying shades, and the floor is wood with a shiny, black stone border. The effect is futuristic yet still like a classic, portside cafe. The glass façade let the afternoon sun bathe the dining area in natural light, making the hanging LED lights nearly unnecessary. It was a pleasant reminder that spring is nigh, and I look forward to the inevitable outdoor seating, as Rachel's has a patio nearly the length of the storefront.

Steve Khoury says that the family plans on continuing its expansion in Rochester and into parts of Pennsylvania, and eventually throughout the nation. Despite this, they want to maintain Rachel's hometown feel. They've done a good job thus far, and I have no doubt that as they expand, they'll still feel like our own Upstate take on food from across the world. Also: Go Bills!