The fast-casual food trend in the area is not new. Chiptole and Moe's use the approach with Tex-Mex, which paved the way for Core Life Eatery and Naan-tastic. It's not a surprise that fast casual pizza followed in the trend. And if we are being honest, ALL American pizza is do-it-yourself. We order what we want pizzerias to put on our pizzas all the time. It did not start with the first person to put a pineapple on a pizza and then be subsequently run out of town by a horde of torch-and-pitchfork wielding "pizza traditionalists." So what makes Create A Pizza on Monroe Ave stand out from other pizza joints? Besides being the only fast-casual pizza restaurant within Rochester city limits, Create A Pizza's head chef-general manager Katelyn Dunne created all of the recipes.

Dunne proudly makes every batch of dough, as well as the sauce, appetizers, and desserts the restaurant offers. The non-DIY pizzas on the menu are her own recipes as well. All of the food is brought in fresh daily and prepared in the kitchen. Besides a mixer, no machines touch the dough; it's all hand stretched. The chicken comes fresh, and Dunne seasons and cooks it in-house. The meatballs are prepared and cooked in the oven. With the exception of the gluten-free cauliflower crust, nothing comes into Create A Pizza in a vat or box, and that is only because Chef Dunne has not yet perfected a gluten-free recipe on her own that is to her satisfaction.

Though Mark Teng is the official owner, Chef Dunne has full control of the menu and operations. This is her baby, so her attention to detail comes as no surprise. She has been cooking since she was a child and has accrued years of professional culinary experience, including working at another fast-casual eatery. You can tell how much care she puts into the food and the service by the taste of it.

I ordered two pies when I visited: the gluten-free 10-inch ($11.99) and the personal "slice" ($7.99). The personal is not really a slice, it's the size of a 10-inch pie, but it's stretched and laid out to resemble a giant, face-sized slice that you'd see at any other pizza shop. But the "slices" at Create A Pizza are prepared fresh, not cooked hours prior and languishing in a glass case under a heat lamp. You have a choice of one of seven sauces (plain or hearty tomato, pesto, olive oil and garlic, BBQ, Buffalo, and sweet Buffalo) and seven different cheeses, including a vegan Daiya cheese. After that, there are many standard and non-standard vegetable and meat toppings.

I won't bore you with all of the specific toppings I chose for each pizza. Many people get passionate about what does and does not belong on pizzas, and I don't want to be judged too harshly for all the seasoned zucchini I put on my slice. I will say that both pizzas were delectable. The hearty tomato sauce is thick but not too chunky and has a bold, savory flavor. Some other pizza shops put sugar in their sauce to bring out flavor, but I prefer not to have a candy tomato pie. The cauliflower crust is also quite tasty. It is a thin crust that gets crispy but is still soft on the inside. Still, I look forward to the gluten-free recipe that Chef Dunne will create on her own, because her dough for the general personal slices and 12-inch was mouthwatering. 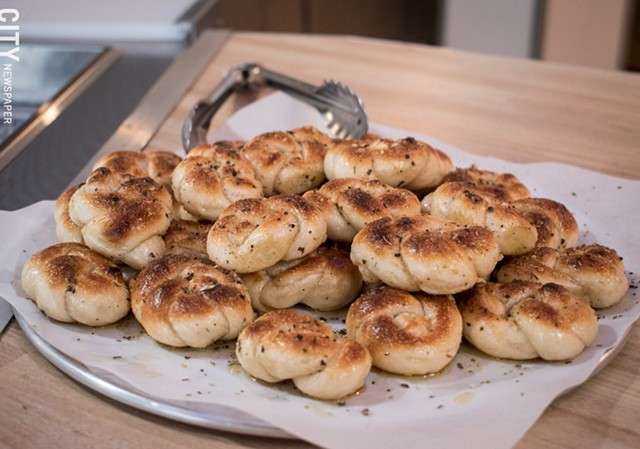 Create A Pizza accommodates for many dietary restrictions as well. There is a separate set of the ingredients designated for gluten-free and vegan customers to avoid cross-contamination. It is also possible to have a completely dairy-free pizza if you like. The shop offers vegan sausage, and even the garlic knots and cinnamon twists are vegan. No one is left out.

The convenience of the location and the freshness of ingredients at Create A Pizza are enough reasons to frequent the restaurant. Besides that, people who love pizza rarely agree on what to put on a pizza, so there is nothing like a personalized pie all to yourself. That way, everyone is satisfied, and there's no need to get out the pitchforks. 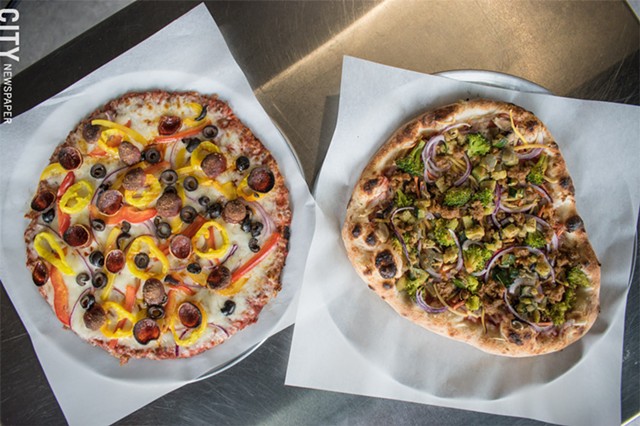