Far out, but up close and personal with pot

April 01, 2021
Many a cannabis consumer has an intimate relationship with his bud. But few have gotten as up close and personal with pot as Ted Kinsman, a scientific photographer at Rochester Institute of Technology who does not indulge in the jolly green grass.

When Kinsman’s otherworldly images of microscopic parts of the cannabis plant started circulating on the internet in 2018, not everyone believed what they were seeing. Some took to Snopes.com to verify that the suspiciously psychedelically-hued images were true representations of pot.

The sleuthing site confirmed that they were genuine images of cannabis, but clarified that Kinsman had digitally colorized them to make parts of the plant pop — specifically the parts that get you high.

Kinsman, a professor in the Photographic Sciences Department at RIT, published his images along with an essay explaining how and why he made them, in a 2018 book titled “Cannabis: Marijuana Under the Microscope.” 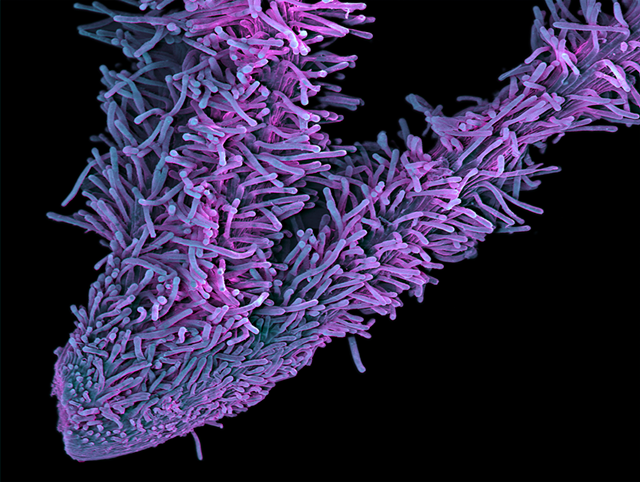 His close-up images of cannabis look like alien landscapes — vibrant forests with Dr. Seuss-like trees enveloped by a pitch-black vacuum.

“I like to think it’s what a person would see if they were just a few microns tall and walking through these forests,” Kinsman told Tech Insider shortly after his book launched. For reference, the average strand of hair is 70 microns wide.

Kinsman digitally colors most of the plant with a vibrant gradient of green, while he uses candy-like pinks, purples, and blues to highlight the glandular trichomes — bubble-like sacs filled with a concentration of the chemical tetrahydrocannabinol, better known as THC.

More than just a series of engaging pictures that might charm any abstract art-loving collector, Kinsman’s book dives deep into the minutiae of the plant, exploring cell biology and the structures and functions of its parts in an easily understandable manner. He cast his approach as “plant biology lite” in a conversion with CITY.

“My goal is to inspire respect for cannabis, as well as the beauty of all plants in the natural world,” Kinsman wrote in the introduction to his book.

Talking with Kinsman, it’s obvious that he’s enthusiastic about natural phenomena and artful engineering, but also that he has a lot of fun with his explorations. His fascination is infectious when he discusses the structures of snowflakes, engineering a machine that prints dot matrix portraits out of coffee drips, or instructions on building a cocktail drinkbot.

Kinsman says his goal is to make science as visually appealing as possible to everyday people. He’s done it. Although his images won’t be found in an art gallery, they have found their way into pop culture.

His cannabis imagery and other work have been featured in science magazines, TV shows, and commercials. Time-lapse imagery he made of a rose blooming accompanies the opening credits of “The Bachelor.” Other images of his have been seen in episodes of “CSI: Crime Scene Investigation,” “Grey’s Anatomy,” “American Idol,” and “The X-Files.”

In 2019, the BioCommunications Association honored Kinsman with its most prestigious commendation, the Louis Schmidt Award, which recognizes outstanding contributions to the progress of biocommunications.

While the wildest-looking of Kinsman’s cannabis images are scientifically accurate, they aren’t photographs. There is no camera involved. They’re images made with a Scanning Electron Microscope (SEM), which bombards carefully selected and arranged freeze-dried plant samples with electrons. The microscope scans the surface topography of the sample, and creates a high-resolution image using that data. That takes about four minutes. Kinsman then painstakingly colorizes the image in Photoshop. That part takes hours upon hours.


For 10 years, Kinsman had his own SEM in his living room, until it broke down about two years ago and he scrapped it. His wife was happy to get the space back, he said.

“What most people don't realize is a scanning electron microscope is about the size of the VW Bug,” he said. “And it weighs around 2,000 pounds.”

Kinsman said he likes to focus on making images of things that others haven’t done before, or haven’t done well.

Recently, he designed a bicycle with a giant Spirograph-like apparatus affixed to it that enables the rider to create Spirograph-like drawings by pedaling. Kinsman presents his engineered art-meets-science creations at makers’ fairs.

“I'm not really an artist,” Kinsman said. “I just try to sell science the best I can.”