Fairport’s planned sale of the Potter House falls through A housing developer who was set to buy the historic Potter House from the village of Fairport has canceled the deal.

But Mayor Julie Domaratz said Thursday that the village is still looking to sell the 4,600-square foot Italianate mansion that fronts West Church Street and is a fixture of Potter Park and village life.

For decades, the house was used as a public gathering space, hosting Boy Scout meetings, dances, wedding receptions, and other events, before becoming an apartment house in recent years.

But village officials stopped renting the apartments a few years ago, citing deteriorating conditions and a desire to get out of the landlord game . The house, which was built in 1858, needs extensive and expensive repairs.

“We don’t have the ability, nor would I ask village taxpayers to foot the bill for...at this point it’s probably $1 million worth of work,” Domaratz said. 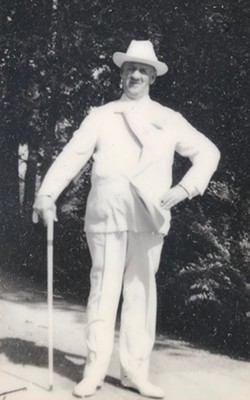 Fairport officials, Republicans and Democrats, have struggled over what to do with the Potter House, which has been in the village’s possession since 1943, when Frederick Potter, a member of one of Fairport’s wealthiest families, left the house and its estate to the village upon his death. In his will, he specified that the village was to use it for a playground, park, or other public purpose, but also gave the village permission to sell the house. Potter Park comprises the rest of the estate.

The village in May 2021 agreed to sell the Potter House to Aristo Properties, a Perinton-based homebuilder and housing developer. Aristo offered the village the house’s $400,000 appraised value and the two parties signed a sale contract.

But Aristo moved to cancel the contract in September, claiming that officials had failed to rezone the property, which the company intended to convert into apartments. The village agreed to the cancellation, which was announced Wednesday by the attorney representing residents who sued the village over the sale.

State Supreme Court Justice Gail Donofrio dismissed the lawsuit on Oct. 12, after both sides conceded the issues it addressed were made moot when the Potter House sale fell through. The lawsuit, which listed 19 Fairport residents as plaintiffs, asked a court to void the village board’s resolution authorizing the sale of the property.

“The residents would like the property restored as part of the park and put to public use,” said Alan Knauf, the residents’ attorney. “The village hasn’t maintained it or anything.”

Liz Barnum, who lives next to the Potter House, said residents worried that Aristo’s plan to convert the mansion into apartments, and a now-abandoned village effort to rezone roughly a dozen properties on West Church Street to allow multi-family housing, could have changed the village’s character.

“I think the biggest thing we were trying to focus on is preserving the property because we just, we did not want to make Fairport become such a large, highly dense population,” Barnum said. “That was kind of the first example of how they were starting to make some changes around the village of Fairport.”

Domaratz said the area is currently zoned for single-family housing but that there are a few properties that don’t fit the classification. A consultant hired by the village to aid in the development of its comprehensive plan recommended rezoning the section of West Church Street to provide a buffer between the business district and a largely residential area. Village officials scrapped the effort due to opposition from residents. Barnum admitted that while she and residents want the village to restore and preserve the Potter House, it may not be financially feasible.

A 2019 engineering report commissioned by the village identified more than $800,000 in repairs and renovations that would be necessary for public use of the building to continue. It flagged problems with the Potter House’s wood siding, electrical wiring, ceilings, wood flooring, and other areas, including a lack of gutters on the roof.

Barnum blamed village officials and said they’ve neglected the property over the years.

“The house is completely run down,” Barnum said. “It looks way worse than when they listed it.”