Fairport installs new historic marker with a nod to the Senecas

The new marker, out front of a yellow colonial house on South Main Street, is a modern replica of the ubiquitous blue and gold cast-iron plaques that New York erected between 1926 and 1969 at sites deemed to be of “historic significance in the colonial, revolutionary or state formative period.”

The marker it replaced went up in 1949 and paid tribute to the legacy of an early settler of European descent in the area, and his progeny.

The new marker makes no mention of a child, states that the house was built much later than originally thought, and gives a nod to the native people of the area. 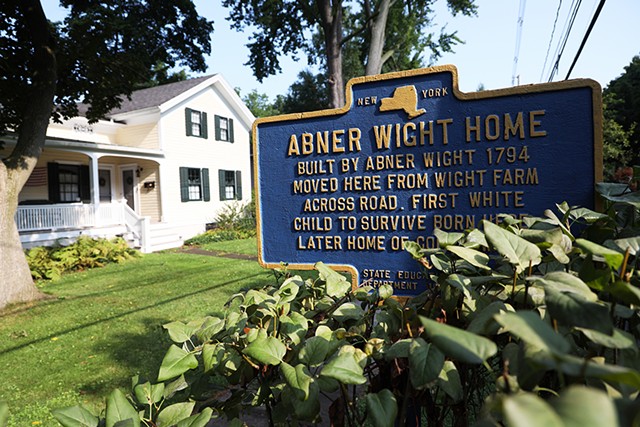 Bill Poray, the historian for the Town of Perinton, which encompasses Fairport, and who was instrumental in the campaign to replace the sign, said that noting the birth of the first white child in the village was of no historical significance.

“It’s a story that could be told in every little community in America,” Poray said. “It happened everywhere and so it doesn’t seem to be the most notable thing to put on an historic marker.”

“I also feel,” he added, “that adding the reference to the Senecas, we’ve never had a historic marker that points out the significance of the fact that all of this area was part of the Indigenous population’s land.

“This a small step in the right direction in my view, but I think it’s a very positive step and I hope it’s interpreted that way.”

It was not unusual for early American settlements to commemorate the birth of their “first white child.” Plaques marking such an event can be found in cities big and small, suburban towns, and on rural roads across the country.

New York does not keep a reliable inventory of its thousands of historic markers. But a partial inventory compiled by the Association of Public Historians of New York State shows six markers that celebrate “the first white child” or “first white children” or the “first white native.”

Fairport village workers removed the old marker outside the Abner Wight House in September 2020 after a resident complained about the “first white child” wording.

The matter unfolded amid a nationwide racial justice reckoning and as village residents reflected on two high-profile incidents that for many people underscored the homogenous makeup of the village, which is 97 percent white.

In the first, an employee of a prominent business, Fairport Brewing Company, removed Black Lives Matter-themed artwork posted around town. A few weeks later, swastikas and other racist graffiti were spray-painted on the walls of the Pines of Perinton, an apartment complex that serves low-income tenants.

Poray and Fairport Mayor Julie Domaratz unveiled the new historic marker on South Main Street before about 60 students from a nearby school. Neither made reference to the omitted “first white child” language in their formal remarks.

“A lot of communities used that language when they erected these signs in the ’40s and ’50s and it was acceptable to the current thoughts about history,” Domaratz said in an interview after the unveiling. “I think . . . that we should have a little more understanding that all the history is our history, not just the white history.”

Around the country, “first white child” signs are being reconsidered with fresh eyes. In 2018 in Mankato, Minnesota, for instance, officials removed a “first white child” plaque from a state park, citing guidelines that prohibited the posting of signs that could be interpreted as favoring one culture over another.

The sign outside the Abner Wight House was paid for by the William G. Pomeroy Foundation, which started the New York State Historic Marker Grant Program in 2006.

Lynn Barber, whose family has lived in the house for three generations, said the former sign was “insensitive” and “dismissive of the Indigenous population.”

“It kind of made me grit my teeth,” Barber said. “And that it had been here so long and that to the original creators of the sign that was one of the important pieces of information is painful.”