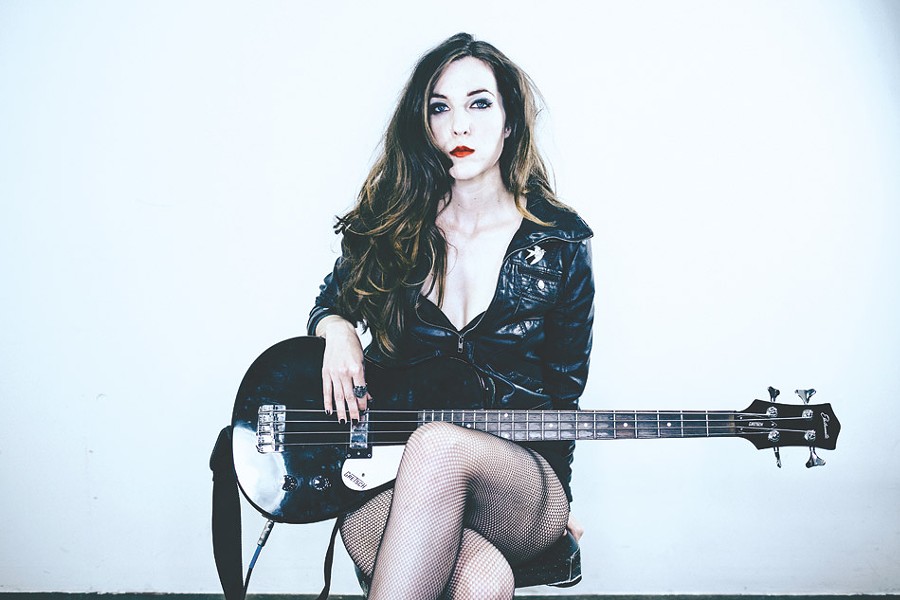 Rock 'n' roll in the atomic age — what with its social fallout — presented more of a threat than the bomb. With its savage heat, beat, and promise of promiscuity, rock 'n' roll threatened the very soul of 1950's white picket fence, Granny-panty America. Libidos were honed and the color line got faded, blurred, and ignored by those mixing cultures into a banshee wail. Things would never be the same again. But the gentry got wise to itself, adopting rock 'n' roll's surface affectations. Then Elvis got a haircut and joined the army, Chuck Berry went to jail, Buddy Holly went to heaven, the British invasion happened, and rock 'n' roll lost its cool, its menace. Rock 'n' roll lost its balls.

There have always been pockets of musicians that brandish rock 'n' roll's rude attitude and moxy, especially now. There are artists like Barrence Whitfield, JD McPherson, Legendary Shack Shakers, The Dirt Daubers, Los Straitjackets, Nikki Hill, and of course the fab femme fatale, Jessica Lee Wilkes, to remind us of when it was raw and righteous and a little bit dangerous. Before you go ga-ga over this long-stemmed beauty, be warned: Wilkes's music will charm and disarm you, leaving you a candidate for orthopedic hats. She's a killer diller; part wolf howl, part wolf whistle. And she's part Rochesterian, having grown up in Fairport.

Mrs. Wilkes (ball and chain to Legendary Shack Shaker's Col. J.D. Wilkes who she also plays with in The Dirt Daubers) checked in to discuss early rock 'n' roll, her new EP, and how to facilitate a sweaty mess. Look out... An edited transcript of that conversation follows.

City: Discuss your musical upbringing. When did you first hear rock 'n' roll and what happened?

Jessica Lee Wilkes: Like most kids growing up, I delved into my parents' record collection. It was mostly classic rock, like the Rolling Stones, Led Zeppelin, The Beatles, CCR, stuff like that. It was definitely a gateway into all of the music I got into as I got older. My dad had a John Lee Hooker record that I got my hands on as a young teen. I heard "Boogie Chillun" and it was all over. It was a game changer for me. I started saving up my money to buy blues records. Howlin' Wolf, Muddy Waters, stuff like that.

When and how did you meet J.D.?

We met at a Shack Shakers show in Chicago. A friend of mine worked for a local music magazine in town and she was doing an interview with J.D. She dragged me along to the show, and I met J.D. before he performed. When he and I were chatting, I was under the impression that he was the shy, nerdy, merch guy for the band. I was way off. The rest is history, as they say.

The Dirt Daubers have changed dramatically. What do you attribute that to?

Well, we just decided to make a rock 'n' roll record. J.D. and I were both writing bluesy, rock tunes, and it made sense to go with the natural creative flow that was happening at the time. You never know; we may go back and record another old-time record someday. I guess that's our prerogative as fickle, artist-types.

What has influenced the sound on "Lone Wolf"?

I listen to all types of music, but it's definitely heavier on the old-school rock 'n' roll, soul, blues, R&B, kind of thing. I think that comes through on this record.

What do you look for in a singer-performer?

Aside from the good melodies and clever lyrics, I want to see someone that pours it all out on stage in a genuine, visceral way. I feel like we, performers and spectators alike, have all become too self-aware and too-cool-for-school, and there's this strange trend toward stoicism at live shows. It's rock 'n' roll, for Christ's sake. It's supposed to be sweaty and messy, and it's nearly impossible to achieve that if you're just standing there, stifling your emotions, and worrying about how the person next to you might judge you.

What do you give as singer-performer and what do you offer that bands or artists in this scene don't?

Well, I don't really know yet. It's still so new. I hope to facilitate the sweaty mess that I mentioned in the previous question. I want people to have a good time and leave the show feeling like they got a break from their troubles, if only for a few hours.

How do you keep it fresh and at the same time so gloriously vintage?

I write what comes naturally. It's pretty obvious what my musical influences are and, yes, it's a lot of old-school 50's rock 'n' roll, blues, and R&B. That being said, I still live in this time and place and my song writing can't help but reflect that. I would never limit myself creatively for the sake of sounding "vintage." I just happen to be drawn to that era of music and recording. There's still so much that can be done within that style.

What does a great show equate to you as an artist?

My favorite shows are the ones where I lose myself onstage and everything syncs up: the band, the audience. It's such a cathartic experience. That's actually why I love playing at Abilene. It always seems to happen like magic there.

I'm hitting the road pretty hard this year with this new project. I'm always writing and thinking about the next thing. I hope to have a full-length record out by this time next year.

What's a dream collaboration or project you'd like to do?

I just want to keep working with like-minded and talented musicians. That's harder to come by than one might think. That's my idea of a dream collaboration.