A tale of two+ cities

The origin of the current show at 1975 Gallery goes back to the early 90's, when gallery director Erich Lehman attended college with one of the featured artists. "Vulnerable Geometry," features the work of three current or recent Denverites. After college, Lehman's fellow RIT student, friend, and artist Vincent Comparetto moved to Colorado, and Lehman would take snowboarding and skateboarding road trips to visit his pal. Lehman's passion for art, combined with connections in the city, guided him through Denver's indie art scene.

"It's really fun, really grassroots, and there's a lot of good stuff that's come out of there over the years," he says. 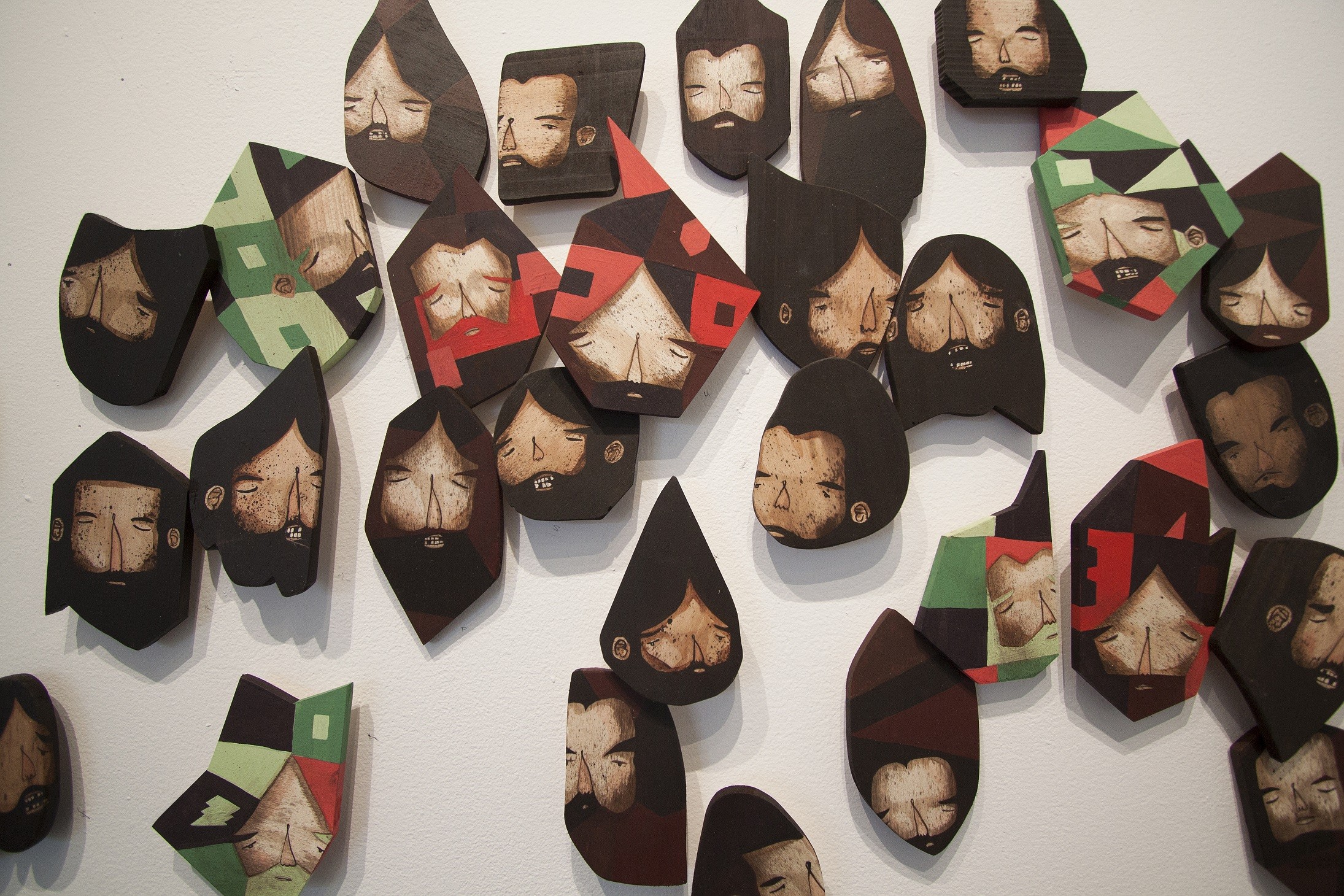 Through Comparetto, Lehman met Max Kauffman and Jaime Molina and dug their work. Now, this show features works by those two artists, along with Comparetto. After years of speaking with artists and galleries in various cities, Lehman grew interested in starting a "city swap" series of shows, through which galleries in different locations would present pieces by artists from different cities. Through such an alliance, artists gain new, fresh audiences for their work, and galleries increase their pool of artists. Though Lehman has many irons in the fire toward this end, he's already been pulling outside artists into the Rochester fold through 1975 and his work as lead organizer for Wall Therapy, Rochester's annual street art festival.

Several pieces in "Vulnerable Geometry" fall under the burgeoning genre of Neue Folk, characterized by an excavation of traditional, often self-taught skills and techniques. These traditions are applied to a modern context, while keeping visual storytelling at its core. Last fall, Kauffman guest-curated a group show under this theme at LeQuiVive Gallery, a collectively operated space in downtown Oakland.

At 1975, pieces by each artist, as well as collaborative works, are presented in mixed groupings, which serves to showcase both the diversity of their styles and how well they work together.

"The unifying factor is the use of geometry, whether in the loose forms of Kauffman's work, or tight, rigid stencil style of Comparetto, or the middle ground with Molina's work," Lehman says.

Through the years, Lehman has played witness to Comparetto's progression as an artist. "When I knew Vin as an undergrad, he was like a Rauschenberg Junior, though I didn't know it at the time," says Lehman.

The first piece of art he ever commissioned was a highly personalized lightbox assemblage made by Comparetto. The artist now creates layered collages of stenciled geometric forms, building impressions of cityscapes from drawings made during his annual adventures in strange cities.

The tidy, structured works appear at first glance like a stew of floating, colorful shapes, but as the eyes patiently settle in, the scenes gain a delightful depth and complexity, yielding many surprises. "Le St. Andre" is a midnight and pastel lime-hued street scene, fragments forming architecture, sculptures, signage, rooftops, roadways, and nearly-abstract passersby, all reduced to planes of color representing highlights and shadows. 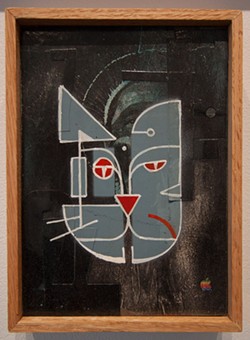 Comparetto's "Selena -- Paris" centrally features the face and bust of a woman, her delicate features crowded by lofty rows of windows, and in "I Hunt at Dawn," a fox is suspended mid-pounce above a crowded scene of streets, signs, and storefronts. Breaking away from the urban scenes is Comparetto's whimsical "Meow Haus" series of feline faces that mimic the Bauhaus movement's clean shapes and lines.

Max Kauffman is originally from Indiana, spanned some time in Denver, and recently relocated to Oakland, Calif. His dreamy, gritty works range from the small "Artifact 9" -- a stormy wash of texture and pigment on wood -- to larger, more complex worlds on paper. In the latter category is the highly detailed "Sanctum," in which washes of color, planes of dusky ink, and areas of heavily-patterned doodling create a mystery house, its roof peak perfectly echoing the mountains beyond, and boxy islands of shapes out front.

Kauffman's work is full of shambling, shifting perspectives that together attempt to reveal the inner and the outer nature of things, from above and straight-on, offering a disorienting glimpse into a highly imaginative, private realm.

Originally from Buenos Aires, Denver-based artist Jaime Molina creates simply-rendered, yet highly expressive, faces embedded within an abundance of bright, geometric patterning that forms crystals and architecture. His more complex works vaguely remind me of a less gilded Gustav Klimt, with their swooning faces drowned in abstraction. In the large mixed-media-on-paper piece, "Geommercise #3," a sleepy face peeks from a monumental burden of patterning, letters, and a spectrum-spewing skull.

Molina's sweet-faced, bearded gentlemen are a recurring presence throughout his works in the show, including the collaborative "Cutty Heads" installation. This wall-mounted swarm-cloud of cut-wood forms are painted with a range of emotions, from a fearful grimace, to dreamy confidence, to unabashed consternation. Some of these mini vulnerables are missing teeth, many close their eyes against the world, brows sorrowful. "I love that such a range of human emotions and experiences can be achieved with the barest, simplest lines," Lehman says.

The larger, central grouping of heads are the work of Molina, with tiny ears and wee weary faces treading a dark sea of hair, some with red or green geometric forms stacked on their noggins. A smaller cluster to the left was begun by Molina, but finished by Kauffman. These are more abstract -- penciled features are swiped over jarringly with bright pink, blue, orange, and white, or become a petal-eyed skull, or faces that are not faces at all. To the right is Comparetto's Bauhaus bunch, standing out with their theatrical features, emotions masked like sly Carnival revelers.