Exhibit Review: "The Museum of Failure" at Hartnett Gallery

PHOTO BY MATT DETURCK "The Museum of Failure" at Hartnett Gallery.

“The Museum of Failure”

Though Thomas Edison was a concept thief and a bad wolf of a businessman, I've always appreciated this paraphrased quote attributed to him: "I haven't failed, I've just found 10,000 ways that won't work." We are essentially momentary blips on a vast radar, signifying little unless we create some significant impact. And to our egos' undying frustration, the outcomes of our endeavors are impossible to predict. Logically, there have been far more failures than successes along the way to now. The current installation at the University of Rochester's Hartnett Gallery explores the nuanced stories of missteps and mistakes within Western culture in such a lighthearted fashion, that the pride and joy of humanity's forward march begins to look like one giant face-palm.

Under her identity as The Great Moments in Western Civilization Cooperative, Buffalo-based Caitlin Cass spoofs all over the Western Canon with her traveling, ever-evolving, craft-tastic "Museum of Failure" installation. As explained in her artist statement, Cass's work is "fueled by humanity's urgent, often ill-fated, desire to reach beyond itself," and "strives to expose, honor, and commiserate in a history riddled with mistakes and uncertainty."

Hartnett's site-specific iteration of the Museum is a theatrically staged, maze-like installation of tall panels peppered with curtains, comics, drawings, assemblages, and a video. It is all centered around an embroidered "Tapestry of Failure," which isolates momentous dramas from humanity's history and cultural stories, which, for better or worse, got us to where we are today. Hand-painted, stylized lettering takes on personality and emotion, and illustrations open little windows to worlds of the past.

Cass transforms actual failures into a kind of folklore, which involves some sarcastic summarizing of events in order showcase the morsels of morals she finds in each story. If history's revisionists can sell the shiny, streamlined versions of our successes, Cass will deliver the realness and tell you why they actually kindasorta sucked, too. The museum is as empathetic as it is irreverent -- Cass is ultimately a friend of folly, inspiring her viewers with the knowledge that if history's audacious greats were also so royally afflicted by gallant missteps, then perhaps greatness is also buried within our own bushel of blunders.

A few posted suggestions encourage visitors to not feel forced to read everything in the show, to shrug off the limiting burden of academia's authority, to know that we know nothing. Cass also includes a warning to mind the abyss, which is symbolically located within the museum itself, right after the bit about how it obsessed and then just about consumed Rorschach whole. 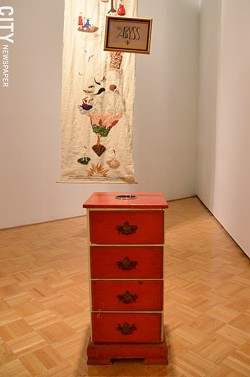 In addition to considering outright failures, the exhibit itemizes some previously under-examined failures hidden within -- or disguised as -- successes. Also, we snicker at so very many ideas taken quite seriously in the past, and should perhaps operate with that knowledge today, and set no science in stone. Everyone is fair game to Cass, from simple would-be inventors, to great thinkers, to entire empires.

Immediately facing the entrance to the maze is a short, looping video of Franz Reichelt, an early 20th century tailor who was among the early engineers of failed suits intended to fly, captured the moments before of his leap from the Eiffel Tower. The jarring film is the only element in the show that places us with the subject at the moment of failure, and we move with him through hesitation, to resolve, to the inglorious drop, and then separate from him for a distance shot to witness his tiny body crumple and raise dust amid his fabric shroud, crushed by the planet's cruel embrace. Nearby, Cass's illustrations and text tell Reichelt's tale in all of its absurdity, but the inclusion of the video humanizes his "iconic fit of human striving," as she calls it.

A lengthy illustrationsuspended from above the exhibit moves viewers through time. It chronicles how the acquisition of opposable thumbs spurred the immediate manufacturing of weapons, several instances where ambition and curiosity unleashed the contents of Pandora's proverbial box, that time when Europeans sent tykes to do their dirty work in the "Children's Crusade," but sold them into slavery instead, the baffled victims of the Bubonic Plague, helpless amid serious squalor, and details of unmentioned repercussions of the printing press and encyclopediae.

I can practically see Cass sitting in the back of a Western Civ course, listening to the lauded leaps in progress. Not so fast, she'd snort. During the Roman conquest of Egypt, spite and a severe lack of foresight resulted in the destruction of the Great Library of Alexandria. The port city's institution of lecture halls, meeting rooms, gardens, and an estimated 400,000 scrolls, filled with knowledge copied from books collected over untold years, was reduced to ash. In addition to a diminutive, informative comic strip, Cass invites you to peer into history through a miniature diorama box at the frozen moment of conflagrated knowledge, to feel the gravity of so many snuffed torches of truths -- not to mention our reduced understanding of some of Africa's great historic civilizations.

Around the corner, Cass lambasts men who "meant well" but introduced industrial waste or religio-political wars. Depantsing the hell out of people on pedestals, she then gives each of "Those Indolent Greeks" a giant wedgie with a portrait and imagined confession for several ancient philosophers and mathematicians.

In "Nietzsche's Madness," the text takes on the rambling wave form of rushing and retreating thoughts. Immediately after "Rorschach Confronts the Blot," we encounter The Abyss itself, a well of gloopy India ink. The pitchy mess, from which words and sense arise and return, is an ongoing theme throughout the show, and within Cass's inky drawings themselves. Western history's winding path ends with a slideshow of Cass's illustrations and with cards, a pen, and ink with which visitors may suggest "answers" to an unasked question.