When we come to admire an artist's work, what we see is the expert representation of form and gesture, the elegant depiction of balance, and the rich tones carefully chosen to lead our emotions here and there. What is hidden from us are the long, laborious hours and obsessive repetition required for achieving the necessary muscle-memory, and the blood, sweat, crushing doubt, and stubborn dissatisfaction that accompany a person's resolve to master one medium, or many. But, as evidenced in Memorial Art Gallery's current show, those who fully dedicate themselves to their craft can achieve greatness. The dual exhibition brings together masterful works from the print portfolio of French artist Henri Matisse and the stunning ceramic works of his American great-grandson, Alexander Matisse. 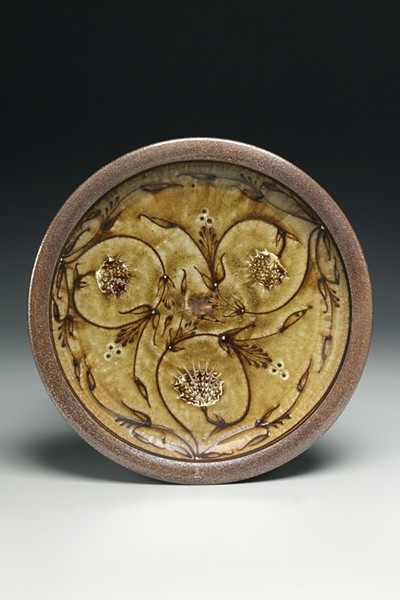 It's easy to detect what makes Alexander Matisse a different kind of artist from his great-grandfather. As painter, sculptor, and printmaker, Henri was prolific in several media and known for his figurative work, while Alexander's star is on the rise for his beautifully constructed and functional ceramic work, which carries the torch of the centuries-old Carolina pottery tradition. But by bringing together examples of their work, the MAG offers a unique opportunity to explore how each has manipulated his medium to showcase the pleasing curves of earthly forms, the grace of proportional balance, and the power of subtly- or richly-adorned bareness.

The "Matisse as Printmaker" exhibit is drawn from the Pierre and Tana Matisse Foundation, and highlights the quantity and diversity of Matisse's printmaking oeuvre from throughout his career. Included here are examples of his work within the aquatint, drypoint, etching, linoleum cut, lithograph, monotype, and wood cut techniques.

"Seated Nude, Viewed from Behind" is a striking 1913 crayon transfer lithograph. The fewest possible lines form hair parted in two cloudy mounds resting on hunched shoulders, and the undulating curves of her back, hips, and hand. Matisse's range of style even within the same medium is underscored with examples from his more fleshed-out tonal mode, such as "Large Odalisque with Bayadère Culottes," dated 1925.

Decades are represented in wood cut nudes amid a buzz of kinetic patterning, a series of expressive faces captured in thick strokes of lift-ground aquatints, and repetitions of themes with studied, just-so variations in each. It's clearly seen in a 1929 series of small, linear etchings of a woman dreamily staring into, away from, and eventually, dreaming next to a fishbowl.

Though Alexander is the great-grandson of Henri Matisse, the fact is not something you'll find boasted on his East Fork Pottery website. The ceramicist simply states that he comes from a family of artists, which is true, as Alexander was raised by two artists whose work ethic and creativity are evident influences on him. Though he has quite a few gallery exhibitions on his resume, this is the first museum show for the young artist, who was born in 1984.

One megalithic lineage might be daunting enough for most people to tackle, but Alexander's trajectory led him to adopt a second artistic heritage: that of the Carolina pottery tradition. Born and raised in New England, Matisse briefly attended Guilford College in North Carolina before committing himself to a three-year apprenticeship in the workshops of North Carolina potters Matt Jones and Mark Hewitt. In 2010, he founded and constructed East Fork Pottery outside of Asheville, N.C., where he and a growing collective of craftspeople within this tradition offer works from three-to-four massive annual wood kiln firings.

In 2012, after MAG staff added the "Matisse as Printmaker" exhibit to the future lineup, two different colleagues approached MAG Director of Exhibitions, Marie Via, about the French artist's great-grandson, who was making a comparatively quiet but impressive impact from his small studio in North Carolina. Contact was made, and Alexander agreed to gather some of his work to accompany the exhibit of his great-grandfather's prints.

This exhibit showcases Alexander's work from the past five years. Matisse's expertly formed range of vases, chargers, and pitchers are each objects of utility and beauty. His "Urchin" forms are squat vessels with small mouths, and range in size from able to fit within two cupped hands, to another too large to enclose with two arms. Offered in a similar range of sizes is the "Ometto," a sculptural, closed vessel which Matisse says he pulled from the tradition of poor families unable to afford head stones, who would hire potters to make these forms to serve as inexpensive grave-makers.

Matisse's work nods to the Carolina tradition not only in form, but also in the "undefined, ruddy, and serendipitous" surface treatments, he said at his Sunday, April 6, artist talk held at MAG. These ash and salt glazing techniques not only make the wood-fired works functional by sealing the porous surfaces, they also contribute a gorgeous -- and unpredictable -- richness in texture and tone. The drippy ash glaze creates a subtly dazzling, crystalline appearance, showcased beautifully here under the care of MAG's lighting designer, NicMinetor. A more structured layer to the surface design is added to many pieces: elegant organic or geometric patterning is achieved through Matisse's steady hand at slip trailing, a traditional technique of adding low-relief patterning by painting with watery clay.

Though he draws from the Carolina tradition's vernacular, Matisse is always honing and evolving his craft, which makes for frustrating days, even at his level.

"One's eye always learns faster than the hand," he says of trying moments at the wheel. The lovely work may speak of nostalgia for a slower, mostly bygone era, but it is anything but stale. Amid art movements which strive ever to capture the next newest thing, Matisse is comfortable making his statement as a bridge, pulling the past into the present.

"To be a potter in the 21st century is a form of quiet protest in itself," he says.

This article was updated on April 8 to clarify a pottery technique used by Alexander Matisse.