Rochester is regularly called a "city of the arts" by politicians and cultural movers and shakers alike. And while many people working within the arts sector grumble about the need to increase funding streams and better organize the infrastructure to support artists and institutions on every level, what they say is true — this town is filthy rich with creatives, arts programming, and places to see art. Aside from the household-name, established institutions, Rochester has dozens of medium-sized "white walls" galleries, smaller venues that support emerging artists, impressive university galleries, and installations of public art.

On any given week these spaces offer dozens of diverse exhibits, artist talks, and cultural lectures, but there are also dedicated days of the month, such as First Fridays (firstfridayrochester.org) and Second Saturdays, when scores of galleries and art studios host simultaneous art openings and events for the art-trekking public.

In between all of the formal offerings, there's the any-day-of-the-week opportunity to get out and take in the city's vibrant public art and street art scenes. In addition to stand-alone sculptures peppered throughout city parks and other public spaces, scores of Rochester's buildings are adorned with murals by Rochester's well-established graffiti crews (most notably the hyper-talented FUA Krew) and muralists with studio practice backgrounds.

Notable folks In that latter group include Sarah Rutherford, whose monumental paintings in the "Her Voice Carries" series celebrate women in Rochester and beyond who positively impact their communities, and Brittany Williams, who has worked alongside Rutherford as one of the lead artists for Roc Paint Division, the city's youth mural arts program. Both Rutherford and Williams are alumni of the independent annual mural festival, Wall\Therapy, which since 2011 has installed more than 130 works by local and international artists all over Rochester, and has also presented programming such as the Arts & Activism Conference.

Rochester's big, established arts institutions are few in number but have a big impact. Functioning as both a vibrant contemporary exhibition space and museum to 5,000 years of world history, the University of Rochester's Memorial Art Gallery (500 University Avenue, 276-8900; mag.rochester.edu) has a collection of more than 12,000 works of art and cultural artifacts from across the globe. The institution's major Docent's Gallery hosts traveling exhibitions as well as shows curated in-house, and its smaller Lockhart Gallery functions mostly as an educational showcase of works on paper from the MAG's collection. Additionally, the public can take classes at the Creative Workshop, where established artists teach studio classes to all ages. 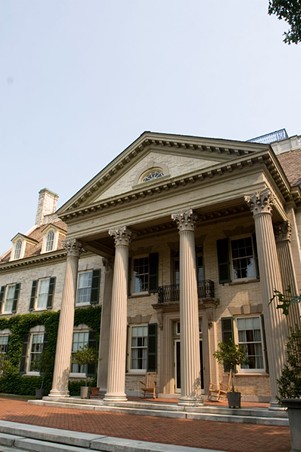 The internationally-renowned George Eastman Museum (900 East Avenue, 327-4800, eastman.org) functions as both an exhibition space for contemporary and historic photography as well as a museum dedicated to the history of photography and Kodak founder George Eastman's impact on Rochester and the world. The estate features a contemporary building — which houses galleries, archives, and workshops — that is built right up against Eastman's historic mansion. Also on the grounds is the Dryden Theatre, which hosts film screenings, film festivals, and the annual Nitrate Picture Show. The museum offers a number of historic photo processes workshops and hosts the Jeffrey L. Selznick School of Film Preservation, which is a world-leader in conservation studies for moving images and audio-visual formats.

Another heavy-hitter with an expansive collection is Artisan Works (565 Blossom Road, 586-3535, artisanworks.net). The massive warehouse off Atlantic Avenue is a spectacle with thousands of works of art by established and emerging artists alike, displayed in a chaotic crush that invites hours of exploration, as the collection is less traditionally-curated than most. With on-site studios, there's a good chance you'll catch artists in action, too.

Rochester Contemporary Art Center (137 East Avenue, 461-2222; rochestercontemporary.org) straddles the little-guy/big-influencer boundary as a small institution that does a lot. RoCo spotlights local, national, and international artists and collectives in one-off exhibitions. It also organizes annual and biennial exhibition series; hosts artist talks, lectures, and other programming; and facilitates collaborations with other arts and cultural institutions in Rochester and beyond, promoting micro and macro discussions about the regional state of the arts.

We'd be remiss if we didn't note the great work of the smaller, independent arts and cultural spots in town, such as the Baobab Cultural Center (728 University Avenue, 563-2145, baobabcultural.org). The center has an indispensable wealth of information about African cultures and the history African diaspora pre-dating the Transatlantic Slave Trade. It also hosts community meetings, music, yoga, art events, and weekly Friday film screenings and discussions that emphasize the history of Civil Rights activism and contemporary issues.

The UUU Art Collective (153 State Street, 434-2223; uuuartcollective.com) is helmed by a young group of friends who steadily evolved their operation over a few short years to become the hip-meets-professional white walls space it is today. In addition to showcasing local and regional artists, the UUU represents a handful of emerging artists from New York City and abroad. The spot regularly hosts musical acts of all genres as well as community events, and has become a hub for helping young artists find their footing.

Joy Gallery (498 ½ West Main Street, 436-5230, facebook.com/JoyGalleryAndStudio) is owned and operated by watercolorist, sculptor, and RIT professor Luvon Sheppard. The spot is both his studio and an exhibition space that hosts student exhibitions and work by local and regional professional artists.

Though it had a glorious run as a white-walls space that presented contemporary work by local and national artists in the low-brow, horror, skate culture, graffiti, and illustration scenes, 1975 Gallery (1975ish.com) is currently an itinerant but active endeavor. Owner and curator Erich Lehman collaborates with different venues to host occasional exhibitions. He also collaborates with other arts organizations on a variety of programming efforts and is the lead curator of Wall\Therapy.

Notable among Rochester's many artist studio hubs and art collectives are The Hungerford (1115 East Main Street, facebook.com/TheHungerford), Anderson Alley (250 North Goodman Street, andersonalleyartists.com), WOC Art Collective (215 Tremont Street, facebook.com/WOCArt585), The Refinery (936 Exchange Street, refineryrochester.com), and The Yards Collaborative (50-52 Public Market Way, theyardsrochester.com). Each spot has its own mix of art studios, exhibitions, arts facilities, and programming worth keeping on your radar. Some of them also have artist residencies.

Our region's many academic institutions each have gallery spaces with varying missions, but among them, the following spots stand out for their dedication to excellence in exhibitions and programming that benefits not only to the matriculated students but to the general public as well. Rochester Institute of Technology's University Gallery and Bevier Gallery — both located on its Henrietta campus — are noteworthy, but RIT also facilitates shows and programming at its downtown RIT City Arts Space (280 East Main Street, cityartspace.rit.edu). Also located in downtown Rochester is Visual Studies Workshop (31 Prince Street, 442-8676, vsw.org), which offers an MFA program through The College at Brockport. With a distinct emphasis on activism and social justice, Visual Studies Workshop also hosts important exhibitions, film series, community symposia, and other programming. VSW has a drool-worthy print media, film, and video archive, an impressive residency program, and an active press that publishes artist bookworks.

Rochester also has a bunch of exhibition spaces within educational facilities, where you can take classes to learn various skills. Among these are Flower City Arts Center (713 Monroe Avenue, 244-1730, rochesterarts.org), where you can learn a variety of skills in the fields of analong and digital photography, printing and book arts, and ceramics; 540WMain (540 West Main Street, 420-8439; 540westmain.org), which functions as a "communiversity" that offers a variety of classes and workshops focused on combating inequity and encouraging community; and Rochester Brainery (176 Anderson Avenue, 730-7034, rochesterbrainery.com), which maintains a full calendar of classes and workshops covering just about every creative or DIY endeavor you could dream up.

And finally, we'll show some love for the "alternative spaces" in Rochester — the ones that aren't galleries or art houses per se, but consistently open their walls to showcase local and regional artists — and do a dang good job at curating shows. It's not uncommon for restaurants, bars, cafes, and other businesses to showcase local art, but the following spots do it in an intentioned, consistently good way. Good opportunities for local and regional artists can be found at The Little Theatre Café (240 East Avenue, 258-0403, thelittle.org), the Bug Jar's resident art curator The Lobby (219 Monroe Avenue, instagram.com/lobbyist), Lux Lounge (666 South Avenue, 232-9030, lux666.com), Fuego Coffee Roasters (1 Woodbury Boulevard, instagram.com/fuegocoffee), Lumiere Photo (100 College Avenue, 461-4447, lumierephoto.com), The Out Alliance's Gallery Q (100 College Avenue, 244-8640, outalliance.org/programs/galleryq), and The Avenue Blackbox Theatre (780 Joseph Avenue, 491-6730, avenuetheatre.org).