January 17, 2020
Chris Collins, who until his resignation last fall represented western New York in Congress, was sentenced to 26 months in prison for insider trading.

Judge Vernon Broderick, of Federal District Court in Manhattan, said in sentencing the former lawmaker that Collins betrayed his obligation to uphold the law, both as a member of Congress and as a director on the board of a drug company.

“You had a duty to meet, and you betrayed that duty,” the judge said. 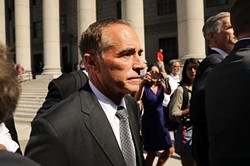 Collins, 69, delivered a tearful apology before he was sentenced.

"People feel sorry for me. They shouldn't," he said. "I did what I did, and I violated my core values."

The sentence fell short of the maximum five years for which prosecutors had asked, but was nonetheless a blow to a man whose political star seemed to be on the rise as an early and ardent supporter of President Donald Trump.

Collins pleaded guilty last year. He was on the board of an Australian biotech company, Innate Immunotherapeutics, when he warned his son, Cameron, that the company’s multiple sclerosis drug failed clinical trials.

The news prompted his son to dump the stock and avoid hundreds of thousands of dollars in losses. Cameron was also charged, along with his father-in-law, to whom he had passed along the news. Both pleaded guilty and are to scheduled to be sentenced next week.

Collins’s seat in the 27th Congressional District is currently vacant. A state lawyer said in open court last week that Governor Andrew Cuomo is expected to call for a special election that will coincide with the presidential primary on April 28.