Elizabeth McGriff is back in her house on Cedarwood Terrace, though the law is not on her side. She was evicted from the property in April.

McGriff's reoccupation has drawn the attention of national housing activism groups, who say that it illustrates a broader point. McGriff's situation is a common one across the country, and they want the Federal Housing Administration, which has backed countless mortgages, McGriff's included, to change some of its foreclosure policies.

"Our community is suffering," McGriff said after a Take Back the Land rally outside the house last week. "There's a lot of bank foreclosures in the community." 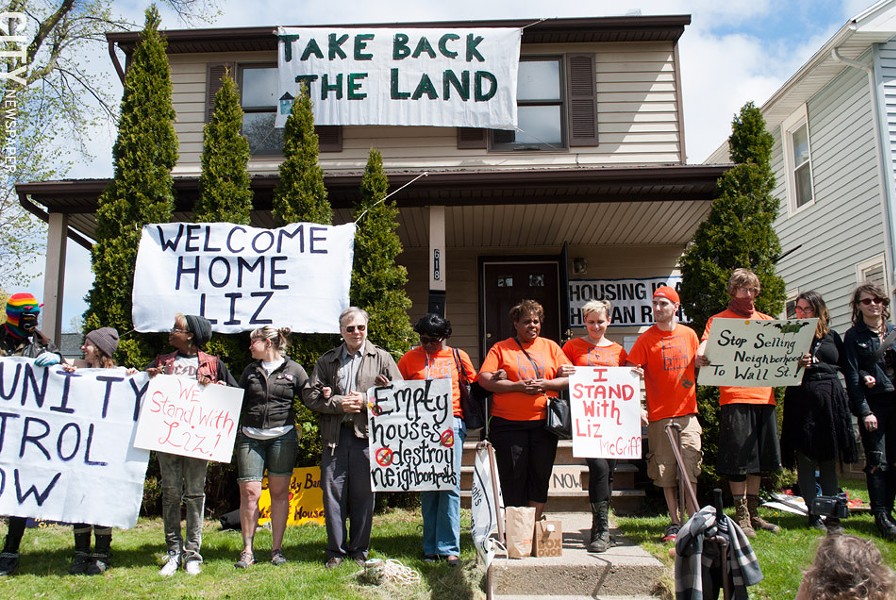 McGriff's troubles started when the economy tanked and she lost her job with the US Postal Service, she says. She eventually got a new job, but it paid less, and she was unable to work out new terms with the bank to bring her mortgage payments down to an affordable amount, she says.

The bank foreclosed, put the property up for auction, and then bought it for $115,000. It offered the house back to McGriff for $130,000, but that's way more than what she paid for it, she says, and well above its $73,000 assessed value. But that's how much the FHA will pay the bank for McGriff's default.

McGriff isn't asking for the house back, per se. The FHA would own the property after it pays off MidFirst, and she wants the agency to turn the property over to the Ujamaa Community Land Trust. The fledgling community-run nonprofit would then work with McGriff so that she could stay in the house on terms that she could afford.

The FHA has been bundling together distressed properties such as McGriff's, and selling them to the highest bidder. The buyers are often well-funded Wall Street investment firms.

Homes for All, a national group that Take Back the Land is working with, is calling on the FHA to instead give 30 percent of those troubled properties to community land trusts. The organizations would either rent the properties out or sell the houses and lease the land to the new owner.

Typically the trusts, such as Boston's Dudley Neighbors, Incorporated, have the right to buy back a house from the owner before anyone else gets a chance to buy it. The idea is to keep home prices and rents affordable.