Everyone is family at The Golden Fox

Many enterprises -- from corner groceries to corporate behemoths -- promote themselves as family businesses to project an image of folksiness, congeniality, and caring that is only sometimes deserved. But The Golden Fox Family Restaurant, the most recent focus of CITY's ongoing series exploring local diners, is the real deal.

As teenagers in 1969, brothers Peter and George Kasandrinos immigrated to the US from Greece. In 1973, they opened The Golden Fox (borrowing the name from a restaurant run by a cousin in Minneapolis) in a former soda fountain shop. After marrying into the family, Corinna Kasandrinos, who now runs the restaurant, came aboard in 1980.

Corinna is assisted by her daughter Effie, who serves; her son Mario, who greets and cashes out diners; her son Tony, who cooks; and son Alex, who does a little bit of everything. Even some employees -- the shortest-tenured has been there for 18 years -- have had children work there. Tony also has his own line of premium olive oils, pressed by Corinna's cousin, that he imports from his father's village in Greece, and which are available for purchase at the restaurant. Peter imports olives from the same village, which he marinates and serves in the restaurant.

Upon entering The Golden Fox, you notice exquisite cleanliness (along with various fox paintings and tchotchkes) and feel welcomed. This is unsurprising, given Corinna's earnest reasoning regarding The Golden Fox's successful longevity: "When I open each day, I feel like I'm getting ready for company coming over," she says, adding that her employees and customers are like family. "We really, really love our business; this isn't just a job to make money; we know who's having babies, who's getting married, etc. It's an honor that people choose us."

After my first visit there for this story, Mario raced out into the parking lot to chase me down and deliver my iPad, which I absentmindedly left on a table. On a subsequent visit while I waited to chat with Corinna, three employees offered me a seat and a beverage. An amiable focus on customers is only part of the charm; the food is tasty, well prepared, and a good value.

Even with a wide-ranging everyday menu, Corinna creates different specials each day in an effort to keep things exciting and fresh for her clientele, "which can be a challenge," she says, "but because I like this business, it's not a burden."

My friend Kent and I had a lunch of specials, starting with a thick and creamy Greek Avgolemono soup ($2.95), which had plenty of rice and chicken chunks, and a bright, genuine lemon flavor that made it especially delectable. Kent followed up with a well-seasoned, notably juicy Greek turkey burger ($9.95, with a side of crispy-tender sweet potato fries), topped with grilled homegrown zucchini, grilled onions, and homemade tzatziki. I opted for a classically delicious gyro in a soft, puffy, and nicely browned pita ($7.95), along with a side of homemade red potato salad, replete with chopped carrots and celery. Luxuriant, creamy, cinnamon-y homemade rice pudding served as my dessert.

On a bustling Saturday morning I returned for breakfast with my girlfriend Molly and her children, and we opted for a table in the more sedate back room. Once again, the service was affable and ardent. Molly ordered a Mexican omelet ($6.95; all omelets are three-egg), with fresh jalapeños that gave the dish a legitimate piquancy. She requested the accompanying home fries cooked until brown, and that's how they arrived -- each chunk crispy outside and tender inside. 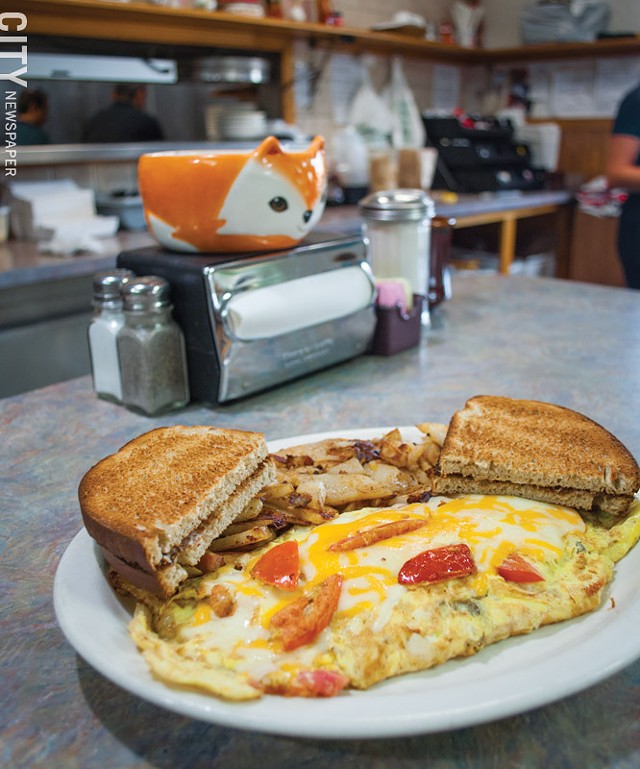 Molly's daughter Norah chose French bread French toast ($4.95). Assessing its virtues, she declared: "I have delicate taste buds and my delicate taste buds are sure liking this French toast." Younger daughter Jocey had the more standard French toast ($3.95), which she deemed "very fluffy and soft and still flavorful even without syrup." I selected the Mississippi Benedict (two poached eggs and sausage patties on buttermilk biscuits topped with sausage gravy -- $6.95), which had layers of distinct flavors and textures. The sausage was pleasingly, slightly spicy; the gravy was not glommy (a common pitfall); and the fluffy, flaky biscuits withstood sogginess.

On my final visit for this exploration, I felt compelled to choose either a hot turkey or roast beef sandwich, as these serve as my cornerstones of a solid diner. On this afternoon, I embraced the roast beef ($7.95, with mashed potatoes, of course), which excelled. Served appropriately on white bread, the plentiful roast beef was thinly sliced, and the mashed potatoes were real and smooth. And the star of the show, the homemade gravy, was neither gelatinous nor excessively salty, but expertly seasoned and an excellent match for the roast beef, bread, and potatoes.

As this was my first meal of the day, I was still hungry, so I proceeded to down a buttery, salty, and golden-crisp grilled ham and Swiss on sourdough, with equally golden-crisp-tender steak fries (mainly to serve as a vehicle for getting more of that brown gravy into my mouth).