PHOTO BY DAVID ANDREATTA The presumptive mayor-elect, Malik Evans, vowed a day after his Democratic primary win to run an "organized, disciplined, and focused" administration.
In his first news conference following a big mayoral primary win, Malik Evans vowed Wednesday to lead a clean, transparent, and issues-focused administration, and announced that he would begin assembling a transition team now.

Although more than four months remain before the general election, Evans became the presumptive mayor-elect when he handily defeated Mayor Lovely Warren in the Democratic primary, effectively knocking her off the ballot. He faces no other challengers.

His promise to run an "organized, disciplined, and focused" administration served both to separate his vision for his office from Warren's City Hall, which has been whipsawed by scandal, and jump off his double-barreled campaign message of transparency and "building bridges."

Evans attributed his win to his platform, which he dubbed his "Compact with the Community," and downplayed what effect voter disenchantment with Warren may have had on their choice at the polls. His compact is a series of policy proposals that target youth programs and employment, gun violence, support for senior citizens, and economic empowerment.

In his remarks and in answering questions from reporters, Evans steered clear, as he had throughout his campaign, of mentioning the mayor's personal and professional problems, which include a felony indictment on campaign finance fraud charges and her husband facing drug and weapons charges for what prosecutors allege is his role in a cocaine distribution ring.

“When you get down into the mud, guess what, the mud splashes back at you,” Evans said. “And I don’t have any mud on me, because we stayed positive. We wanted to run a campaign the same way we will govern this city: organized, disciplined, and focused.”

Evans, a member of the City Council, scored a landslide victory over Warren, securing 66 percent of the vote, according to unofficial results from the Monroe County Board of Elections. His term in office will end on Dec. 31 and, barring any unforeseen turn of events, will assume the mayoralty early next year.

When he does, he will inherit a $561 million budget that narrowly passed the City Council and which he opposed. Evans is the head of the council's Finance Committee and had objected to what he previously characterized as too little conversation among city officials about specifics of the spending plan.

"You work with what you have," he said. "It's not a terrible budget. My challenge with the budget was the process."

Evans, who has been in elected office in one capacity or another since 2003, when voters sent him to the Board of Education, took pains to distance himself from the "career politician" label.

His day job during his time in office has been in the financial services industry, which he will have to leave to assume office as mayor. Unlike serving on the school board or City Council, which are by statute part-time paid positions, the mayoralty is a full-time job.

“I always get scared of being labeled a career politician, and I hope that I can never be labeled that,” Evans said. “My career has been in financial services, and I’ve done my service (in office) to enhance that. To whom much is given, much is expected.” 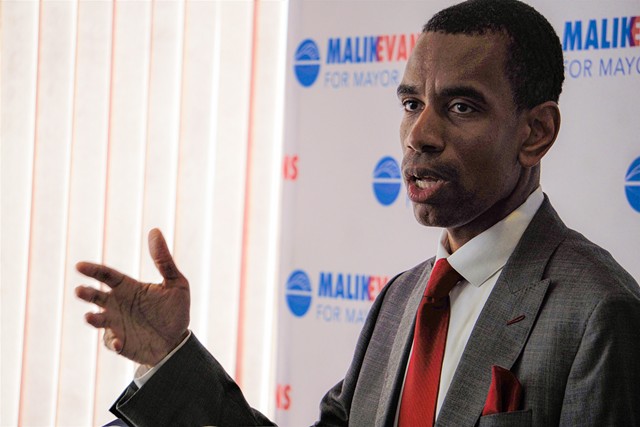 Evans said he sees the role of mayor as one of "service," and that his time in office has enabled him to foster good working relationships with former mayors, Tom Richards, Bob Duffy, and Bill Johnson.

One of his immediate focuses until he takes office, he said, will be increasing the COVID-19 vaccination rate in city neighborhoods. According to state data, less than 30 percent of eligible residents in the 14614, 14605, and 14613 area codes have completed a vaccination series, compared with almost 55 percent of the Finger Lakes Region as a whole.

“We have two of the lowest vaccination rates in New York state,” Evans said. “I believe that with the Fourth of July coming, as well as the summer months, I believe it is absolutely vital that we have herd immunity.”

Evans also said there was no time to wait to attempt to curb the gun violence plaguing Rochester. He noted that city school officials had announced recently that they were opting to move some celebrations to close out the academic year indoors for fear of street violence, and said he twice came upon the aftermath of two murders while walking the campaign trail.

“I witnessed and was close to this violence almost firsthand on two different occasions while on the campaign trail out talking with voters on Scio Street and on Genesee Street,” Evans said. “I was at both of those locations within hours of murders taking place.”

This year to date, the city has had 31 homicides, 70 percent of which were shooting deaths, according to the Rochester Police Department.

At times, he chided members of the media for what he suggested was their over-reliance on outside political observers, typically political scientists from local universities that he called the "political chattering class," to frame their coverage of the primary race leading up to the election.

Most of those analysts predicted a Warren victory, although some changed their opinions in the weeks leading up to the election following her husband's arrest, sensing, like many in the city, that the electorate had had enough of their mayor and city making national headlines for all the wrong reasons.

In the same breath, he pledged to be accessible to journalists, calling their role in a functioning democracy "critical."

By contrast, Warren was guarded with the press and tightly controlled her messages. She outright refused to speak with some local journalists whose coverage of her she felt reflected negatively on her administration.

Evans said his administration will be forthcoming and responsive.

“I won’t ban any media people, although sometimes I think about it, I won’t do it,” Evans said, jokingly. “But I will make myself available because, guess what, at the end of the day it’s the taxpayers that pay your salary, not the private sector.”