[REVISED 9/16/21] This article has been updated with the correct street name of Rashad Smith's childhood home.

The bike-sharing service HOPR has added eight new docking stations around Rochester — providing 64 additional bikes and scooters  — in neighborhoods whose residents are least likely to have cars.

The initiative — a collaboration between HOPR, the local bicycle advocacy group ROC Freedom Riders, Regional Transit Service, and the city — was funded by a $240,000 grant from ESL Federal Credit Union.

“For neighborhoods to thrive, mobility via reliable transportation is a necessity,” said Ajamu Kitwana, an ESL vice president, who helped announce the partnership on Wednesday at The International Plaza on North Clinton Avenue, where a new docking station was installed.

ROC Freedom Riders co-founder Rashad Smith said that expanding the network of bikes and scooters was a way to "continue to provide solutions to impact the most marginalized communities in our city." He spoke from a podium near the spot where he grew up in a house on Sullivan Street that was razed for the plaza. 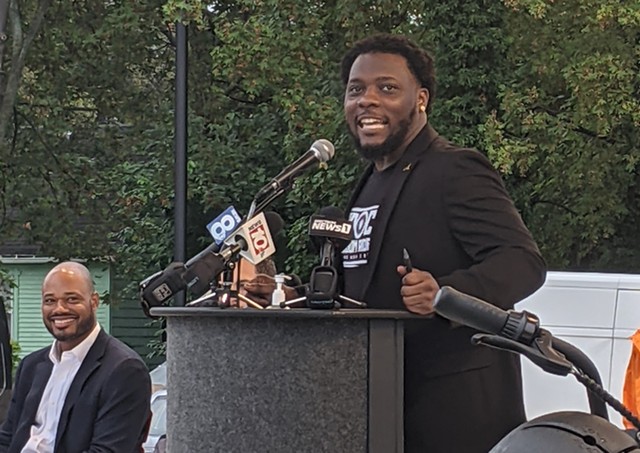 “We were not rich,” Smith said. “We weren’t well-off, or even middle-class. In fact, we say we struggled, but in reality we were poor. And we knew that our ZIP codes impacted resources, access, and opportunities.”

“This indeed," he added later, "is the true story of our Black and brown families in America."

The expansion of the HOPR network comes at a critical time, when city schools are struggling with a shortage of bus drivers that has left some students without transportation to school. RTS stepped in to fill the void but, in the process, was forced to reduced the frequency of some public bus routes.

The arrangement is temporary and will only be available to students through the fall, however. The bike and scooter sharing system will shut down for the winter months, which is also when HOPR’s contract with the city will come up for renewal.

“The bike and scooter-share system has to be accessible to everyone — that means stations located throughout the city, not just in the southeast or downtown and in wealthier areas,” said Mary Starapoli of Reconnect Rochester, a non-profit that advocates for transportation equity. “The service has to extend to the underserved populations for whom low-cost bike transportation is not just a novelty, but an economic opportunity.”

City Councilmember Mitch Gruber, who chairs the Parks and Public Works Committee, sees HOPR’s expansion in Rochester as one step in many to build transportation infrastructure. He pointed to the need for more support from local businesses and philanthropic organizations along with increasing the number of HOPR users.