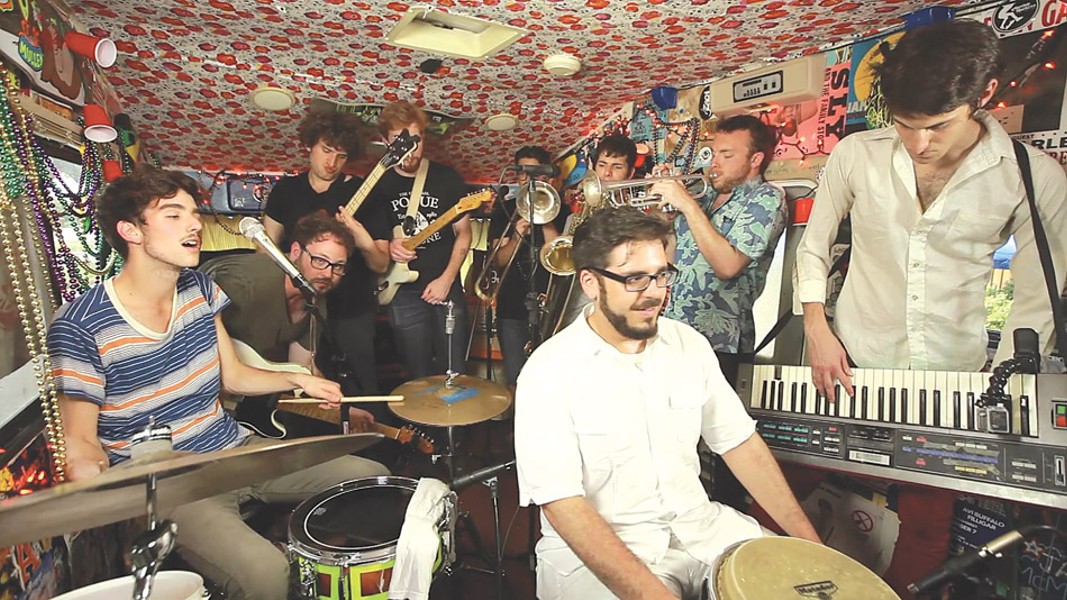 Though usually pegged as entertainers, musicians don't necessarily owe their audience a damn thing. This is particularly the case when said band is focused on exorcising its own demons, and is pursuing its muse.

Take for instance New York City's Emefe: The band dresses up its funk grooves with new wave-type electronica. And this isn't the band's exclusive slant, there are plenty of sub genres hiding in the wings, waiting for their cue. Strains like epic cinematic pop and afro beat are just a couple that come to mind. But not everyone is a fan of everything, so how does a band build loyalty with an ever-shifting sound and emphasis? Emefe drummer Miles Arntzen knows it ain't easy.

"It's not always well received," Arntzen says, "when a band explores its sound from album to album and doesn't stick with the same thing for every album. I understand that, but all my favorite artist were always evolving. So as our sound has evolved and changed ... to us, the DNA is still there. It's still us, and it'll always be that way. It's just the texture and the sound around the body of it changes."

Emefe came together in 2009 at New York University. Arntzen, a founding member, put it together to pursue a new love. "I put together the band because I had discovered afrobeat and wanted to play it," he says.

At the same time, he joined the New York based afrobeat orchestra, Antibalas.

"So I was simultaneously learning how to play the music and write the music," Arntzen says. "As Emefe grew, we developed a reputation for our live show and that's what's been at the center of our career as a band: our lively, no holds barred live show."

The band is fearless, following the music wherever it goes.

"Our sound has evolved a lot over the years. We've always encouraged ourselves to follow what our inspiration is. We just put out an EP called "Time," and the music is kind of a snapshot of where we were right when we were putting out our last record."

"Time" is electronic and poppy, but not the least bit ironic. This isn't a neon lampoon.

"There's more utilizing of drum machines," Arntzen says. "But not where we're just pressing play and putting everything on a loop; I'm actually performing with the drum machines live throughout the song and keeping the human element going. It's just a different texture and a different atmosphere."

Arntzen calls it funk-pop. "Our music is always revolving around the groove and around the interlocking rhythms of funk music and afrobeat music. At the same time, our music takes from pop arranging and new wave-style vocals on top of everything."

And Arntzen says Emefe relies heavily on genre-defining, genre-defying cats like Brian Wilson and David Bowie. Still, plugging in all these technical and musical components doesn't leave a lot of room to improvise. Emefe makes room.

"We create templates in our songs," Arntzen says. "And with those templates we sort of jump out live and create new versions from night to night. We'll always play music this way; just try to stay present and go where the music takes us."