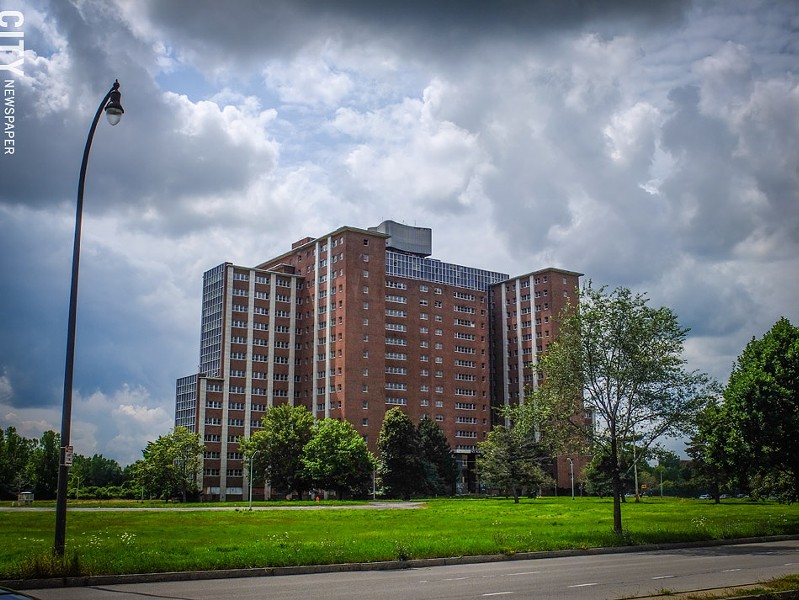 PHOTO BY KEVIN FULLER The Terrence Building on Elmwood Avenue, part of a former psychiatric center complex, has been vacant for nearly 20 years.

The Terrence Building, the 17-story, 1950's-era brick building that was part of the former Rochester Psychiatric Center, seems to jut up from the landscape at 1201 Elmwood Avenue. Over the years, there've been proposals for redeveloping its roughly 30-acre site – part of which is in the town of Brighton – but nothing has gotten built.

Residents in the nearby Highland Park neighborhoods have been concerned about the Terrence Building, because it's been sitting vacant for nearly 20 years. That may be about to change. Last month, the city Planning Commission approved a proposal by developers Robert Morgan and Ralph DiTucci that would transform this stretch of Elmwood Avenue.

The plan calls for demolishing the Terrence Building and creating a mixed-use development consisting of three commercial buildings, three apartment buildings, 11 duplexes, a four-story 110-room hotel, some small retail shops, and a walking trail. The height of the buildings will range from two stories to 12 stories.

City Council is expected to vote on the project at its August 15 meeting.

The project will add a considerable amount of new housing to the area – more than 500 rental units only minutes from the University of Rochester and Strong Memorial Hospital.

Though many residents in the area say they will be relieved to be rid of the psychiatric-center tower that loomed over the site, they're divided about the proposed development. Their biggest concern is traffic. Even though a second entrance would be added from Rochester's Science Parkway, the main entrance to the development would be at the intersection of Elmwood Avenue and Azalea Road, a small residential street that runs between Elmwood and Highland Avenue.

Some area residents wanted the traffic light at the Elmwood-Azalea intersection relocated, fearing that Azalea would become a cut-through street for residents and commercial vehicles. Some wanted the Elmwood Avenue entrance to the project at South Goodman Street, a main corridor in the area, rather than at Azalea.

But at the Planning Commission's meeting in July, the developers said the site was designed to create a new, pedestrian-friendly neighborhood that would connect to the existing Azalea Road neighborhood. Moving the traffic signal would create a barrier, they said.

Traffic wasn't the only concern. Store closings in nearby College Town raised questions about the viability of additional retail space in the area. But developers said they'll be looking for smaller, local retailers and service providers – hair salons, for example – rather than larger businesses.

Some residents also raised concerns about the height of some of the buildings, particularly the tallest, which, at 12 stories, is out of character with the area, they said.

Other residents spoke or wrote supporting the plan, however, and the Planning Commission approved it, 6-1. The next step, then, is City Council's vote on August 15. The Town of Brighton still has to approve the town's portion of the project; Brighton's building and planning department is reviewing the plans, but no public meetings have been scheduled yet.