When I told a friend that I was on my way to a restaurant called El Cuchifrito, his eyes lit up. It gave him nostalgia for his summer days growing up in The Bronx. Food trucks, colloquially called cuchifritos, would set up shop throughout the boroughs, serving up all types of fried foods (also referred to as cuchifritos): chicken, fish, pork, beef, empanadas, rice, beans, etc. There would also be a whole line of them just outside of the stations all along the elevated 7 Line in Queens, serving up fast comfort food for people wanting a quick but hearty bite to eat. The food brings life to summer. My friend was elated that I would be checking out El Cuchifrito. But since I am a bad friend, I did not take him along. I wanted all that food to myself.

El Cuchifrito Restaurant & Lounge is just off North Goodman Street on Norton, basically a straight shot from downtown. Owners Zaira Roldan, Evelyn Rodriguez, and Eladio Roldan opened the doors in June, but the restaurant already feels like a neighborhood staple that has been there for years.

The day I visited, it was bustling with a decent rotation of people coming in to sit and folks picking up take-away orders. Compared to the exterior, the interior is deceptively spacious; it felt like I'd entered a different dimension. The walls are decorated with vibrant murals that pay homage to the owners' Puerto Rican roots. Sitting in the bright and cheery dining area, I almost forgot that a rainy Rochester day was just outside. When I eventually exited the restaurant, I half expected to open the door to a sandy beach and an ocean view.

I should have brought my friend along, as there was plenty of food to go around. The aroma of the food hit me as soon as I entered the door, and I spotted a buffet that boasted huge serving dishes of rice, pork loins, and pollo guisado (chicken stewed in vegetables and bullion), all steaming hot.

To the right is a display case full of different flavored empanadillas. As I was so foolish as to have had a small sandwich at home before I went to El Cuchifrito (never eat before embarking on a culinary adventure!), I only had a small entrée of arroz con habichuelas (rice and beans) with the pollo guisado ($4.50), and a chicken empanadilla ($2).

The small portion was plenty, but I basically teased my body into yearning for more. The chicken absorbed the flavor of anything it touched, so I got a good taste of both my rice and the stew. I noticed that there was El Yucateco chili sauce on the table, and I thought that would be the best accent to my meal until co-owner Eladio Roldan suggested I also try their own house-made pineapple hot sauce. That made my meal perfect. The sweet-hot tang of their sauce, the hot-hot bite of the El Yucateco, and the bold taste of the already well-made food was what I needed. I was in food heaven. I look forward to coming back, as I'd only sampled the tip of the iceberg of what they have to offer. El Cuchifrito also boasts a full menu of sandwiches (including a Cubano, $6), lots of seafood items (such as crab, lobster, or conch empanadillas, $3 each), soups, appetizers, and small plates. 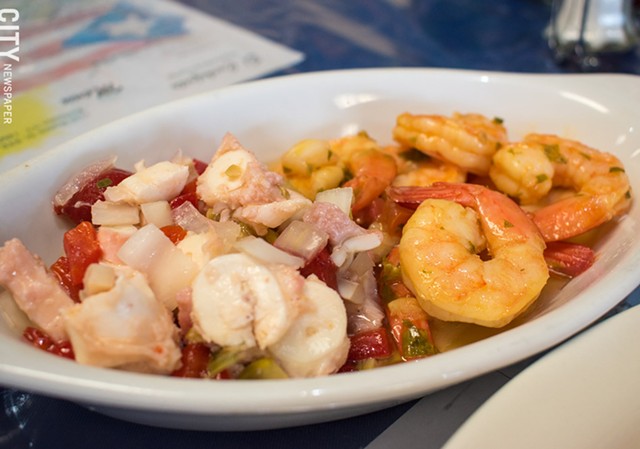 Eladio Roldan has been in the Rochester area for 20 years, and says he and his colleagues had always wanted to open a restaurant. They saved up their money for a few years, found the ideal location on Norton, and got to work renovating the space to accommodate their vision. After months of remodeling the kitchen and putting the art on the walls, they were finally ready to open for business, but they did not stop moving. The day I visited, all three were still working hard, with Zaira at the register directly in front of customers, and Eladio and Rodriguez toiling in the kitchen, cooking and subsequently wafting the scent of gastronomic delight throughout the dining area.

I felt a little bit guilty pulling any of them from their stations to talk. El Cuchifrito is up and off to a good start, and they already have short- and long-term plans for the space. The first thing Eladio intends to do is to extend the buffet bar so that it can accommodate more menu items for display and serving. They plan to build a bakery on the other side of the restaurant that will specialize in goods from Puerto Rico and Central America, which means even more confectionaries and other goods for patrons to enjoy and bring home. Farther into the future, they say they'd like to expand by building a second location in one of Rochester's suburbs. 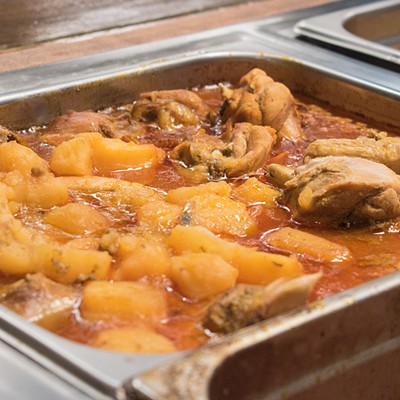