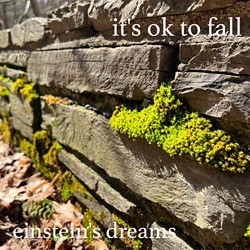 “It’s OK to Fall,” the new single from multi-instrumentalist Eric Heveron-Smith’s project Einstein’s Dreams, is a peculiar hybrid of concision and grandiosity.

“It’s OK to Fall” is an ambitious, self-contained indie pop song that uses several popular chamber-folk tells — Andrew Bird’s plucked-string sound and the breezy folk-pop aesthetic of the Scandinavian duo Kings of Convenience during the pre-chorus and chorus, and the easy, conversational vocal tone of José González throughout.

But Heveron-Smith has a mind of his own. “It’s OK to Fall” is a brisk listen. It seems to end just as the listener begins to settle into its tightly woven, if busy instrumentation that includes the whimsical use of a glockenspiel and hammered dulcimer. That kind of a tease is the sign of a cleverly crafted song: Keep ’em wanting more.

And while “It’s OK to Fall” has all the necessary brevity of a pop song, the dulcimer — played with both precision and sensitivity by Max ZT — is what gives the song the gravitas of traditional folk music without sacrificing Heveron-Smith’s quirky approach to songwriting.

The term multi-instrumentalist gets thrown around a lot these days, but Heveron-Smith earns it here. He plays both the trombone and tuba in addition to singing, strumming the guitar and ukulele, thumping the upright bass, and chiming in on the aforementioned glockenspiel.

Despite the full-band sound, drummer Dave Tedeschi, of Postmodern Jukebox, is the only other musician besides Heveron-Smith and Max ZT, who fronts the trio House of Waters. Heveron-Smith also recorded, mixed, and mastered the song.

Heveron-Smith — along with guitarist Wade McClung, keyboardist Sam Caldwell, and Matt Bevan-Perkins on drums — will play “It’s OK to Fall” and other original songs on Friday, Jan. 20, at Lovin’ Cup, 300 Park Point Drive. Doors open at 6:30 p.m. for the Einstein’s Dreams show, with the music starting at 7:30 p.m. $5.