Eel, eggplant, and octopus, oh my! 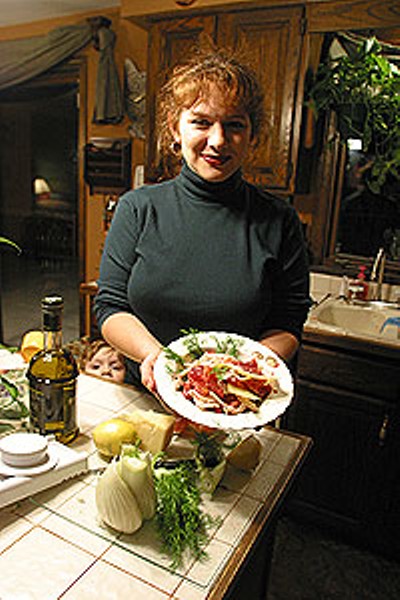 It's fascinating how an ethnic cuisine becomes part of the American fabric. It usually starts with a small place run by a native (think Ly Lou's Pearl of the Orient for Philippine food). If it catches on, others open, and an Americanized version of the food develops. With Chinese food, for example, it's now difficult to find anything other than the standard Chinese-American slop. Ditto for Italian and Greek.

To some extent, the same process has happened with Indian, Thai, and Japanese food. Indian has been reduced to tandoori chicken; Thai to pad thai; Japanese to California rolls. But sometimes --- after the cuisine is accepted by your average, pizza-ordering American --- smaller, more authentic places start popping up. Perhaps it's an effort to be distinctive in glutted markets, or maybe it's a more noble calling to educate. Examples? Think Thali of India (with its beyond-North-Indian menu), or Churi's Taste of Thai (with it's bolder, fish-saucy flavors). The Olive Tree has been doing this for Greek food for 25 years.

Now we have Shigeru Tanaka doing the same for Japanese food at Shiki, inhabiting the seemingly cursed Golden Pond location since February. Tanaka, who has worked as a chef both locally and in Japan, is a modest but confident man; you won't get him to say that his food is the most authentic in town. But my friend, Dr. Mike Bobrow, who has lived in Japan, says it unequivocally, and after four visits, I'm convinced.

Shiki won't disappoint those for whom Japanese means sushi, sashimi, and maki rolls. Tanaka's waitress says he is "very picky," and it shows in perfectly uniform pieces of fish that balance in every way: next to pieces of the same or other types, with the rice, and in your mouth. Tanaka explained that how you cut the fish alters both texture and flavor, then demonstrated the point with a rich piece of toro (fatty tuna). He cut two pieces of almost identical shape, and the incorrectly-cut piece was chewy, the correct one tender.

Here are the oversimplified basics: sushi, although used more generally, means the sweetened, pickled rice; sashimi is just the fish; chirashi-sushi is fish on the rice; and maki-sushi are rolls of seaweed and rice with something inside. Shiki serves a sushi lunch that includes six pieces of sushi, and six rolls (three tuna and three cucumber), for $9.75. All lunches come with miso soup and a shredded lettuce salad. The sashimi lunch has a gorgeous variety of raw fish for $12.75. I had the glorious sushi and sashimi combo (five sushi, nine sashimi, and tuna roll), and didn't blink at the $14.75 cost.

All sorts of sushi are available a la carte and in various combinations. The prices at Shiki are slightly higher than those at the competition, but the food has been of an amazingly consistent quality, which is worth paying for.

What distinguishes Shiki most, however, is the other foods it serves. The dinner menu lists a staggering 31 appetizers. You might have had shumai (Japanese dumplings) and tempura (battered, fried stuff), but how about nasu-den, broiled eggplant with sweet miso sauce ($4.50)? Tanaka deep-fries then broils thick slices of eggplant with the sauce, resulting in a butter-textured confection you eat with a spoon (you could use a straw). Another eggplant dish, nasu shigureni, is also a standout.

Klingons shouldn't miss e-dako, small, red octopi, heads and all ($4.75). On one visit, the belle of the ball was unagi yanagawa, eel and vegetables with egg, with the smoky eel contrasting fabulously with its surroundings ($7.75). Another distinctive seafood appetizer is amadai sakamushi, steamed tile fish with shitakes and scallions in a subtle broth ($7.75). The appetizers will keep you busy.

Sure, you can get teriyaki and tempura, but why bother? Tanaka says curry rice dishes are very popular in Japan (with beef/veg for $6.75, or fried pork for $8.50). You could also try grilled mackerel ($7.75) or broiled eel ($14). Don-buri dishes, which feature meats, vegetables, and egg over rice, are also popular. Dr. Mike loves don-buri, and gives Shiki's a solid eight out of 10. You can get katsu-don other places (fried pork and egg), but not negi toro don (chopped fatty tuna, $12) or una-don (broiled eel, $9).

The building is drab from the outside, but the remodeled interior is bright, intimate, and inviting. Tananka is the only cook, and he has just one waitress, so Shiki isn't fast, but neither is it slow. The quality is worth it, and the service lovely. No, it has no knife-throwing sideshow to distract kids, but Shiki sets a new standard for Japanese food in Rochester.

The South Wedge continues to be a hotbed for restaurants, with the former Lorraine's location now Flavors of Asia. Amy Cheng cooked for her brother Wayne Luong at Golden Port, and just opened her own place. The wide-ranging menu will soon have even more Thai dishes. Open seven days a week. Call 256-2310 for information.

Michael Warren Thomas can be heard on WYSL 1040 AM. Tune in on Saturdays for gardening, restaurants, and travel from 9 to noon, and on Sundays for Toronto restaurants and wine from 10 to noon. Listen live on the web at www.SavorLife.com.