Eats with the Hatter 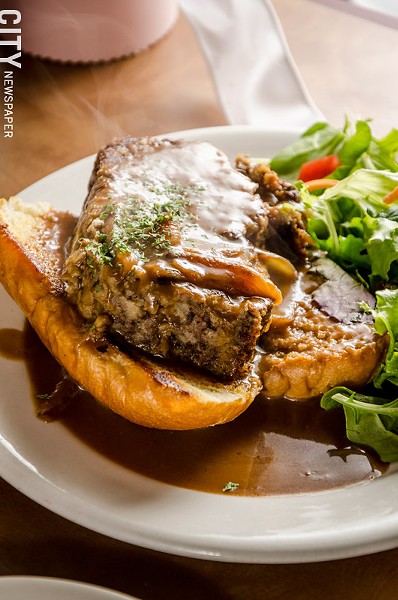 PHOTO BY MARK CHAMBERLIN The open-faced meatloaf sandwich, which has a rice-based filler and is studded with fresh mozzarella and beef, with caramelized onion gravy with parsley on top.

Quaint is probably the first word that comes to mind when trying to describe The Mad Hatter Tea Room. A relatively small house converted into a restaurant, there is plenty of charm, with old hardwood floors and friendly service that does well even in the cramped quarters. And that doesn't just mean the dining area; the kitchen at The Mad Hatter is among the smallest I've seen in a functioning restaurant. Sure, we had a food arrival delay on an unexpectedly busy day, but what impressed me was how much of the food was made in house.

The menu covers the well-trodden ground of a standard breakfast and lunch establishment with most of the dishes taken to a level above the typical diner. One of these was the open faced meatloaf sandwich ($9.75) which was a strong comfort food lunch offering. The smothered meatloaf had a rice-based filler and was studded with fresh mozzarella. The flavorful beef and caramelized onion gravy with plenty of parsley on top really stood out, and the texture of the loaf itself was aided by a hard sear. It wasn't mind blowing but the dish was executed well overall.

The Duchess ($8) benedict, featuring a banger, is one of the seven versions of eggs benedict on the menu and another well executed dish. Hollandaise sauce is the most often messed up part of an eggs benedict and this one was damn close to being perfect. The sauce was nicely emulsified and savory with herbs (parsley I think) but could have used some lemon for brightness. The banger sausage, in this case an emulsified, lightly smoky link, was a positive substitution from the basic Canadian bacon in texture and flavor. In lieu of a large flat top the potatoes were oven roasted to a nice crisp which was a substitution of necessity, but not one that was unwelcomed.

The Challah French toast ($6) was under-soaked with the vanilla scented custard, but its eggy bread still offered a good, dense texture. I think Challah is one of the better breads for French toast, and thankfully Mad Hatter offered an option for local maple syrup ($1.75) from Cummings Maple Farm in Palmyra. The restaurant served the syrup in a small glass bottle and my wife and I were able to take the leftover deliciousness home, which was a nice touch.

A couple of the menu items that we had during our lunch didn't work as well, though. The Cobb Salad ($8) was nicely split into separate portions for us, but the overall package just didn't pop with flavor. I did appreciate that the ranch dressing was made in house although it would have been better served being more assertively seasoned and the avocado pureed into it to make a smooth dressing. Other than the fantastically crispy bacon, everything was a bit washed out. The Rabbit's Veggies Pannini ($8) was less a burger than a loose formation of rice, black beans, and red peppers. The flavors were fine, but I think it could go further if it were formulated more as a grilled cheese with the cheese used as kind of a binder.

Of course, tea is a huge part of what The Mad Hatter Tea Room is all about. It has quite a large selection of teas from Divinitea out of Schenectady. The tea is served loose leaf ($2.35) and is brewed at the table in a fine mesh infuser which leads to a very clean cup. Refills of hot water are available so you can brew a second or third pot to see how the flavors change in each extraction. Of the three different blends we tried, the hibiscus peppermint white was my favorite. The vibrantly colored hibiscus adds a fruity sour bite that works well with the peppermint forward blend and was refreshing. A black cherry blend had strong aromatics that didn't overpower the taste, and the white vanilla chai was a light mix but all the warm flavors you'd expect were there. I was impressed by the balance in all three tea blends.

An option that we didn't get a chance to try was Mad Hatter's High Tea offered Tuesday through Saturday at 3:30 p.m. It is reservation only and features tea service on fine china and food offerings that include scones, clotted cream, finger sandwiches, and some other small eats. This would be a nice relaxing time out for a group with a touch of that British charm.

And that stands for the restaurant as whole as well. It offers catering and parties and specifically mention bridal or baby showers and birthday tea parties as options. I would definitely recommend it for events like that or if you just want a simple homemade meal out. On your way out, you should grab some of the restaurant's house baked goods as well. My wife and I really enjoyed the thin toffee crunchy cookie and the palmier. Both were not as sweet as many desserts and had great textural crunch. A full baked goods case is there to satisfy your sweet tooth during your meal or take some on a road trip like we did.