Eastman School's China tour to go on despite student ban 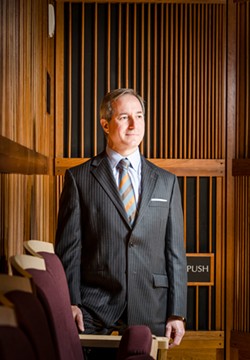 The Eastman School of Music plans to go ahead with an upcoming scheduled eight-city orchestral tour of China, despite that country’s denial of visas to three members of the orchestra who are South Korean nationals.

Eastman Dean Jamal Rossi explained in a letter to faculty that the situation posed “a tremendous ethical dilemma,” but that leaving the students behind was preferable to the alternative option of canceling the tour altogether.

“Cancelling would likely have a negative impact on Eastman’s reputation within China, and potentially limit other opportunities to recruit, perform, and tour for our faculty and other ensembles,” he wrote.

The school was notified in late September by tour affiliates in China that the three students had effectively been banned. Rossi explained in his letter that China blocked the students in retaliation to the United States deploying a missile defense in South Korea in 2016.

Rossi wrote that attempts to secure visas for the students with the help of local congressional delegates and the Chinese Consulate in New York City were unsuccessful.

His correspondence added that he and other school officials met with the affected students prior to making the decision to remove them from the orchestra, the Eastman Philharmonia.

In a subsequent letter to students, Rossi wrote that Philharmonia members were in favor of continuing the tour by a margin of two to one, and that the affected South Korean students said the show should go on.

“As I wrote to the students, I can understand and appreciate that some of you may agree with my decision while others may not,” Rossi wrote to faculty, adding that he would speak personally with anyone who wanted to question his decision.

“In the meantime, I hope that you can appreciate the challenge this scenario created in that the final choices were between two potentially negative outcomes,” his letter read. “I believe this decision is ultimately in Eastman’s best interest, and I truly appreciate your support of the students and of this important international initiative.”

The tour is slated to run from December 30 through January 8, visiting cities including Shanghai, Hangzhou, and Shenyang.