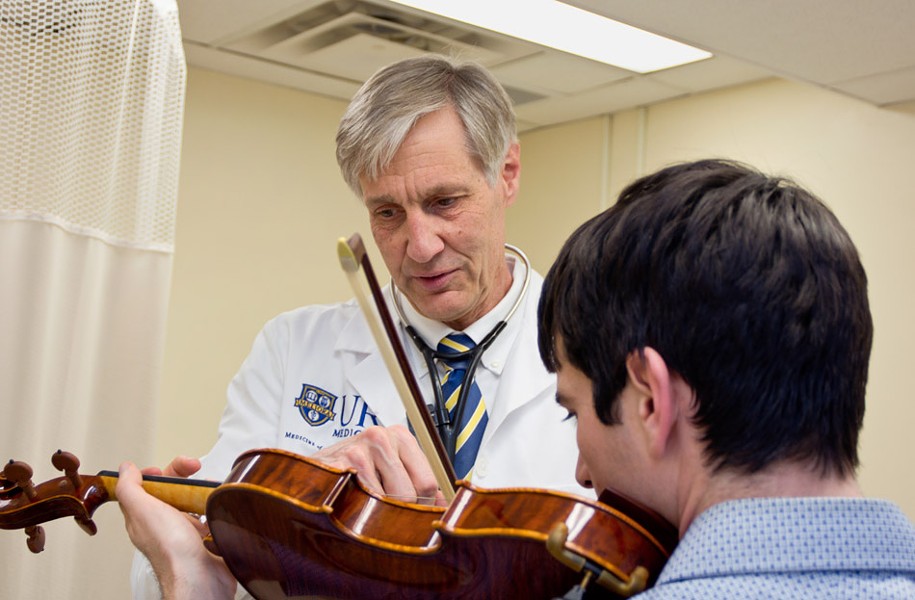 An urgent care center or emergency room is usually the first destination in the case of a broken arm or other physical injury sustained on a job or in the course of playing sports.

But where can musicians and other performing artists go to receive medical care specific to their vocations? Strained vocal chords. Tendonitis. Carpal tunnel. Why not emergency medical care for those things?

These were the questions that doctors at the University of Rochester Medical Center and professionals at Eastman School of Music had about five years ago, when the program that would become Eastman Performing Arts Medicine was first conceived.

Now approximately one year since its official launch, the program is setting its sights to expand clinical care options for performing artists and further develop educational and research efforts connecting medicine and the arts. Eastman Performing Arts Medicine now offers a 24-hour call center that artists can call to receive treatment within 48 hours.

Performing arts medicine is a relatively new specialty, having emerged in the 1990s. The inspiration for the Eastman Performing Arts Medicine program — and its four-pillar model of wellness, therapy in clinical care, education, and outreach — came directly from Houston Methodist Hospital’s Center for Performing Arts Medicine, a pioneer in the field and whose director, Todd Frazier, is an Eastman alumnus.

The Houston Methodist program is one of the leading performing arts medicine centers in the country, but is not formally tied to any music school. And although the Houston metro area’s population is nearly seven times greater than that of Rochester, it was Frazier who, as a member of Eastman’s leadership council, insisted to Eastman Dean Jamal Rossi that a similar program would work in Rochester — in part due to the infrastructure of the Eastman School and its network of student and community musicians.

“What is it that’s going to make it Rochester’s and make it unique?” Gaelen McCormick, the program manager at Eastman Performing Arts Medicine, asks. “And part of that is having the Eastman School.” 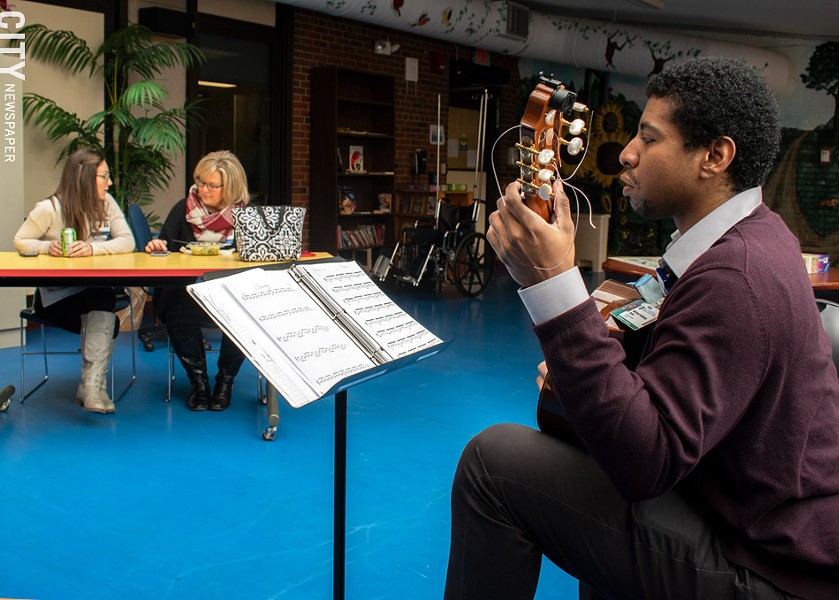 The other significant component is the University of Rochester’s celebrated medical community. The university was recently ranked 36th among the best medical schools for research and 23rd for primary care by U.S. News & World Report.

About five years ago, a leadership team advised by Frazier began to formulate the Rochester program. At its outset, Eastman Performing Arts Medicine also benefited from a group of experienced medical doctors and specialists who had already set up clinical care programs at URMC in their respective fields.

For instance, Dr. Ralph Manchester, the director of University Health Service at U of R and president of the Performing Arts Medicine Association, a trade organization, has been researching performing arts medicine and working with Eastman musicians for over 30 years. He currently works with music therapists doing clinical visits in the hospital and helps to direct performing artists to the right specialists.

Several of the doctors in leadership roles at Eastman Performing Arts Medicine are trained musicians or otherwise have a background in performing arts.

Dr. John Ingle, the head of the URMC Voice Center, is a laryngologist who sang in choirs from grade school through college before pursuing a two-year fellowship in laryngology at University of Pittsburgh. He’s worked with opera singers and musical theatre artists as well as hardcore and metal singers to treat medical conditions related to the voice.

Ingle says medical problems frequently stem from other factors beyond vocal fatigue. “I think the old model was to blame and shame singers for overusing their voice, but that’s not always the case,” he says. “Oftentimes, there are medical conditions that need to be addressed.”

A lack of awareness surrounding seemingly unrelated medical conditions can adversely affect vocal health, Ingle says. “Allergies and reflux can be kind of those ambiguous things where people say, ‘Oh, I’ve always had a stuffy nose’ or ‘I’ve always had a little bit of a scratchy throat’ or ‘I’ve always taken a little bit longer to warm up,’ and they’ve never really had a throat health assessment to know that those are problems,” Ingle says.

In order for singers to maintain fitness and perform at a high level, Ingle points to what he calls “vocal hygiene,” including nutrition, drinking sufficient water, and getting proper sleep. This level of vigilance with regard to a musician’s own physical health is similar to that of an elite athlete.

“The whole idea is that the folks that we’re working with are vocal athletes,” Ingle says, “and that we’re trying to maintain and preserve function, promote health, and have longevity. And I think there are certain sports where it’s expected that you won’t have longevity: You’re done at age 40, or you’re done at age 50. And we have a different perspective with voice care, because we want people to continue to practice their art into their latter decades.” 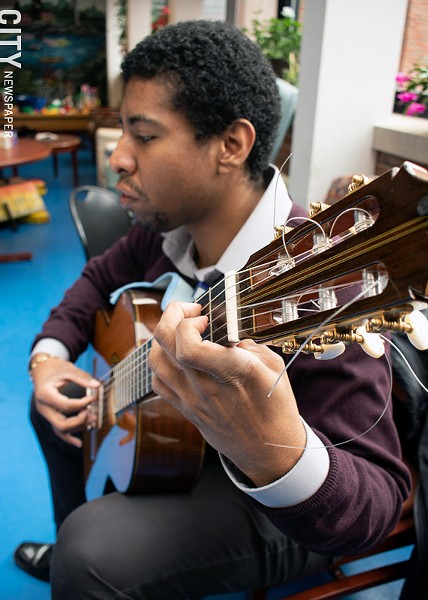 Dr. Mark Mirabelli, who specializes in orthopaedics and physical performance at URMC, has worked in the field of sports medicine since 2005. He’s treated pro football and basketball players during his fellowship at the Cleveland Clinic, and continues to work with athletes as well as dancers and others in the performing arts.

“Everybody kind of recognizes that athletes have these kinds of issues,” Mirabelli says. “But in many ways, the difference is that performing artists, and musicians particularly, have different problems beyond the stuff you typically see.”

Mirabelli says that overuse is a prevalent issue for performing artists he encounters as patients. “That could be vocal strain in singers, it could be tendonitis of the wrist in a drummer, it could be stress fractures in a dancer, in the shins,” he says. “But kind of the common theme is that they love what they do. Sometimes they do it so much that it breaks them.”

Ultimately, the goal of Eastman Performing Arts Medicine is community engagement. And while the program has in effect had its “soft opening,” driven mostly by individual patients’ interest in getting care, there has not yet been a concerted outreach campaign or fundraising effort. Looking forward, Mirabelli hopes that local choirs, dance troupes, and theater companies will look to Eastman Performing Arts Medicine as an available resource.

“This is sort of just a different way to advertise our clinical practices. So, we’re already in the office, right, we don’t need to open up a different door or building to see these folks,” Mirabelli says. “We just need to make sure that they know how to come get to us, and we’re working on growing it that way.”