Eastman Opera Theatre’s fall productions have typically been a refuge for 20th and 21st-century operas with a more intimate dramatic scope, a more challenging musical language, and less frequent performances than the canonic works of a Mozart or a Puccini.

The Shakespeare-inspired story details the ironic cognitive descent of Dr. Norah Lear — an expert on degenerative brain disease — as she struggles to maintain autonomy despite her Alzheimer’s diagnosis and her three daughters quarrel over who will provide her care and manage her affairs.

Davis approaches opera as theater, and takes a kaleidoscopic approach to musical genres in “Lear.” “I approach opera as a dance with music that propels the story, that implies movement and physicality,” he said in the composer’s note.

The sheer variety of musical styles that Davis references is impressive: boogie-woogie, jazz, reggae, and even avant-garde vocalizations improvised by the singer — a rarity in any opera performance, let alone one in an academic setting.

Throughout the opera, tonal instability and terse vocal phrasing make for a tumultuous score, regardless of the particular genre being referenced at the moment. As is the case with all EOT productions, the opera was double-cast, and as is typical, the ensemble of singers was uniformly strong. 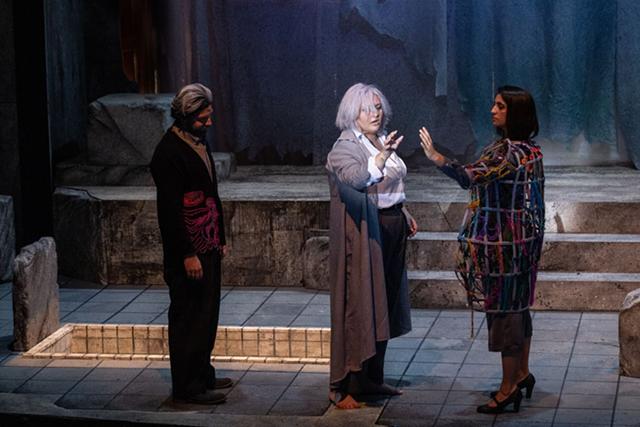 It was fitting, though, that the strongest performances of the night came from the characters who most occupied Lear’s attention and directed her internal reality — not the external one for which her daughters were vying.

Perhaps the most poignant line of the entire opera was sung by Sheppard, when his Mortimer declares that Lear’s daughters are “fighting for the wealth that can’t be carved up.”

Eastman Opera Theatre’s Music Director Timothy Long securely led the nine-piece chamber orchestra from behind the set, rather than in the pit, as the singers on stage told what will be Steven Daigle’s final production as artistic director.

In a presentation dominated by emotional despair and isolation, Nicole LaClair’s enigmatic costume design also stood out. With the exception of Lear, each of the characters’ otherwise conventional attire featured whimsical colored yarn patterns knit into the fabric of their clothes. In the case of Mortimer, the effect was almost psychedelic.

Elsewhere, the yarn ornamentation served as a subtle accent to purposefully pedestrian attire. The costume for Nora’s Mind was most notable — a coat made out of latticed yarn of various colors. What the yarn signifies is unclear, but this surprising visual element lent additional depth to the already compelling storytelling.

Eastman Opera Theatre repeats its performance of “Lear on the 2nd Floor” on Friday, Nov. 4 and Saturday, Nov. 5 at 7:30 p.m., as well as on Sunday, Nov. 6 at 2 p.m. For more information and tickets, go to esm.rochester.edu.