In the summer of 2013, migrant farmworkers on a berry farm in Skagit County, Washington, about an hour north of Seattle, began to organize against poor working and housing conditions and for better wages. The labor group they created, Familias Unidas por la Justicia (FUJ), is an independent union, led by indigenous Mixtec and Triqui immigrants from Mexico, and now represents more than 500 Mixteco, Triqui, and Spanish-speaking farmworkers at Sakuma Brothers Farms.

For three years, FUJ organized effective strikes and walkouts. The group, along with berry farm workers in Mexico's San Quintin Valley, received widespread notice in 2016 for coordinating a boycott of Driscoll's, the world's largest berry distributor and a major buyer of product from Sakuma Brothers Farms. And in September 2016, the farm's workers voted to officially have FUJ represent them as a union in negotiations — making FUJ the first new farmworker union in the US in 25 years, journalist David Bacon reported.

In less than a year, FUJ negotiated a contract with Sakuma Brothers guaranteeing a $15 hourly wage (Washington's minimum is $11), establishing a grievance procedure, and ensuring "just cause" protections.

The UR event takes place 6:30 p.m. to 8 p.m. in the Schlegel Hall Rotunda on the River Campus. For more information contact the Worker Justice Center: wjcny.org; 325-3050.

Participants in the roundtable will be FUJ President Ramon Torres; C2C organizer Edgar Franks; Alianza Agricola leaders; Carly Fox, Worker Justice Center senior worker-rights advocate; and Molly McNulty, UR adjunct lecturer in health law. Organizers say the discussion will focus on migrant farmworker rights and their impact on the "national, regional, and local landscape," with an emphasis on farmworker access to health care and driver's licenses. 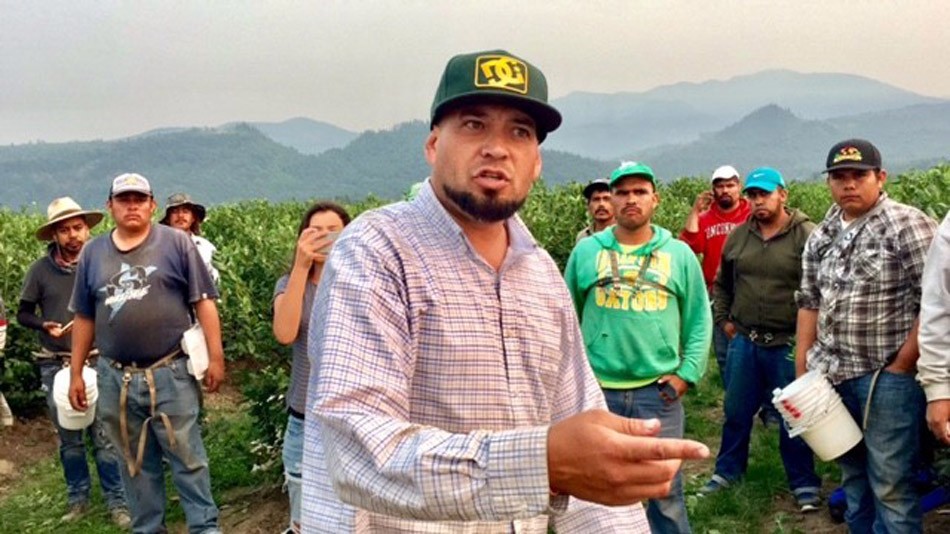 Speaking tour organizers wanted to bring together local and Washington workers to talk about organizing strategies, Fox says, and a training session is planned with members of Alianza Agricola. They will specifically be focusing on Green Light NY, a campaign to expand driver's license access, but "we really wanted to do more community building and bring immigrant workers together to fight for collective power here," Fox says, "whether it's for their rights as immigrants or their rights as workers. Hopefully, some of the campaign lessons and strategies that folks in Washington have been using can be an inspiration to them here."

FUJ, the Worker Justice Center of New York, and the Workers' Center of Central New York are all members of the Food Chain Workers Alliance, and it was during an annual meeting a couple of years ago that the East and West Coast activists connected. There are a lot of parallels in organizing in Washington and New York, Fox says. Both states are border states where there's an increased vulnerability to immigration enforcement — which has also pushed farmers to shift their workforce from hiring undocumented local workers to using more guest workers, creating new challenges to organizing.

The US agricultural system has come to rely heavily on undocumented farm laborers, many of whom become fixed parts of their communities. But with a broken immigration system and a White House administration that has taken a hardline approach, nationally more farmers are turning to the H-2A guest-worker program. Farmers have also said they've had trouble finding enough workers.

The H-2A program allows agricultural employers to hire workers from other countries for jobs that last 10 months or less, and the employers must provide fair wages and housing. But farmworker advocates say the structure is inherently flawed, leaving workers vulnerable to abuse and unable to leave jobs, and it displaces workers who have been here for years.

"We're seeing that shift in labor and agriculture," says C2C's Edgar Franks, who will take part in the UR roundtable discussion. "So I think that's one of the big things we want to bring out into the conversation — about the uses of the H-2A program and how it hurts workers that are being brought in from Mexico and the local workers, and how that's going to affect our food system."

Right now, power is with the Farm Bureau and lobbyists, and those forces dominate discussions around labor and farmworkers. You hardly ever hear anything directly from farm workers, Franks says. It takes community organizing to create a shift in those dynamics.

"I think this is a unique opportunity, this speaking tour, to actually hear from farmworkers themselves about what it is to be a worker in the United States and an immigrant, and unionizing and winning," Franks says.

One of the Upstate workers taking part in the events with FUJ is Victor, a dairy industry worker for the last 15 years and a member of Alianza Agricola. The objective for Alianza, he said through a translator, is to expand driver's license access — without one, it's a challenge just to get out and do basic shopping — and to fight for immigrants' rights, like appropriate housing.

"We hope that people will raise their voices," he said, "and speak out on behalf of this issue and let politicians know, because everything that we produce as agricultural workers, all of that arrives on everyone's table."