East students find that friendship is round 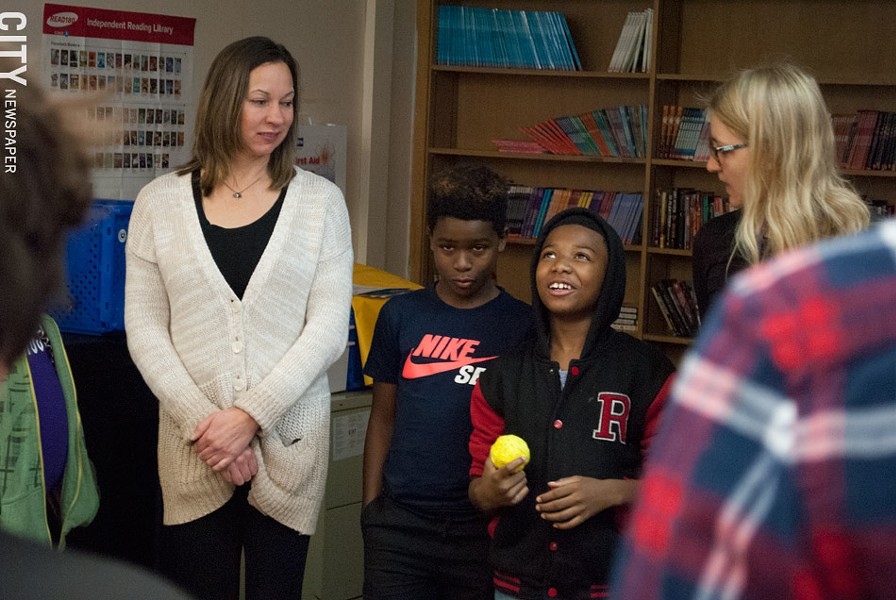 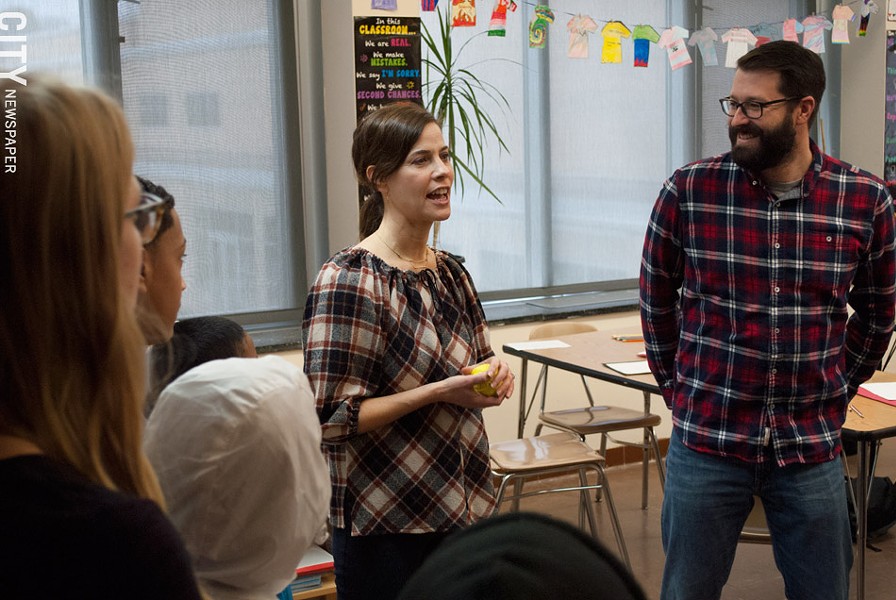 It's just before 8 a.m. at East Lower School, and the hallways of the sprawling school are fairly quiet. East Lower is the junior high school the University of Rochester created at the former East High in 2015. About a dozen students in teacher Amanda Donovan's sixth-grade class begin their day with a peace circle, a staple of an educational approach called "restorative practices."

With little prompting, the students form their circle. School social worker Michelle Garcia asks them to say how they're feeling that morning, using just two words, and she hands a bright yellow ball of yarn to the first student. As each student takes the ball and passes it on, the responses vary: "anxious and excited," "happy and nervous," "hungry and tired." A couple of students shuffle their feet shyly and say nothing, then quickly pass the ball on. Others can't wait for their turn to speak.

East Upper and Lower Schools are just two of many in the Rochester school district that have turned to restorative practices as a way to encourage children to talk about their emotions and problems in positive ways rather than letting them cope with them on their own. Educators are finding not only that restorative practices reduces behaviors like fighting, but also that it's a better alternative than a zero-tolerance policy when students misbehave.

Research confirms that the harsher approach that swelled during the 1990's resulted in soaring rates of suspensions and students dropping out of school, says Valerie Marsh, assistant director of the University of Rochester's Center for Urban Education Success.

Restorative practice draws on several disciplines – sociology, psychology, criminal justice, and education – with the aim of helping children and adults build relationships. In some ways, the practice resembles group therapy. The peace circles give people a safe way to speak and listen to each other, which can build empathy and compassion. Educators are using it to help students resolve disputes peacefully and reduce violence, which is frequently cited as the main driver of suspensions.

But many teachers and administrators, including some in Rochester, weren't exactly in a rush to embrace restorative practices. The concept is often couched in jargon like "organizational culture change," and it conflicts with some teachers' views of how students should behave in school.

"Punitive discipline is the way we do things," Marsh says. "It's been institutionalized. But you have to pay attention to whether or not this has been effective."

Marsh has been studying restorative practices and how it's been used at East Lower, East Upper, and World of Inquiry in Rochester and at New York City's Leadership and Public Service High School.

"Start with, 'What are the goals?'" Marsh says. "If the goal is to remove the problem in the short term, then the student winds up going to detention or getting suspended. The problem has been removed."

But if the goal is to give every child a quality education, the problem has been made exponentially worse, she says.

"Those children that get suspended typically get suspended often," she says. "It's not a one-off. It's mostly minority students, so now you have a discipline gap, between black and Latino students and white students."

Marsh looked at whether using restorative practices reduced suspensions. While the results were favorable at all of the schools, the changes at East have been the most dramatic.

"Disciplinary referrals and suspensions have dropped precipitously at East," she says. Suspensions at East Upper dropped from 2,591 the year before the UR began to manage the school to 221 in its second year.

Marsh says school administrators and teachers need to consider several things when moving to restorative practices. For instance, the whole school needs to buy in to the concept; it's not something that can be just handed off to teachers. The entire school staff needs training in restorative practices and in preparing for the changes the school will undergo. For instance, the practices can seem intrusive at first, taking time away from instruction. And more social workers may be needed.

"There was a little chaos in the beginning," says Joanne Larson, a professor at the UR's Warner School of Education and associate director of research at the Center for Urban Education Success. "We did intensive training with teachers, but the school security officers, cafeteria servers, and janitors had a little training, but not enough. We had people saying, 'OK, what am I supposed to do?' And the kids thought, 'You can't suspend me? Wow; if you thought that was bad, watch this....'"

Improvements are slow in coming at first, says Larson. And there will always be people, including teachers, who believe that restorative practices are too soft and that no one is held accountable.

"There is a culture that says all these kids need is a good whuppin'," Larson says. "But it's been proven through 50 years of research that it doesn't work."

Many Rochester school district children experience trauma in multiple forms, says Larson: hunger, neighborhood violence, the loss of a sibling or parent. When a student is having a bad day or misbehaving, it's hard for teachers to stop what they're doing and give that child individual attention, especially when several students need help that day.

Larson recalled an incident between a teacher and a student who came to class and seemed uninterested in doing any work. The teacher became frustrated and sent the student to the counselor's office. After talking with the student, the counselor learned that the student had had a terrible experience that morning.

"Of course, the teacher was mortified," Larson says. "But that taught us that the question isn't, 'What's wrong with you?' It's 'What happened to you?'"

Sometimes talking about what happened requires the teacher to take some responsibility for it, says Marsh.

"And that's uncomfortable," she says. "That's why I argue that restorative practices require a higher level of accountability from everyone involved."

Critics sometimes refer to restorative practices as the "hug it out" method of conflict resolution, and they question whether it can help improve test scores and graduation rates.

But Larson says the restorative practices movement is disrupting the cradle-to-prison pipeline by keeping students in school. Before the UR became involved with East High, a student could be suspended for something minor like getting to school late, she says.

"Now there's a different response," she says. "Maybe something happened at home last night or on the way to school. We want to hear, because we want you to be here."