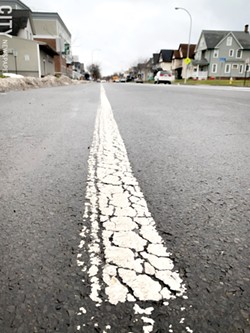 The improvements, for which the local cycling community had advocated for years, would include narrowing the roadway to 33 feet from 50 feet between North Goodman Street and Culver Road, adding new sidewalks, installing new lighting, planting new trees, and making other streetscape beautifications.

One-way cycle tracks, which are essentially protected bike lanes that are separated from the street, would run along both sides of the road.

“It’s definitely going to be a big improvement over what’s out there,” said Brendan Ryan, a board member of Reconnect Rochester, a mass transit advocacy group.

Council is expected to consider approving the project at its July 21 meeting.

The change in pavement width requires Council’s approval, according to legislation submitted by Mayor Lovely Warren. There will be a public hearing on those changes at a later date, likely in the fall, said city spokesperson Justin Roj.

The project has been under development for around two years, and members of Reconnect Rochester as well as several other advocacy groups and some Beechwood neighborhood leaders offered early, enthusiastic support for the cycle tracks.

They were taken by surprise in January, however, when city officials suddenly unveiled a change in design that narrowed the paths and sidewalks along the block between Palmer and Mustard streets and added on-street parking.

The change was made in response to business owners who wanted more on-street parking, Department of Environmental Services Commissioner Norman Jones said at the time.

The final design submitted to Council abandons those tweaks, so the cycle tracks will remain five feet wide throughout the corridor.

Ryan said he was glad to see the change and is satisfied with a width of five feet, which is the minimum width for a cycle track under widely-accepted street design standards.

The design does include on-street parking on the south side of East Main between Federal and Quincy streets. The rest of the corridor will have a center turn lane.

Jesse Peers, Reconnect Rochester’s cycling coordinator, called the project “transformative” and said it will add “absolutely stellar” bike infrastructure to the corridor. There are eager families looking forward to changes, he added.

“We would love to see all of Main Street look like that,” Peers said.

Jeremy Moule is CITY's news editor.  He can be reached at jmoule@rochester-citynews.com.