I woke up last Monday with a headache that started from the base of my collarbone and snaked up my neck to nestle its head right behind my left eye. Turning my head right made the serpent constrict even more and was a painful jolt throughout the day. I felt like I was in store for an extraordinarily bad week. But just as I was about to hide from civilization, I was invited to the Wednesday night preview event for the new fall menu at Veneto Wood Fired Pizza & Pasta. Owners Donald and Julie Swartz hosted an intimate 18-person dinner featuring a five-course meal paired with selections from their vast wine menu. I'm no doctor, but I felt this was precisely what would ease my pain.

Veneto is a staple of the East End, and despite the high turnaround of neighboring businesses, it's been around for about 18 years, and it claims to be the original wood fired pizzeria in town. It's a cozy place that has plenty of seating next to the window wall facing East Avenue, great for enjoying a meal and people-watching on a balmy evening.

The entire dining area resembles a library or a parlor in the type of dwelling that's large enough to house at least three generations of a family under one roof. Behind the bar that also serves as a divider between the dining area and the open kitchen, a brick oven roars in the corner with stacks of cut wood piled neatly against it. Veneto is a family restaurant that feels like someone's home. I've been going there since I first came into town, mostly because it is a great "first date" restaurant — I've had precious few second dates there, but that's mostly on me, not Veneto. 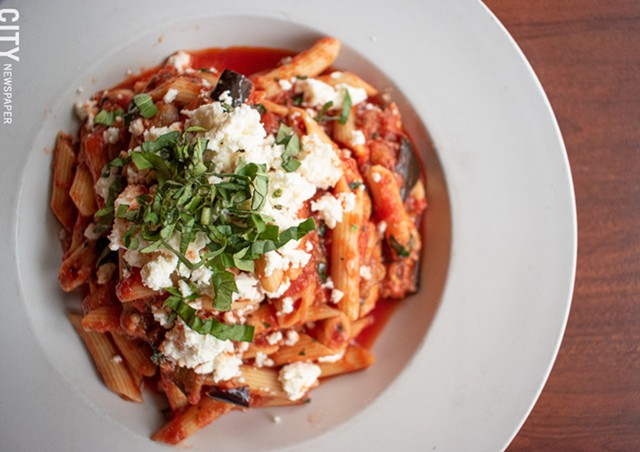 I arrived to the preview event a bit early because I was a little slower-going due to the neck pain. Donald greeted me with a smile and handshake, and as I was sitting down, Julie had one of the servers hand me a glass of their house white, L'Orso, made by Fairport's Casa Larga. I'm usually a dry red person, but I enjoyed this blend that hints of a Pinot Grigio and was mild enough for a wine named for bears. I finished my glass while chatting with the Swartzes, and the rest of the guests — all local dining writers and bloggers — filed in and took their seats at our table.

Our first course was the Utica Greens ($11, add sausage for $2), a take on the Italian classic, topped with toasted bread crumbs. Cherry peppers and banana peppers are braised with the escarole in Vento's version, giving it a hint-of-spicy aftertaste, but nothing too overpowering. Next up was a roasted beet salad ($13), which includes a mix of arugula, beets, and a light mustard vinaigrette, topped with goat cheese and pistachios — I could have eaten a whole bowl of this salad myself — paired with another glass of L'Orso. The combination of the salad and the wine and conversing with other guests did wonders to help me forget about my excruciating neck pain.

What helped even more was the cheddar, bacon, and broccoli pizza ($15). This is a garlic-and-oil based pizza topped with a cheddar and mozzarella cheese blend, and thanks to its time in the wood fire oven, it was the perfect combination of crispy exterior giving way to a warm, soft interior. The pizza was paired with a dry red blend called Vignamaggio Il Morino that tastes like roasted almonds and raspberries, but is still as dry as a red can be. With three of five courses down, I was wondering how they would top what they'd already presented. 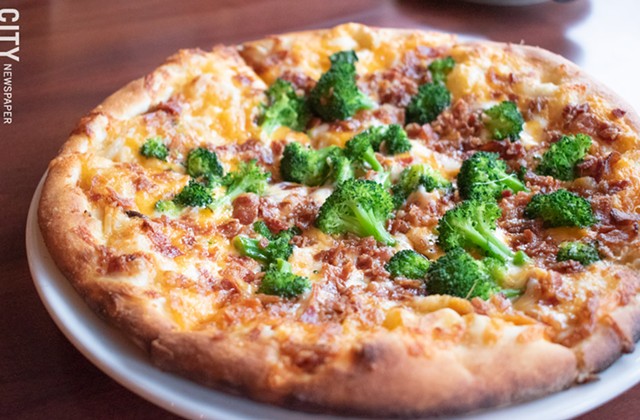 A brief palate cleanser came in the form of house-made lemon gelato, which had such a subtle flavor, I initially thought it was vanilla. The citrusy taste doesn't hit you as much as it softly dances on your tongue. I may be odd, but I prefer this to an overabundance of sugary, artificial fruit flavor.

Our fourth course was Penne alla Norma: pasta tossed with a pomodoro sauce and fried eggplant ($17). I was hooked from the first whiff of fresh basil and other herbs, and the explosion of flavor packed in each bite made me want to be a little bit more selfish at our sharing table. The Swartzes paired the penne dish with their house red, Il Toro, an oak-aged dry red also made by Casa Larga.

Last was the Chicken Orro Bianco ($19), which featured large medallions of grilled chicken, sliced sausage, and roasted wild mushrooms atop a bed of fettuccine in a butter parmesan sauce. This dish tasted like autumn. The creamy sauce gave the feeling of being buried under a heavy wool blanket in front of a fireplace, and the mushrooms gave it an earthy hint. I could almost smell a forest full of freshly fallen leaves. A lot of the guests liked this dish the most, but with a name like "White Gold Chicken," I am not surprised. The dish was paired with Fossacolle from Brunello di Montalcino. I would usually pair a white wine with a chicken dish, but this red was soft and almost creamy, and complemented the sauce superbly.

Chefs Chris Mayer and Dan Haines created a culinary fall tapestry with their autumn menu, and I left Veneto with a full belly and warm feeling on the first truly cold day of the season. Did the evening of cuisine and conversation cure me of my headache? Nah, I took two ibuprofens and slept it off. But it definitely took my mind off of it. 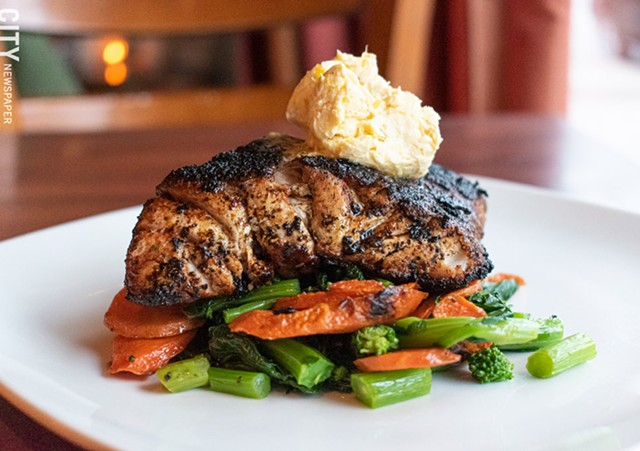