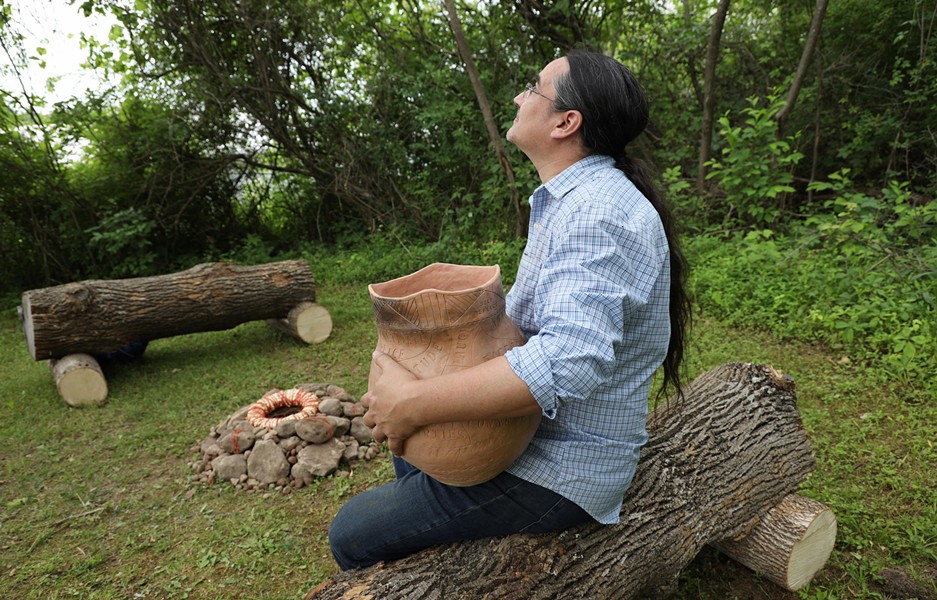 Seneca and Onondaga artist Mike Jones walks to a peaceful spot beneath the majestic canopy of a massive, old apple tree. In the center of the clearing is a tree stump, and on it sits a clay pot nestled in a straw bed.

"It's a giant Iroquois pot, and I made it look like the pieces were put back together,” Jones says. “Each piece is something you can do to heal trauma, so forgive, self-reflect, dance, create, keep a good mind, meditate, those types of things."


Jones lifts the pot and carries it to one of two roughly constructed ash benches placed on either side of the tree stump.

He hopes visitors will see this as a kind of sanctuary.

"I was hoping it would just be a meditative space to really feel gratitude for what you have,” he says. “You're about six feet away from someone sitting on the other bench over there, and so it kind of reminds you of that and just being grateful that you can see them face to face, you can speak to them, you can laugh, you can do all of those things which are really, really important when you add them all up."

Jeanette Jemison, program manager for Friends of Ganondagan, calls this space an "Earth Altar." She came up with the concept for the project as a thoughtful response to the pandemic and a path to healing. 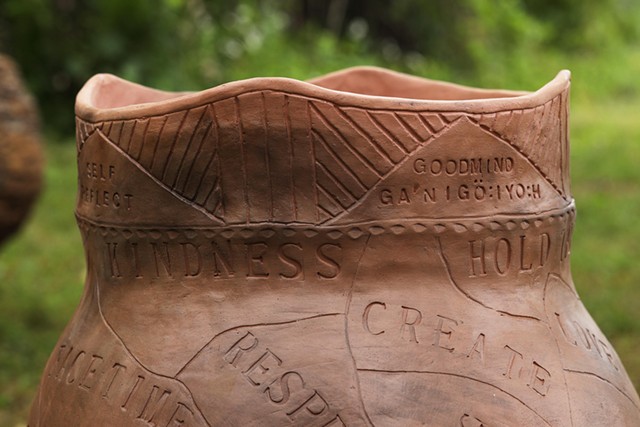 Native American artists and naturalists built five altars at various locations throughout the trails and grounds of Ganondagan State Historic Site, and other communities are designing their own altars.

"Because of COVID and everything we've all just come from — the violence, the racism, everything. It just seems so negative over the past couple of years,” Jemison says.

She also envisions the project as a bridge between different communities: Indigenous, Black, Latino, LGBTQ, refugees and people with disabilities. She invited them to design their own Earth Altars.

Each has its own style and symbolism.

EARTH ALTAR LOCATIONS
Disability rights advocate Luticha Doucette is building hers inside her Rochester apartment. It's a collection of potted plants. Some of them contain ashes of loved ones who have died, she said, from old age or illness because they did not have access to the treatment they needed during the pandemic.

"I've lost a lot of people in the last year, and this will be a way to remember them and give them a place of honor and that their memory will continue to live and grow as the plants grow,” she says.

Doucette is collecting written messages from people to tuck into the potting soil.

"That's why I chose plants, because they often remind me of, you have to dig into the soil. You have to uproot things. You have to take something that has outgrown its pot and put it into something else." 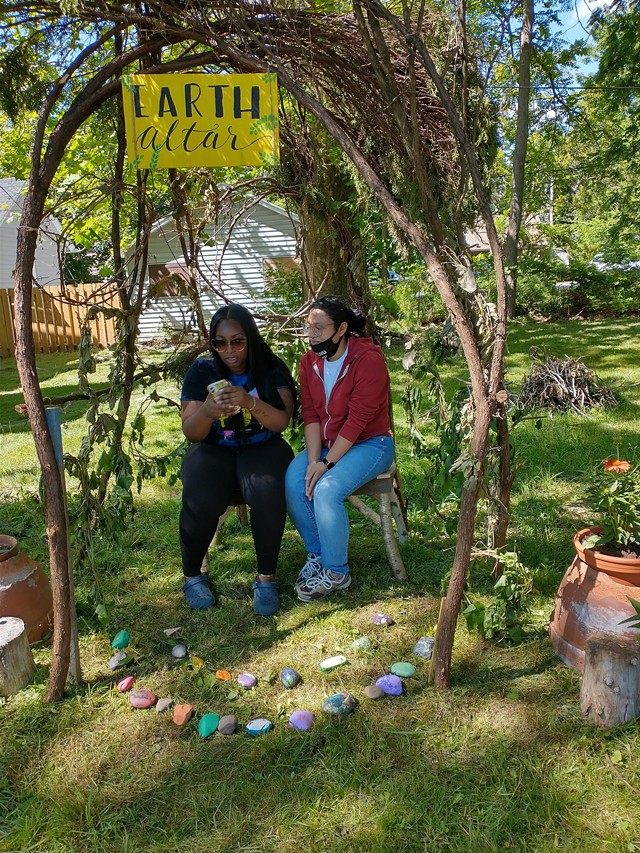 About 25 students at Rochester School 19 helped create the outdoor Earth Altar at the Gandhi Institute for Nonviolence on Plymouth Avenue.

Colorfully painted rocks form a circle at the base of trellis made from tree branches.

“We don’t plan on taking it down,” says youth educator Natasha Morrison, who led the project for the institute. She says the space, which is open to the public, will be refreshed each spring as a kind of living monument to the grief and loss endured by so many, but also to symbolize hope for the future.

For Rachel DeGuzman, president and CEO of 21st Century Arts, the community project is an opportunity to reflect on what she refers to as the dual pandemics of COVID-19 and systemic racism.

At The Black House on Tremont Street in Rochester, DeGuzman is getting ready to open what she calls a "peace altar," a nondenominational spiritual sanctuary.

Artist Miah Leslie is creating 3-foot-tall "worry dolls" made from recycled materials to define the space within the gallery.

"The worry dolls, we hope, will let people go into this space and leave some of the anxiety and negativity that we're all experiencing behind and connect with our common humanity,” DeGuzman explains.

She calls the atlar "Sans Souci," French for "without worry." It was the name of her grandmother's cottage in the historic Black resort Idlewild in Michigan.

People visiting the altar will be able to leave something — a note or a picture — and take something with them, such as a poem or an inspiring quote.

As much as people may feel the need to acknowledge and express the grief over what they've lost during the past 16 months, Jemison believes the Earth Altars offer the promise of something more.

"People are starting to come out of their houses and we're all starting to gather again,” she says. “It's a feeling of celebration, also, and maybe we're on our way back to a more positive place and that's what we hope these altars will all symbolize."

Beth Adams is a morning host and reporter with WXXI News, a media partner of CITY.