Dufus retrospective 'The Second Phone" is innovative and nonsensical 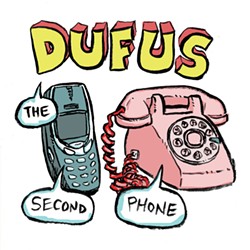 My first time hearing Seth Faergolzia’s freak folk band Dufus perform live was in the mid-2000s, at a small gallery called the AV Space. It was an eye-opening show: The band was weird, communal, and, most importantly, brimming with free-flowing ideas.

Dufus was based in Ithaca at the time, but had been born in the late-’90s in New York City, where Faergolzia and fellow former SUNY Purchase students helped to build a strange but endlessly creative music scene that included Regina Spektor and The Moldy Peaches in its ranks.

At subsequent Rochester shows, I would join Dufus on background vocals for select songs, and eventually was part of another Faergolzia band — 23 Psaegz — for several years.

Fast forward to today, and the now-defunct Dufus would have been 25 years old. In honor of this passage of time, on Oct. 31 Faergolzia released “The Second Phone,” a haphazard collection of songs, sounds, and experiments from deep within the Dufus vault.

Faergolzia’s music has always been and continues to be eccentric, as with 23 Psaegz and his current quartet Multibird. But there’s something specifically anarchic about the music of Dufus that’s captured on “The Second Phone.”

Lyrically, Faergolzia comes off mainly as nonsensical, but what sounds like stream-of-consciousness consistently yields ecstatic emotions: joy, frustration, wonder, and anger. If you’re looking for deep meaning, it may be difficult to find it in the words.

The music, however, sounds like one bizarre revelation after another, a vivid array of sounds characterized by bursts of melodies, frantic rhythms, madcap dissonances, and vagabond group vocals.

Piano and percussion especially shine on “The Chevitz,” which sounds like a punk-rocker getting a crash course in experimental chamber music. Improvisation comes and goes throughout loose song structures, as in the strangely mesmerizing “Go Donkey Hair.”

But the jarring sounds and unpredictable musical architecture belie the skill of musicians such as guitarist Rick Snell, keyboardist Grahm Dion, bassist Phil Timbakis, and Faergolzia. These same characteristics of the band also accentuate the silliness. There’s no better example than the live favorite “Fun Wearing Underwear,” which features a call-and-response between what appears to be warring factions:

Vol. 1 is a chaotic smorgasbord of live recordings, but Vol. 2 is a more measured collection of studio cuts.

The second set includes a previously unreleased version of “Giving In” (originally released as “Giving Inn” on the album “The Legend of Walnut”) that sounds decidedly spacier, and with plenty of space between the notes. The arrangement allows the listener to hear the individual instruments more clearly and separates the composition from the ramshackle sound of Dufus live, which often consisted of between 10 and 20 different musicians on stage.

“Sick and Tired,” also from “The Legend of Walnut,” feels more introspective, more heartbreaking on “The Second Phone,” especially with the blue tone of a saxophone and the lonesome reverb on Faergolzia’s voice.

Dufus completists will love this collection for rare gems such as an extended eight-minute version of the song “Dufus” — originally a blistering three minutes on the band’s brilliant but abrasive 2003 album “1:3:1.” There’s also an alternate version of the punk-funk fusion on the title track to end Vol. 2, as a bookend to a live rendition of the song toward the beginning of Vol. 1.

Here’s the bottom line: If you like your music odd —and I mean Captain Beefheart-meets-Daniel Johnston levels of odd — you’ll love this retrospective of Dufus’s music, as mastered by Nate Richardson at Ithaca’s REP Studio. These are raw recordings, but they exude magic, energy, and individuality. This New York City band may have been too experimental for its own good, but without it, Rochester may not have become home to Faergolzia, a prodigious songwriter who may always be underappreciated for his inventiveness. If enough people hear “The Second Phone” ringing out, that could change. Two additional Dufus compilations, called “Weirld” and “The Noo Yoo Maschine,” are due out soon.