Duffy on Cuomo allegations: 'Not once have I heard of such things'

PHOTO COURTESY OF OFFICE OF THE GOVERNOR Gov. Andrew Cuomo and former Lt. Gov. Bob Duffy in 2012.
Bob Duffy, the former lieutenant governor to Gov. Andrew Cuomo, said Thursday that during his time in office he never heard of any complaints of sexual harassment or inappropriate workplace behavior being leveled against the governor like those that have surfaced in recent weeks.

“Never,” Duffy replied in a text message exchange when asked directly whether he had ever known of such allegations during his tenure in Albany. “Not once have I heard of such things.”

Six former aides have accused the governor of sexual harassment or exhibiting sexist and patronizing behavior toward them.

Duffy’s response marked the first time that either lieutenant governor to serve under Cuomo has said whether they knew of any formal accusations or murmurings that Cuomo behaved inappropriately toward women who worked in his administration.

The current lieutenant governor, Kathy Hochul, who replaced Duffy in 2015, has come under fire from political opponents for dodging questions on the topic.

She has issued two prepared statements of little substance since the misconduct allegations against the governor came to light last month. The first, issued Feb. 27, supported an “independent review” of the facts. This week, she released a statement saying she trusts the investigation being overseen by the Attorney General’s Office.

Likewise, Duffy issued a similar statement earlier this week that read: “Those coming forward deserve to be heard and to have their allegations be thoroughly and independently investigated. I have confidence that the Attorney General’s Office and designated attorneys will do just that.”

A spokesperson for Duffy followed up on his text message Thursday to clarify that Duffy’s response should not imply that there were not allegations or whispers of inappropriate behavior against the governor during Duffy’s time in office, but only that Duffy never knew of any. 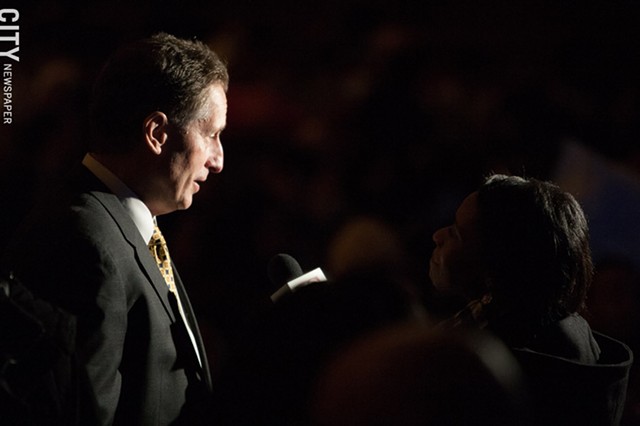 Duffy, the former mayor of Rochester and the current chief executive of the Greater Rochester Chamber of Commerce, was New York’s lieutenant governor from 2011 through 2014. The lieutenant governor is often portrayed by the governor as integral to the administration, but the position is in many ways ceremonial and marked by constant travel across the state.

Last year, Cuomo appointed Duffy as a special advisor to help his administration coordinate the public health response to the pandemic.

Cuomo is facing the biggest political crisis of his career between the allegations of sexual harassment and reports that his administration tried to conceal the number of nursing home residents who died of COVID-19.

Pressure for Cuomo to resign escalated Thursday after 59 Democratic legislators signed a letter calling on him to step down and Assembly Speaker Carl Heastie said they would weigh their options on the governor’s future.