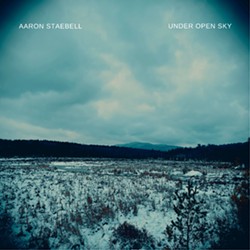 Plenty of Rochester musicians have been releasing pandemic-era recordings; few are celebrating the end of COVID hibernation with previously unreleased tunes from over a decade ago. But that’s exactly what jazz drummer-composer Aaron Staebell did when he suddenly, and with little fanfare, put “Under Open Sky” on Bandcamp in mid-June.

The live, unmixed album from 2010 features a quintet Staebell put together during graduate school in an effort to find connective tissue between the folk music tradition and jazz. The timing may seem odd, but the Eastman School of Music alum and local music teacher says he noticed similarities between the old project and new music he plans to premiere next year as “Harriettsville,” prompting him to unearth “Under Open Sky.”

While the sound recording itself is far from hi-fi, it captures the heightened ambiance of Howard Hanson Hall on the fourth floor of the Eastman school — and more importantly, the intuitive musical interplay between Staebell, tenor saxophonist Doug Stone, guitarists Mike Frederick and Simon Fletcher, and upright bassist Geoff Saunders.

The album starts with a faithful take on John Scofield’s swirling, up-tempo composition “Wabash III.” Staebell’s band adheres more strongly to a traditional swing-music sensibility than the original, but the result is no less energetic.

The majority of the remaining songs in the set are charming renditions of standards that were in part brought to prominence by folk revivalists such as Peter, Paul, and Mary; Judy Collins; and James Taylor. When it comes to covers, it’s difficult to innovate enough to warrant a new interpretation and still honor the original melody — particularly beloved folk melodies — but Staebell’s arrangements thread the needle.


“The Water Is Wide” drifts into a daydream, with a transportive guitar solo and eventually a Charlie Parker-esque bliss-out , but not without Doug Stone’s sultry delivery of the theme as bookends.


The tragic love ballad “Barbara Allen” shifts gradually between contemplation and ecstasy. The music nearly reaches free-jazz cacophony as Staebell punctuates the din with a barrage of rim clicks, rolls, and cymbal splashes, before the song closes as a kind of reverent lullaby. The quintet keeps up its mercurial approach on “Five Hundred Miles,” as the band flows through multiple time changes.


But the most surprising track is undoubtedly “Black Is the Color of My True Love’s Hair,” a song of Scottish origin that has an almost funereal beauty in versions by Nina Simone and Joan Baez. On “Under Open Sky,” music that was about pining for a far-away lover becomes a joyful exploration of jazz fusion. A Latin-infused rhythm sets the stage for effervescent guitarwork that spills into a dizzying sax solo.