Lunch break options for downtown employees continue to expand this fall with the opening of VOLO Osteria & Enoteca at the corner of Clinton Avenue and Broad Street. VOLO joins Original Grain and The Acorn Exchange as downtown's most recent additions to the lunchtime scene.

The new eatery is headed up by a familiar face: chef Giuseppe Paciullo, executive chef and owner at Fiamma Centro on Elton Street in the Neighborhood of the Arts. A native of Salerno, Italy, Paciullo is bringing a more casual, streamlined version of his popular restaurant to downtown Rochester.

Located adjacent to Xerox Square, VOLO is housed within a striking three-story glass pavilion, built as a pedestrian hub for the Rochester Skyway system. The building was formerly home to Café Sol and SKYWAY nightclub before both closed earlier this year.

Inside, the space is cavernous; stairs lead from the main dining floor to a second-floor balcony and to the third-floor private lounge. The glass walls let in plenty of daylight, and permit a 360-degree view of Tower 280, The Metropolitan, and the Xerox and Legacy towers. Patrons of the former Café Sol/SKYWAY will recognize the massive mirror ball, which still hangs from the lofty ceiling.

But the indisputable star of VOLO is the wood-burning Acunto Napoli oven, a dome-shaped brick behemoth which takes up a corner of the restaurant behind the bar. Capable of temperatures as high as 1000 degrees Fahrenheit, the oven bakes a pizza in just 50 to 60 seconds, Paciullo says.

In fact, everything on the menu is designed to be prepared and served quickly in order to accommodate people on their lunch break, according to Paciullo. The restaurant's name is actually the Italian word for "flight."

"We give you food on the fly," Paciullo says. Just don't call it "fast-casual." The chef prefers the term "fresh casual," as all food is cooked to order.

While the focal point of VOLO's menu is its Neapolitan pizzas, the new restaurant also offers salads and wood-fired entrees, plus wine, beer, cocktails, and espresso-based drinks. Paciullo plans to expand the menu as the restaurant evolves.

I visited VOLO on a recent afternoon not long after its opening. Taking a seat at a chic-looking gray booth near the window, I ordered the Pizza Diavola and Cauliflower Volo.

As promised, the pizza was ready in a flash, its crust dramatically bubbled and blistered from its short stint in the inferno. Topped with mozzarella, basil, and strips of spicy Calabrian sopressata, the 9-inch pie was indulgent and yet light and airy. (Unlike with many personal pizzas of my past, I did not feel the need to lie down and slip into a food coma immediately after finishing it.)

The cauliflower was roasted whole in the same oven as the pizza. This method yielded crunchy-tender stems and gently charred, crispy florets. An aioli of garlic and olive oil rounded out the simple but satisfying preparation. 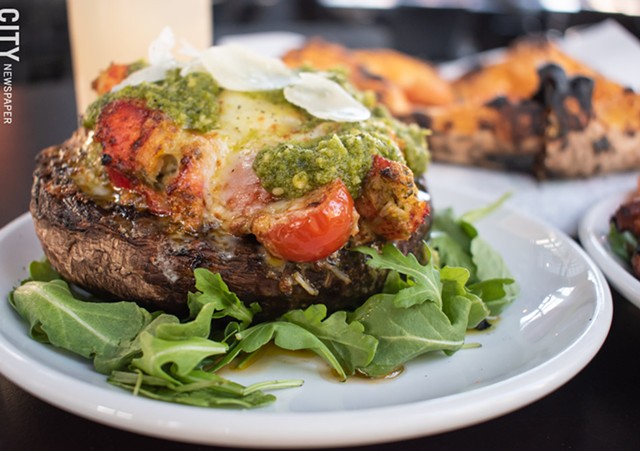 Items on Volo's menu range between $6 and $16, with wine and cocktails starting at $7. The restaurant serves lunch Monday through Friday, and dinner on Friday and Saturday. Though reservations aren't required for the restaurant, VOLO's third-floor lounge is bookable for private events and parties through an online contact form or by calling the restaurant directly.