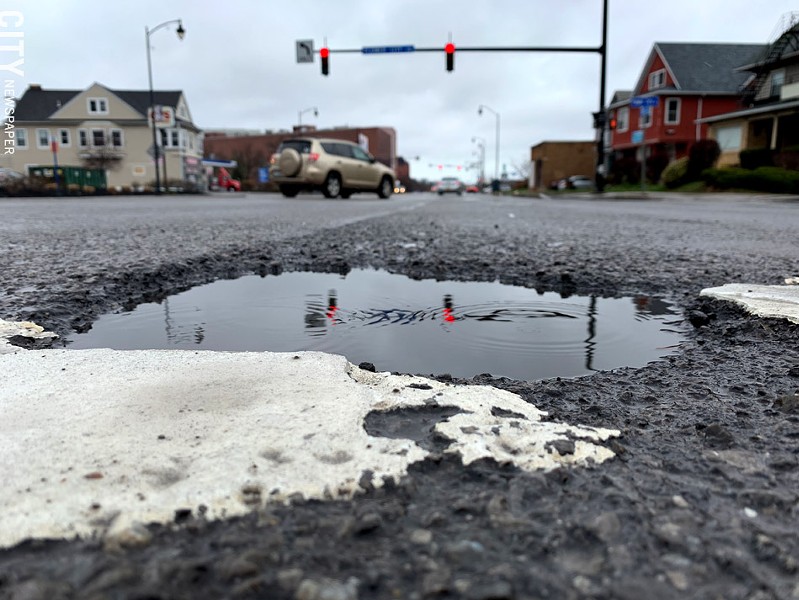 PHOTO BY RYAN WILLIAMSON Lake Avenue at Flower City Park: The heavily trafficked is street is hostile to pedestrians.

The state Department of Transportation is preparing to redo Lake Avenue between Lyell Avenue and Flower City Parkway, and pedestrians stand to benefit at least somewhat from the work. The DOT expects to begin milling and resurfacing the pothole-plagued street in a few months.

Lake Avenue has been, at its best, a somewhat hostile roadway for pedestrians and cyclists for a long time. It's a high-volume road; more than 29,000 vehicles, many of them trucks, travel it each day, says Jordan Guerrein, a spokesperson for the DOT. And every year, several pedestrians or cyclists are struck and injured or killed by drivers.

The DOT plans to make some pedestrian-oriented improvements along Lake Avenue in response to those incidents and for general safety purposes. It'll lay down high-visibility ladder markings for crosswalks, as well as high-visibility signs warning drivers of pedestrian crossings, Guerrein says. It also plans to replace traffic signals and put new pedestrian signals and push buttons at all intersections with traffic signals, he says.

The intention is to make both pedestrians and motorists more visible to each other, Guerrein says.

Residents and bike-pedestrian advocates have been very concerned about vehicle speeds on Lake Avenue for a long time, but the DOT's project doesn't include traffic-calming approaches such as a reduction in the number of lanes. In its current form, the project would retain Lake Avenue's current configuration – four lanes with a center turn lane – as well as its existing lane widths. The DOT also plans to leave the existing 35 mile-an-hour speed limit in place.

The agency is holding a public open house on the plan from 4 to 7 p.m. on April 23 at the  Edgerton Recreation Center, 41 Backus Street. DOT engineers and staff will be there to discuss the project and take residents' input.