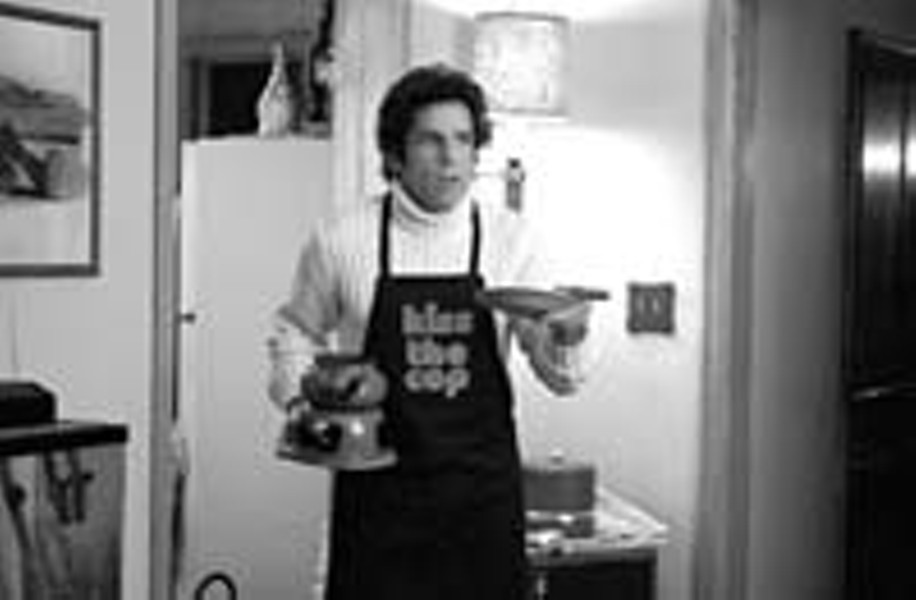 The second scene in Starsky & Hutch, directed by Todd Phillips (Road Trip, Old School), introduces the by-the-book cop, David Starsky (Ben Stiller), as he chases down bad guys in alleys and on rooftops. Stiller grimaces and strains and pumps his arms and legs in exaggerated fashion while in hot pursuit of the crooks. It's the first hint that the film and the jokes will be just as forced.

Right away the my-way-or-the-highway Captain Doby (Fred Williamson) pairs Starsky with the laissez-faire, rule-breaking cop Ken "Hutch" Hutchinson (Owen Wilson). Of course the two don't get along at first, but they must find a way to coexist in order to solve a murder and to bust a drug ring run by Reese Feldman (Vince Vaughn).

To expedite the case, they enlist the help of "urban informer" Huggy Bear (Snoop Dogg). I can hear the development meeting: "OK, Phillips... We've got Stiller and Wilson... but we still need more sizzle to attract the MTV crowd --- get me Calvin Broadus... er, I mean Snoop Dogg... and then throw in some eye candy with Carmen Electra and Amy Smart in throwaway roles as the cops' cheerleading girlfriends. Now we've got everything that a male TRLer would want."

Following the successful footprints of another hugely successful '70s revamp franchise --- Charlie's Angels --- the filmmakers put the crime fighters in several skits, wigs, and costumes. We get Starsky and Hutch as Easy Rider bikers. We get them as mimes. We get them as a Texas oil tycoon and an unctuous businessman. Remember, the film is set in the '70s, and loud '70s suits, sweaters, and big hair are funny (just like the white pimp with the huge, Afro wig at every Halloween party the past 10 years). So are disco dance showdowns with hokey dancers (Ben Stiller channels Charlie's Angel Cameron Diaz in this drawn-out sequence).

I didn't laugh much through any of this, while the matinee crowd only giggled slightly more. The clumsy insert of the original Starsky and Hutch (Paul Michael Glaser and David Soul) generated more gasps of "Man, they look old" than chuckles from the few in the young audience who understood the gag. Instead of laughing, I spent most of my time making mental notes of what songs I wanted to download from the fairly obvious '70s soundtrack, and I concluded that Eric Clapton's "Cocaine" would fit nicely on a CD mix.

Performance wise, most of the actors do OK with the script they're given, with the standouts being the likeable yet always the same Wilson, the versatile Vaughn, and the reliably funny Will Ferrell (an uncredited turn as a prison inmate with an affinity for dragons and dress-up games). Snoop Dogg, the latest rapper-turned-actor, basically plays himself.

My biggest problem is with the ubiquitous Ben Stiller. I just don't get him. Staunch defenders of his comedy often point to his sketch show from years ago. I've never seen it, but the show's episodic nature explains his acting style in movies --- a series of one-note caricatures stretched over 90 minutes.

I've read that director Todd Phillips wanted the film to play like a failed TV pilot. Well, with that as his goal, the film succeeds: He has created a failure. Unfortunately his movie will also succeed in perpetuating the brain-dead trend of dusting off old '70s shows, reworking them into feature films with today's stars, and packaging them for a teenage audience that never saw the original.

In Hollywood, baby, it's Show Business, not Show Art, and as forgettable as Starsky & Hutch is, it will be "America's #1 Movie" for a few weeks, spawn at least one sequel, and continue the strategy of mining television's past for future gold. (John O'Brien, one of the five committee writers of Starsky & Hutch, is currently drafting the feature length screenplay for The Dukes of Hazzard with rumors swirling that Ashton Kutcher will play Luke Duke and Britney Spears will play Daisy Duke).

Regarding all future remakes of TV shows and movies --- watch the original, not some contrived attempt at recreating it if you want true camp or kitsch or quality. Rent the DVDs or get TV Land added to your cable package. And only watch Starsky & Hutch the movie if, months from now, you find yourself in a boring town late at night, in a hotel room with free HBO.