Don Potter plugs into Christmas with the RPO

December 18, 2019
How do you celebrate the holiday season without it coming off like a Hallmark Channel Christmas movie?

Singer-guitarist Don Potter can’t tell you. He finds himself caught in that happy little chestnut-roasting vortex every year. His daughter grew up long ago, and the grandkids are “spread out all over the country, so to find them around is slim to none,” he says. In their place, Potter and his wife Christine celebrate in the community around them, among the hills of North Carolina.

“There’s a barn down the road,” he says. “We all kind of hang out there, put up Christmas trees, and play music, and shout and play. So, whatever the right words are...”

He pauses a half-beat, and finds the words: “It’s like a movie, you know what I mean? Do people really do that? And the truth is, yes, they actually do. I used to look at it like, ‘Are we really doing this? Is this a movie or are we really nuts?’”

“And it’s done very spontaneously,” he says. Spontaneously. Nuts. Not words often connected with a tradition-bound holiday such as Christmas. Or an institution such as the Rochester Philharmonic Orchestra. 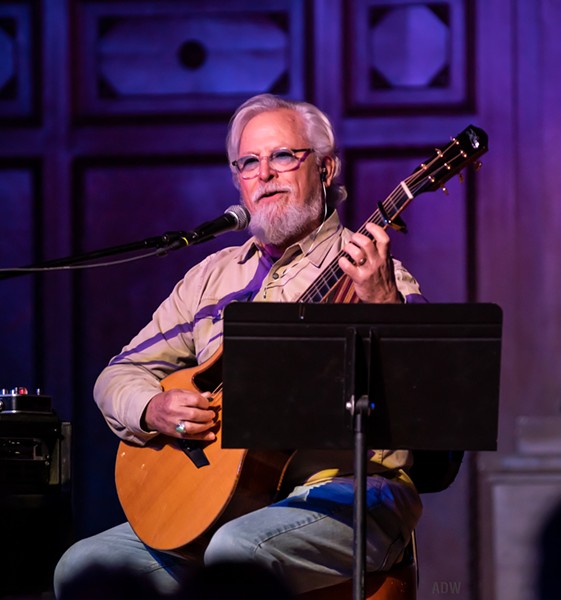 Potter returns to Rochester this weekend for four shows – one Friday, two Saturday, one more on Sunday — with Principal Pops Conductor Jeff Tyzik and the RPO. Also elbowing the cellos for room on the Kodak Hall stage at Eastman Theatre will be the 200-member Festival High School Chorale. What this one lacks in improvisation will succeed in careful curation and presentation.

This, despite Potter’s history of rock and roll in Rochester.

Following rehearsal the day before the first show at last year’s Gala Holiday Pops concert, Potter received a call from Bat McGrath. In the mid-’60s, the two had played in a rock band, The Showstoppers, which had been signed by Columbia Records’ legendary producer and talent scout, John Hammond. With their coffeehouse, Hylie Morris’ Alley, as well as playing as a duo, Potter and McGrath went on to be at the center of a Rochester music scene that gave us the Mangione brothers, drummer Steve Gadd, bassist Tony Levin, and many others.

But you know all of that, and were reminded of it again, during the past month. That phone call Potter received a year ago, after the final Gala Holiday Pops rehearsal, was McGrath delivering the news that he had terminal cancer. He died on October 1, and a tribute was held at a packed Lovin’ Cup Bistro & Brews just three weeks ago.

The years since the two men were making music together have seen Potter move toward producing other performers, such as The Judds, and promoting a music-filled Christian lifestyle. He works both worlds. In fact, he’ll return to Rochester in May for a show at the Lyric Theatre which will feature one night that will be “a connection again with people I know and haven’t seen in years,” he says. And then he’ll do a show the next night for “the church people.”

But this time of year, Potter is plugged into Christmas. Hence the return invite from Tyzik to sing with the RPO Pops. And with that comes an awareness that people’s expectations of Christmas songs come from years of wandering through shopping malls in a daze.

“I said, ‘Ah, I don’t know what I’m supposed to do in this thing,’” Potter says. “I know that some of the greatest singers in the world have sung the songs I’m about to sing, so I don’t know if I’m blessing this or if I’m, you know, insulting some of these amazing...” He pauses to consider the Christmas classics. “Who does ‘White Christmas’ better than, let’s see, Bing Crosby? Or after you hear Frank Sinatra or Nat King Cole or any number of people singing absolutely gorgeous Christmas songs? What do you do with it?”

When you’re messing with people’s cherished traditions — “I’ll Be Home for Christmas” — there’s a fine line to be walked. “I just feel like it’s a beautiful sentiment, it isn’t too sappy, if you know what I mean,” he says. “It’s not too syrupy, and yet it really is sincere.” He likes “O Holy Night,” but after hearing it from voices such as Wynonna's, “I’m not that big, huge singer type, so I didn’t want to abuse such a beautiful song,” he says.

Potter’s being modest, as anyone who’s ever heard him sing “Somewhere Over the Rainbow” will attest. He suggests “Chestnuts Roasting on an Open Fire” might be more manageable, and because he likes “that Mel Tormé thing, he’s so cool.”

“Being in the music business, I’ve made a lot of Christmas records with different artists that, when you get a certain amount of fame, you make a Christmas record, it’s sort of natural,” Potter says. “And somewhere in doing that, I came up with a bunch of arrangements, over the years, of standards, that stuff we knew.”

“Most arrangers and conductors — as Jeff is — they’ve done so much of it, they’re pretty much out of ideas. When I showed up with just slightly different versions, he was really happy: ‘Oh, this is great, this is new.’ So we, thankfully, got away with it.”

But sometimes, no amount of pearls can dress up a pig.

“Rockin’ Around the Christmas Tree,” Potter says. “You know only so many ways you can hear that, that you can stand it.”

Politically-driven comedian Bill Maher returns to Rochester for a May 31 show at 8 p.m. at the Auditorium Theatre.

While Maher is well-known for his often controversial talk shows — first “Politically Incorrect,” and for the last 15 years, HBO’s “Real Time” — Maher has never stopped doing standup comedy (although his starring roles in “Cannibal Women in the Avocado Jungle of Death” and “Pizza Man” seem to have brought his film career to a halt).

Yet on his season-ending show last month, Maher expressed regret that his acerbic satire may be contributing to the divisions we see today in this country. “Yes, I have said things like that,” he told his audience, “but I’m going to try to stop because I have learned that the anti-intellectualism on the right doesn’t come primarily through stupidity. It comes from hate. Telling people that you think they’re irredeemable is what makes them say, ‘You know what, I’d rather side with Russia than you.’”

Second only to 39 versions of “The Nutcracker” when it comes to local holiday traditions, Watkins & the Rapiers return with a new show, “Holiday Storybook,” at 8 p.m. on Thursday, December 19, at The Little Theatre in Theater 1. The local band — whose catalog of original Christmas-themed music now numbers 88 satirical and celebratory songs — first presented this multimedia extravaganza in 2016 (watch for a cameo by a local arts writer in one of the videos accompanying this year’s show). Tickets ($20) are available at thelittle.org and the box office at 240 East Avenue. For a scaled-downed, cheaper (free) version, Watkins & the Rapiers are playing at 7 p.m. every Monday in December at The Little Theatre Café.