Dominic Pezzola, accused in insurrection at the Capitol, held without bail 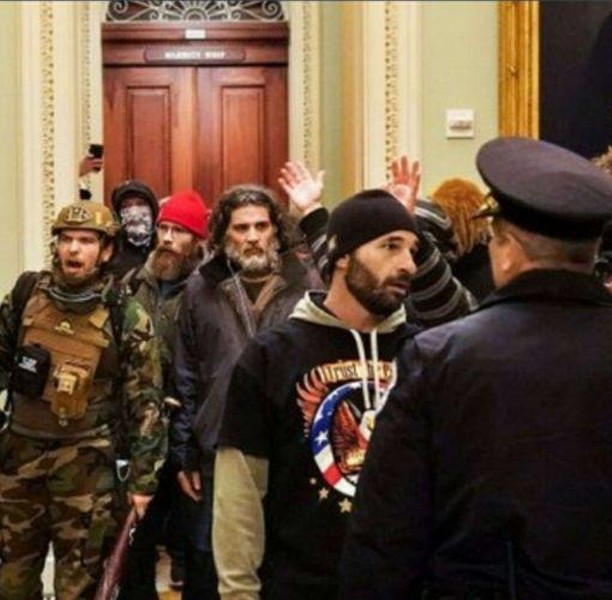 PHOTO COURTESY U.S. ATTORNEY'S OFFICE Insurrectionists stormed the Capitol on Jan. 6, 2021. Federal prosecutors say the bearded man in the center of the photo is Dominic Pezzola of Rochester.
The Rochester man accused of being part of the group that breached the U.S. Capitol on Jan. 6 will continue to be held without bail.

Papers were filed this week on behalf of Dominic Pezzola, 43, in a federal court in Washington D.C. His attorney argued Pezzola should be released on his own recognizance.

Federal authorities accuse Pezzola of using a police officer’s riot shield to help smash his way into the building, something that Rep. Stacey Plaskett, one of the House impeachment managers, talked about during testimony on Wednesday.

“He commandeered a Capitol Police shield, used it to smash a glass window, entered the Capitol and paved the way for dozens of insurrectionists,” Plaskett said during the U.S. Senate impeachment trial of former President Donald Trump.

In court papers, Pezzola’s attorney said his client was responding to the unfounded comments by Trump that the election had been stolen, and as a result of the experience, Pezzola would not be so easily "duped" again.

Later on Wednesday, according to Politico, U.S. Magistrate Judge Robin Meriweather called her decision to detain Pezzola “a close call,” given his lack of a criminal record before joining in the takeover of the Capitol. But, as reported by Politico, the judge indicated she was concerned that Pezzola might try something similar to the Capitol riot in the future because of his strong belief that the current government is illegitimate. Pezzola was ordered held without bond.

Pezzola, an alleged member of the far-right organization the Proud Boys, pleaded not guilty to the 11 charges against him. Those charges include conspiracy, civil disorder, assaulting, resisting or impeding certain officers, and destruction of government property.