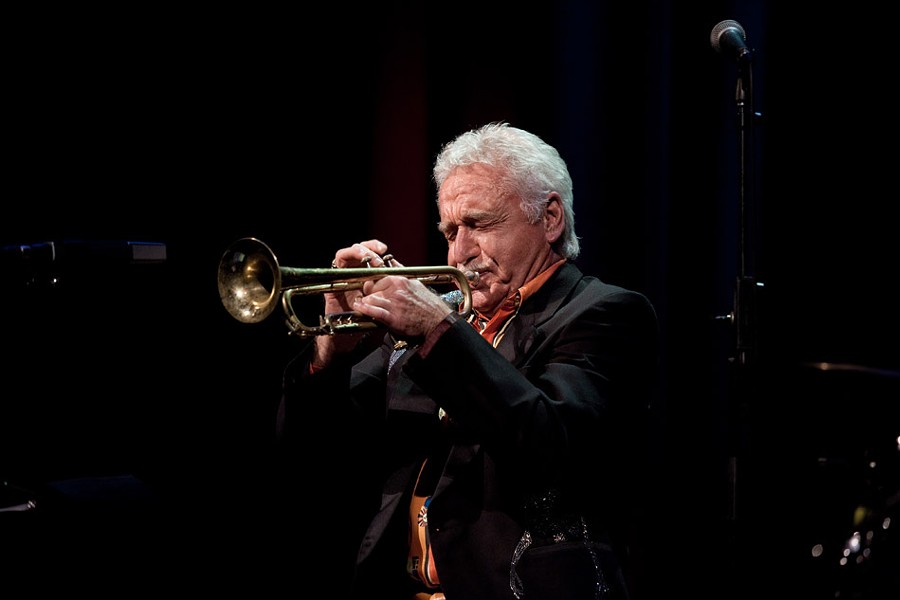 When he was 7 years old, Carl Severinsen asked his dad for a musical instrument. His father, a violin-playing frontier dentist (hence Carl's nickname, "Little Doc"), wanted his son to play fiddle. But Carl insisted on a trombone.

Just one problem: there were no trombones in Arlington, Oregon's small-town music store, so they settled on a trumpet. The following week, Severinsen was asked to join the high school band. How did he get so good so fast?

"It was a small cowboy town, there wasn't that much to do, and my dad was on my case constantly making sure I didn't do things wrong," says Severinsen, who guests with the Rochester Philharmonic Orchestra on Friday and Saturday.

The family did not own a record player and it wasn't until several years later that Severinsen could tune in faraway radio broadcasts featuring the bands of Tommy Dorsey, Harry James, or Benny Goodman if it was a clear night and he got lucky. Still, by the time he was 17, Severinsen was good enough to hit the road with the Ted Fio Rito Orchestra.

The band's older players may have been more sophisticated, but Severinsen had an advantage. "My dad and the high school band director would enter me in competitions around the state and I won all of them," Severinsen says. "It automatically set my sights higher. What I learned from my father was quite a bit better than what these guys had."

Severinsen believes today's aspiring musicians could use some tough love.

"My father standing over me and not being afraid to criticize me — that's what's lacking today," Severinsen says. "No one wants to offend kids and they're not criticized at home. They get to school and the band director has something to explain to them and he's afraid to do anything because the parents will yell at him for yelling at their kids. Kids go through life that way. They can't take criticism so they never get to be as good as they ought to be."

In the late 1940's, after a stint in the Army during World War II, Severinsen joined many of the bands he'd heard on the radio including those of Dorsey, Goodman, and Charlie Barnet. By the mid-1950's, he was playing on records with singers like Dinah Washington and Anita O'Day. And in the late-1950's, he was in the horn section on cutting-edge albums like George Russell's "New York, N.Y.," a record featuring John Coltrane, Bill Evans, and Max Roach.

In 1962, Severinsen got the gig that would make him a household name: first trumpet in The Tonight Show band. He took over as leader in 1967 and held the position for 25 years, also taking on the role of the flashy dressing, exuberant sidekick to Johnny Carson.

"I always was that way, overly outgoing," Severinsen says. "When you're a young kid in a cow-town and all your classmates are cowboys and football players and you weigh about half as much as they do, you find ways to make up for the differences by trying to get laughs or being a character.

"I was an unusual kid; I was pretty much the town character. When I was old enough to go out and start playing in bands at rodeos my mother made me a fire-engine red, silk satin shirt to wear. I loved that shirt."

In a career that has stretched over eight decades, Severinsen has had no shortage of high points, but one stands out: the night he played a particularly difficult trumpet concerto by Stephen Paulus with the Los Angeles Philharmonic at the Hollywood Bowl in September 1991.

"I guess I just got lucky," says Severinsen. "I had no idea what was happening when it was happening, but when I came off stage, I realized that I had a pretty doggone good performance. Billboard magazine reviewed the concert. They don't hand out good words too easily and they gave me far past a glowing review. That didn't impress me, but it just reassured me that that was pretty good. As a sheer trumpet player, that's the best day I ever had."

At 88, Severinsen, who shares a birthday with his favorite composer, Gustav Mahler, maintains a busy concert schedule. "I have to keeps tabs on my physical condition, stay physically fit and eat right. And don't lower your expectations. You can't stand up in front of an audience and say, 'I'm 88, so it probably won't sound so good.' You have to just make up your mind to do the very best you can."

At Kodak Hall, Severinsen is bound to play some charts by RPO Principal Pops Conductor Jeff Tyzik, who he met decades ago though trumpeter Al Vizzutti when Tyzik and Vizzutti were students at the Eastman School of Music.

When Severinsen, several years later, needed some music written to set him apart from other trumpeters, "I knew that Jeff was the logical guy to do it. The music was advancing and Jeff took me right along with it."

There's another Rochester connection: Early in his career, Rochester's great avant-garde trumpeter Paul Smoker was having physical issues playing. As he put it in a 2010 interview, he was fortunate to run into Severinsen, who had gone through a similar problem and gave him valuable advice about how to solve it.

"I met Paul when he was a student at the University of Iowa," Severinsen says. "Paul was just a hell of a good player, a fabulous player. You attempt to be helpful; it's reassuring to hear that it did some good.

"Trumpet players are a brotherhood. We're united because of what we face every day. It's like being an opera singer. The first thing an opera singer wants to know when he wakes up in the morning is, do I still have a voice. It's the same thing with a trumpet. Do I still have the ability to pick that thing up and play it well? It never goes away."