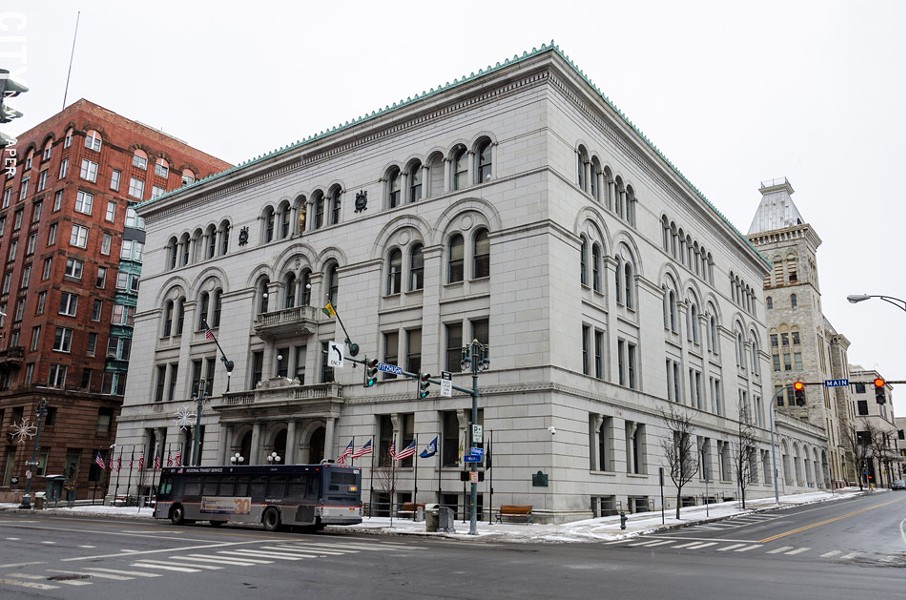 Monroe County Executive Cheryl Dinolfo's 2019 budget will knock the county tax rate down by a dime, making it $8.89 per $1,000 assessed value. That's if the proposal passes, which it probably will, since Dinolfo's a Republican and the legislature majority is made up of Republicans.

The rate has been flat at $8.99 for roughly a decade, Dinolfo said as she presented her budget today in the County Legislature's chambers.

"I always want to do more," she said.

Dinolfo rolled out parts of the budget earlier this week, but released the whole thing today, about a week before it's due and less than a week before high-stakes state and federal elections.  She pointed out that the $1.2 billion plan doesn't call for any layoffs or new fees-for-service, and doesn't rely on the sales of any county property to balance it.

She touted the $2.5 million the budget invests in county economic development programs, including plans to move the Department of Planning and Economic Development offices from the eighth floor of City Place on West Main Street to the first floor.  Putting those offices along West Main "sends a very, very strong signal" that Monroe County is serious about jobs and economic development, and that it's "open for business."

She said county economic development programs have retained or created 19,000 jobs in less than three years.

Dinolfo said that efforts to recruit, add, and retain caseworkers have been successful. Of the 2017 hires, 75 percent were still on the job at the one year mark, an increase compared to the 2015 hires, of whom 57 percent were still with the county one year after they were hired.

And the budget provides $50 million to cover the costs of contract settlements with some of the county's larger unions, Dinolfo told reporters after her presentation.

The big question — and one that Democratic Minority Leader Cynthia Kaleh asked after the presentation — is how the county is paying for all of these things while cutting taxes.

"On the outset of it, the image that it gives, it looks good," Kaleh said. But she added that "the devil's in the details."

Dinolfo says the county has trimmed money out of the budget a few different ways. It's saving about $2 million this year by bringing the functions previously handled by quasi-governmental local development corporations back in-house, she said during her presentation. In a press release, she spelled out some other sources of savings: contract reassessments, debt refinancing, and health-care costs. The budget also projects a $4 million increase in sales tax revenue and $4 million in income from selling property tax liens.

What she didn't say is that the property tax levy – the total amount raised from property taxes – under the proposal is increasing from $382.8 million in the 2018 budget to $394.4 million. The assessed value of taxable properties in Monroe increased by $1.7 billion, too: it grew from $41.6 billion to $43.3 billion. Allowing the levy to grow in line with the tax base is generally considered good budgeting.

Dinolfo also focused part of her presentation on the county's requirements under New York's Raise the Age laws. The laws were part of the 2017-18 state budget and require state criminal courts to treat on-violent 16- and 17-year-old offenders as juveniles, not adults. Dinolfo said she wan't taking a position on Raise the Age itself, but warned that the change will cost the county around $20 million for facilities and other capital costs, and $11 million annually for operating costs. She called on all of the County Legislators to work with her and push Albany to follow through on a promise to reimburse counties for those costs.

Those remarks irked Democrats. Vince Felder, whose district covers part of the city's Northeast, said the issue is very important to a lot of his constituents.  And to the county's credit, it's complying with the law, he said. But focusing on the immediate cost is short-sighted, since Raise the Age will have long-term benefits.

"Even if the costs didn't get reimbursed, in the long term it'll save the county money" Felder said.