Dinner and a show

The scents of chocolate, bagels, and citrus floated through the auditorium air during JCC CenterStage's current show, "Raging Skillet," which runs through December 22. It's based on "The Raging Skillet: The True Life Story of Chef Rossi," a memoir by a rebellious lesbian Jew-turned-famous New York City chef. This is the third such project for Rossi, who previously wrote two full-length plays, "Miss New Jersey" and "Queen of the Jews."

Chef Rossi has been the recipient of many awards, and is known for her wild, cutting edge catering style. Her catering company "The Raging Skillet," the book's namesake, was called "a new breed of rebel anti-caterer" by The New York Times, and is the preferred caterer for many New York City institutions, including the annual V-Day celebration with Eve Ensler, creator of "The Vagina Monologues."

The plot of the play follows Rossi's earlier years, though — the formative times between her mother's (non) cooking during her childhood, and her stint as the executive chef of a pop-up beach bar that began as three trailers and several tons of sand on a harbor overlooking the Hudson River. In fact, much of the show is about Rossi's relationship with her Jewish mother (who has quite a story of her own).

Playing the three characters in the show are Stephanie Roosa (as Rossi), Davida Bloom (Mom), and Laron Dewberry (DJ Skillet). It's a small but mighty cast, pulling off the tasks of of DJing, cooking, and monologuing throughout the 90-minute show, which runs without an intermission. It's also a conversational show, breaking the fourth wall immediately as the actors address the audience directly.

Roosa has the heaviest lift in the cast, personifying both a living character and the creator of the show — the HBIC, as she refers to herself — and she plays the role with a confidence and wryness that emulates Rossi's vibe. Her swagger is matched by that of the talented Dewberry, who's quickly becoming a familiar face on Rochester stages (his first two shows were at Blackfriars). Rounding out the cast is Bloom, who plays the Jewish mother with such aplomb that it elicited constant laughter and murmurs from Sunday's older audience. 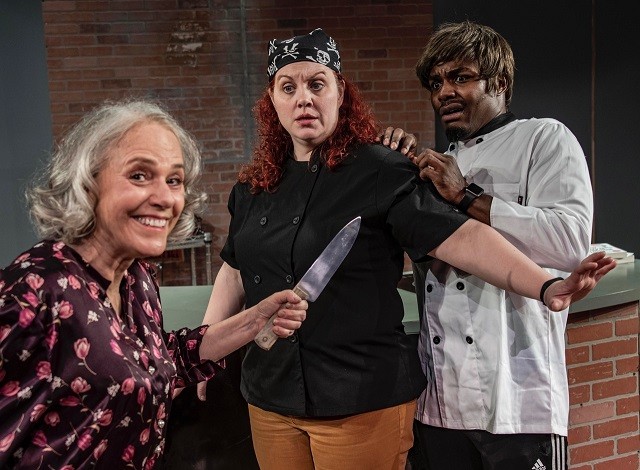 The set mimics a TV cooking studio, with a central island unit where the cast preps and serves several appetizers and a spritz that are contextual for the story and featured in the memoir. The set includes bright colors, a huge sign emblazoned with "Raging Skillet," and a TV mounted to the front of the stove unit showing real photos from Rossi's past, providing more context than a monologue ever could — a connection with Einstein, for instance. (You have to see it to believe it.) A fun addition to the show is the set of bistro tables onstage, which seat about six people. Audience members seated there were the lucky recipients of all the snacks cooked onstage.

This is only the sixth production of "Raging Skillet" (including two readings) and CenterStage's production is the official world premiere of the show. From here, it's on to chances of off-Broadway and beyond. Rossi herself was in attendance on Saturday and Sunday to mingle, sign books, and participate in a talkback. (She'll be back December 21 and 22 for another round.) During Sunday's talkback, Rossi's sense of sheer excitement about the whole experience was apparent, and contagious. Her zest for life is infectious, and "Raging Skillet" is a touching tribute to her career, her mother, and living that life to the fullest.