If you've never been to The Arnett Café my guess is that, on your first visit, you'd find it familiar and welcoming. Sunshine floods the front dining room through its storefront windows. The staff welcomes you with megawatt smiles. And the menu has lots of comfort foods: burgers and fries, grilled cheese, and pancakes.

Many of the menu items have a distinctly Southern flair — an evident point of pride for The Arnett Café. For $10.95, you can order one of the house specials, like the huge portions of Cajun fried fish (served on Fridays); shrimp and grits; or chicken and waffles.

The waffles are astounding: slightly sweet and malty. The size of a dinner plate, they're light with a delicate interior, and on the outside, the waffles are golden brown with an addictive crispness that stays intact, even after being covered with butter and syrup. Usually a waffle gets soggy under toppings, or softens from its own steam; I don't know how The Arnett Café keeps them both crisp and tender. Kim Brown, who co-owns the restaurant with her husband Norman, and Shenise Wright, says there aren't any secrets to the preparation — "Just love." (But there's got to be something more to it than that, right?) 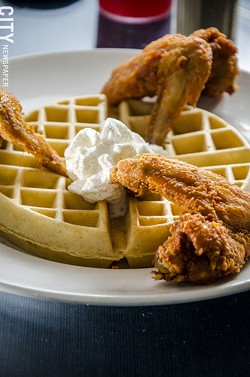 The waffle is topped with three hefty, battered and fried chicken wings. If Popeye were a chicken, these would be his wings, robust and ready for action. The drum, flat, and tip are left in intact, resulting in a meaty, juicy treat that gives your teeth something to sink into. Lightly battered and fried, the coating is slightly under-salted, though that's easily fixed at the table. The best bites of the chicken and waffles are bites of each, eaten together.

Another house special, the shrimp and grits, comes on a large dinner plate which is covered with creamy cheese grits, and topped with three diamond slices of American cheese. (Grits can be ordered without cheese as well.) The grits are hearty, filling, and go down easy. Nestled on top of the grits are six plump, pink shrimp. They are lightly seasoned and tender. On the opposite side of the plate is a tomato-based Creole sauce, similar to salsa, with hunks of tomatoes, peppers, and onions.

I wasn't able to try the Friday fish special, but I did eat its breakfast cousin: fish and grits ($6.95). A choice of either catfish or haddock is coated in cornmeal and fried until pale golden brown spotted with darker, crisper areas. The catfish was mild and the cornmeal coating popped pleasingly between my molars. Served with the fish and grits were a pile of home fries. Cut a little larger than playing dice, they're cooked until their jackets start to peel away and edges get very soft. The home fries are especially good with squirts of Boss Sauce, bottles of which are on each table.

There's nothing on the menu that's more than $12, so it's easy to spend less while filling up. The French toast ($3.95) is a steal: three griddled pieces are cut on the diagonal and dusted with cinnamon and powdered sugar, and served with butter, syrup, and a pouf of whipped cream. Order a side of the outstanding pork sausage links ($1.75) — like the waffle, they're among the best of their kind in the city — and you've got a great meal for under $6.

If you have a sweet tooth, you can wash it all down with the strawberry lemonade ($2). Bright red, it's the same shade as cherry Kool-Aid and just as sweet. The lemon pulls it back from being cloyingly sweet, but don't kid yourself: this is candy in a glass.

The Arnett Café was filled with friends and families during my visits. Over bites of eggs and sips of coffee, they caught up, talked news and politics, or made plans. It seems in the year and a half The Arnett Café has been open, it's become a favorite community spot to break bread.