Early on a Saturday evening, I drove with my husband along 490, toward West Avenue. The sun was shining, traffic was flowing, and my stomach was growling in anticipation of dinner.

Just prior to crossing the Douglass-Anthony Bridge, the scent of barbecue — a perfume of smoke, meat, and char — wafted through the air. My mouth watered.

"I hope Unkl Moe's food tastes as good as that smells," I said. As it turned out, the scent was Unkl Moe's food. We'd come upon two of their trucks, house-made smoker units in tow, headed back to the restaurant after catering an event.

I'm not generally one for omens, but I took this as a good one. Pressing down on the gas pedal a little more, I urged my car forward, eager to get there, order a plate and dig in.

The same smoky perfume greets you when you step into Unkl Moe's, which serves barbecue and traditional, Southern-style favorites seven days a week. The restaurant is owned by Moses "Unkl Moe" Smith, with many recipes from Smith's wife, Bernice. The day-to-day responsibilities are handled by General Manager Tony Clark, his primary role making "sure that the customers and employees are well taken care of."

You can see that played out in this family-style restaurant, both in the clientele and the tight-knit crew. The waitresses might call you "Honey" when taking your drink order (go for the sweet or half-and-half iced teas at $1.50), and you'll catch snippets of conversation and laughter from the kitchen. At the tables, friends, couples, and families catch up while mulling over the many menu choices and, later, digging into brimming plates.

The restaurant has the feel of a well-worn diner from the 70's: lots of wood grain on the walls and the tables, the tiled floor not as bright as it perhaps once was, and the ceiling shows signs of age. If Unkl Moe's is more of a neighborhood joint than a "restaurant," don't think that its diners are only from the immediate area. The food is too good to not draw in chowhounds from across Rochester. 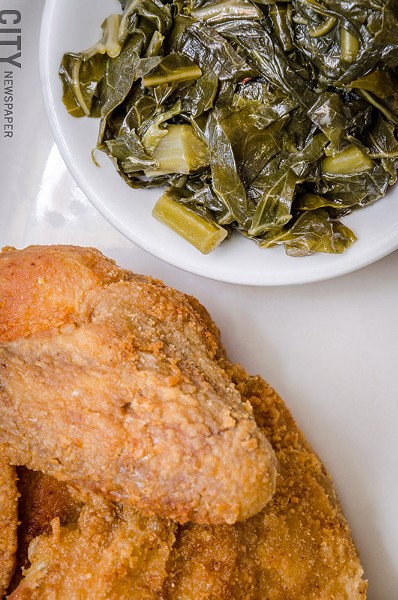 Take the chopped BBQ turkey ($10.50 with two sides), an item not found on many local menus. Smoked long and slow in the smokers crafted by Smith and a co-worker, the turkey has visible traces of a smoke ring, the pink coloring just under the skin — a hallmark of well-made barbecue. Drizzle on the house-made BBQ sauce if the meat is a touch dry, or just because the sauce is that good. Thinner than a ketchup-based sauce, this is more sweet than spicy, but there's a kick you can see before you taste it: the sauce is dotted with hot pepper flakes and seeds.

More traditional barbecue items include the pork ribs ($11 with two sides) and brisket ($11.50 with two sides). Both have that much-sought-after smoke ring, formed when nitrogen dioxide from the burning wood smoke combines with the moisture in the meat to form nitric acid. Better yet, both have bark, that tantalizing dark crust that can form on the exterior of barbecued meats. Sweet, chewy, and rich with flavor, the bark is what makes barbecue lovers swoon.

There's more bark on the ribs, because there's more surface area in the cut. They're also fattier (this is not a bad thing) and give you something to chew on — very tactile. For all these reasons, I generally prefer ribs to brisket, but the sliced brisket at Unkl Moe's should not be missed. In addition to its smoke ring and bark, it features the clean, straight marks of a grill; a rich, meaty flavor; and a chew that's tender without being flabby. It also has burnt ends, the tips packed with bark-y, beefy goodness. A friend of mine calls eating Unkl Moe's brisket "a religious experience," and maybe he has a point. If beer is proof that God loves us and wants us to be happy, why can't good barbecue be evidence of the same thing? 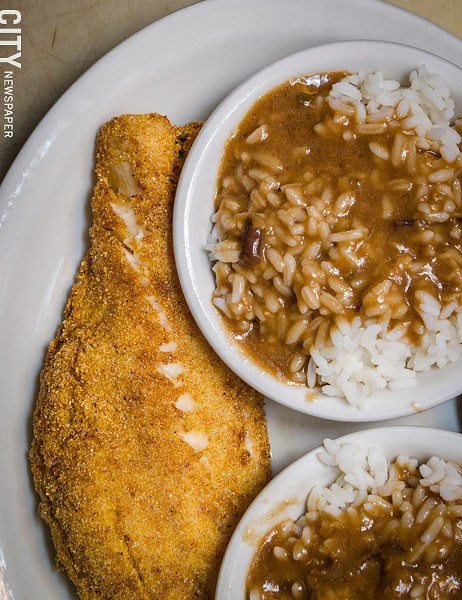 Once you've figured out the main meal — fried catfish with a cornmeal crust ($10.50 with two sides) and oxtail ($8.50 mini/ $10 full, both on a bed of rice) that tastes like the best beef from the best beef stew, are other good options — you'll have to decide between a slew of side-dish choices. These can be included with a meal plate or ordered a la carte ($2.75-$3).

The candied yams are sweet enough to be a dessert in and of themselves. With brown sugar, butter, vanilla, and nutmeg — at least, that's what I think; Smith is coy on the details — they're a taste of Thanksgiving available all year. The fried okra, sliced into bite-sized chunks, has a lightly salted, cornmeal-coated crunch. Hot from the kitchen, it's all too easy to pop them into your mouth so quickly that it's a surprise when the bowl comes up empty.

The macaroni salad is made with cavatappi (corkscrew), a toothy, mouth-filling pasta, giving the mayo dressing and flavors of celery, pepper, and onion lots of room and ridges on which to cling. Best of all are the sweet-potato fries. Crispy on the outside with a pillowy interior, these plank-shaped fries are sprinkled with touches of sugar and cinnamon. In some spots, the heat from the fries melts and caramelizes the sugar, leaving little pockets of glaze; they're phenomenal.

If you have a sweet tooth, it would be a sin not to order an Unkl Moe's dessert. Individual sweet-potato pies ($2.50) are small enough to hold in your hand and have a soft crust and a filling that's sweet, rich, and surprisingly tropical. (Is the secret pineapple juice? Lime? Smith remained mum.) The peach cobbler ($4.50), available on Saturdays, is light and fruity, deepened in flavor by cinnamon. At the other end of the spectrum, the banana pudding ($4) served on Fridays is lush, creamy, and dense, with vanilla wafers softened to a cake-like consistency.

Places like Unkl Moe's, devoted to food and family in equal measure, are increasingly hard to find, and important to enjoy. So round up those you love and tell them you're taking them for barbecue — and to save room for dessert.