The heat is on

Sweat breaks across my forehead. My eyes tear up. My nose is running. And I swear that my ears are ringing. I've only scooped one or two tangles of bright white rice noodles from the bowl of lava-red broth in front of me and I'm already in agony — the good kind of agony. The second bite is even more intense, and by the third — this time with a bit of cabbage and some chopped chicken — I'm waiting for the welcome numbness that often dulls the burn of some of the world's hottest cuisines. Ten minutes later, with my bowl only half empty, I'm praying for endorphins, for numbness, for oblivion. But it doesn't come. As I near the bottom of the bowl, the settled spices and herbs get even more vicious, the burn complemented with the aroma of lemongrass and Thai basil, ginger and cilantro, smoked chilis and garlic. This bowl of khao poon may be the best Thai food I've ever eaten anywhere, and if I'm suffering for it, I have no one but myself to blame: I was the one who thought I could handle three out of four stars.

At the 6-month-old Thai Lao Restaurant on the corner of University Avenue and Union Street, the menu is small, but the flavors are big. Unlike so many Thai-like restaurants in the area, Thai Lao's chef and owner Tommy Xomvimane does not pull his punches. The food comes in four degrees of spiciness (he claims that he can make things even spicier, but anything past four makes even him a bit dizzy) and is full of flavors that aren't commonly prominent in Rochester Thai food: fish sauce, fermented bean paste, and herbs for which no English names exist.

Xomvimane, who learned to cook by watching his mother and then making her recipes his own (although Mom occasionally pitches in at Thai Lao's kitchen), presents the same food at his restaurant that he eats at home. It's a risky move — and one that some of his family members discouraged when he proposed it, instead suggesting that he go to work in an established Thai restaurant and learn how Americanized Thai food was made. But given the growing interest in Asian cuisines and the less-timid palates of the current generation of diners, this is one risk that seems to have paid off for the 38-year-old chef. Business, he tells me, is good, and a steady stream of regulars bring more and more of their friends into the fold all the time, giving the restaurant what feels like an almost cult-like status among foodies. This is one place where you can get "real" Thai food in the Rochester area.

But most of Xomvimane's menu isn't strictly speaking Thai at all. It's Laotian food, and the chef is quick to point out that only a tiny number of restaurants (by my count, two) in the area present Lao food rather than Vietnamese or Thai cuisine. Lao is a hybrid of the two, borrowing the heat and curries from Thailand, and a predilection for grilled meats and noodles from Vietnam. 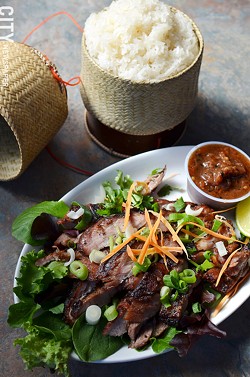 So, you might begin your lunch or dinner in Saigon with a plate of tender, translucent Vietnamese spring rolls ($5.99) full of fresh greens and tiny shrimp along with rice noodles and a sweet and sour peanut sauce to dip them in, but your meal might end with pad Thai ($6.99-$8.99) — although this is pad Thai like you've never had it before. Unlike most versions of the dish that end up bright red and with only the faintest taste of shrimp and a mostly sweet flavor profile, Xomvimane's pad Thai noodles end up an appealing tan color because of the generous dollop of hoisin sauce that he stirs into them, and the fish sauce that is normally left out of Americanized versions of the dish is here in full force (albeit well-balanced with other flavors in a feat of kitchen alchemy), highlighting the fresh shrimp rather than burying it in starch. Think of it as pad Thai for those who favor savory over sweet.

Other, similar combinations leap to mind. A plate of tender grilled pork marinated in lemongrass and garlic ($12.95) is about as Vietnamese a presentation as I can imagine, and one of the more satisfying ones to boot. But where it would be served with rice noodles and fresh vegetables in Vietnam, here Xomvimane pairs it with that quintessentially Thai dish, shredded green papaya salad. The crunch and icy heat of the salad pairs beautifully with the smoky meat, and if you really need a bit of extra fire the chef will gladly add a scoop of pickled ground hot peppers to the meat, giving it more heat and a nice briny accent. 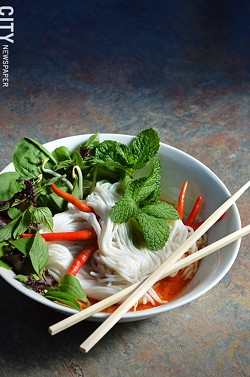 It's chili-heads, though, who will find their true heaven at Thai Lao. At three out of four stars, the khao poon ($7.95) that I had for lunch one afternoon was the hottest thing I've ever put in my mouth, inducing a pleasurable endorphin stupor that lasted most of the afternoon. The dish, a combination of thick rice noodles, roasted cornish hen, green herbs, shallot, scallion, and both cabbage and field greens luxuriating in bright-red broth wasn't the one-dimensional fire bomb that you often encounter. The heat acted as a carrier for other more subtle spices and aromas, drawing you back again and again, even if you know you'll pay for it later on.

This subtle and skillful hand with the spices and heat sets Xomvimane's food apart from other Thai and Lao restaurants in the city, making it worth the trip even if you can't stand the full force of the fire burning at the heart of almost every dish on the menu. And if you can't take the heat, you can always take refuge in a glass of strong iced coffee enriched with sweet condensed milk — a perfect salve for a burning mouth and a nice pick-me-up for the afternoon.