Paleo, but no dinosaur burgers

Following a diet is, in general, difficult. The science regarding what we "should" eat is confusing. Remember when eggs were bad for us? Or when carbs were a good thing? A recent study suggested that saturated fats, named as a risk factor for heart disease for more than 20 years, might actually be benign.

Still, diet regimes capture attention and fantasy, and I am not immune. I have been on my share of diets (or, more accurately: the same one, over and over again). By far, the largest challenge has been eating out. Where can I find something that I like that's on the plan? If I go out with friends, are there items on the menu they'll like, too?

Park Avenue's Roam Café provides one solution to this quandary, particularly if you are on the paleo diet. In case you aren't familiar, paleo posits that we should be eating like our Paleolithic ancestors, consuming only seafood, meats, fruits, vegetables, nuts, etc. No dairy, no cereal grains, no refined sugars. 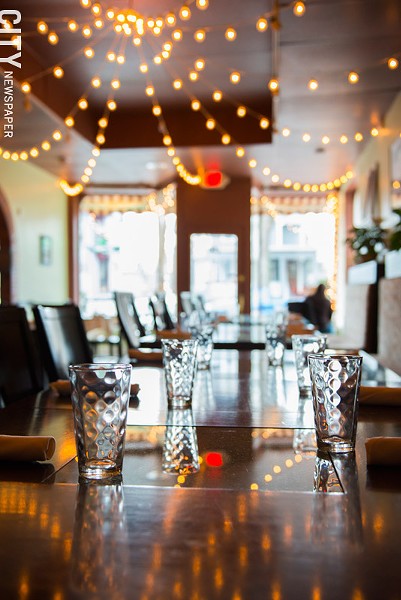 Shortly after Roam switched owners in the summer of 2011 — you may remember it as a café serving up both gelato and motorcycles — paleo-friendly items started popping up on the menu. "It's been well received," says co-owner Marie Nye, who runs the restaurant with Drew Nye and Maurice Kusminsky. "There's a strong presence of paleo-conscious people in Rochester." The menu is not entirely paleo friendly, but there are enough options to make ordering simple for those who are on the diet — all paleo dishes on the menu are clearly marked.

Most of the paleo items aren't unusual, either. The ribeye steak ($20, includes two sides) is just what you'd expect, well marbled, and flavorful. The steak we ordered was just under an inch in thickness, and this thinness may be the reason why it came cooked to medium when it had been ordered medium-rare. The flavor held up nonetheless. Topping it with not-paleo-friendly blue cheese ($1) added salt and a pleasing funk.

The stockyard sirloin steak ($18, includes two sides) is thicker, standing two inches tall. Tender and bloody (the way it was ordered), it oozed juices on to the plate and never became dry. These juices are tasty when mingling with the (non-paleo) garlic parmesan fries (included with the steak, or $3.50 as a side). On their own, the fries have a light garlic and parmesan flavor, crisp texture, and light brown color. They're good, but so much better when they've soaked up the steak's jus.

The thick bone-in pork chop ($17, includes two sides) is rubbed with espresso, grilled, and then topped with a dried cherry reduction. The coffee flavor isn't pronounced; if anything, it adds charred notes to the dish. The cherry reduction resembles a wine-tomato sauce; it adds a hint of sweetness and fruit, but if you didn't know it was made from cherries, it would be hard to identify it as such. Both the sweet-potato mash and sautéed garlic spinach (included with the entrée, or $3.50 each) are paleo sides. The sweet potatoes are roughly mashed, with fibers still visible. They're sweet but not overly so, nor creamy — there's no added sugar or dairy fat creating the richness you might normally expect. The spinach is mildly garlicky. Like kale, it's one of those vegetable that lends itself to feeling smug about healthy eating. The tomato and cucumber salad (included with an entrée, or $3.50 as a side) was bland, a poor echo of the vitality and freshness the vegetables yield at the height of summer.

Zucchini cakes ($7) are one of two paleo items on the appetizer menu (the other is steamed clams, served in a white-wine-lemon broth for $10). Like miniature, browned omelets or servings of egg foo young, the cakes are spongy and eggy, the bits of green zucchini vividly present. The menu lists these as being topped with caramelized onions and crispy prosciutto. The onions, however, hadn't been fully caramelized — they were pale brown and mellow, not mildly sweet. The prosciutto was difficult to see or taste.

The best items Roam Café has to offer, however, are not on anyone's proscribed diet. The espresso martini ($8) blends vanilla vodka with Baileys Irish Cream and espresso. It is lip-smackingly tasty, the kind of drink that disappears quickly without asserting its power until it's too late. This drink not only won best cocktail in the 2014 Battledish Rochester competition, it won that category in the 2014 national Battledish competition. (Full-disclosure: I served as a guest judge in Battledish Rochester.)

Lastly, let's hope the sweet-and-sour duck-wing appetizer ($10) moves from a special to a regular menu item. Three to an order, meaty drumsticks about four inches long are fried and then tossed in a tangy sauce. The mildly acidic sauce plays off the meat's richness. It's a refined take on the Buffalo wing, and a nice way to enjoy duck.

If we're lucky, the next nutritional study will proclaim the health benefits of fried food and alcohol. Until then, you can eat virtuously — or not — at Roam Café.