DINING REVIEW: On a Roll

Let's get something out of the way: Part of the appeal of Orbs Restaurant & Bar is that you can make a lot of testicle jokes. "Mmmm! I cannot wait to grab some balls!"

Orbs is in on the fun. Meatball sandwiches are called "Balls and Buns," a meatball sampler is "Bits and Pieces," and to-go orders are packed in "The Ball Sack." It's a bit like "Saturday Night Live's" Schweddy Balls skit come to life.

But there's more to Orbs than Beavis and Butthead-style jokes. The atmosphere is upscale casual: lots of wood, stone facades, chalkboard menus, and flat screen TVs over the bar. There's a full bar with around 10 beers on tap, and a rotating choice of cocktails. Owners Bob and Sue Caranddo and Executive Chef and General Manager Steven Lara (formerly of Dorado) provide a solid menu with plenty of non-meatball choices. 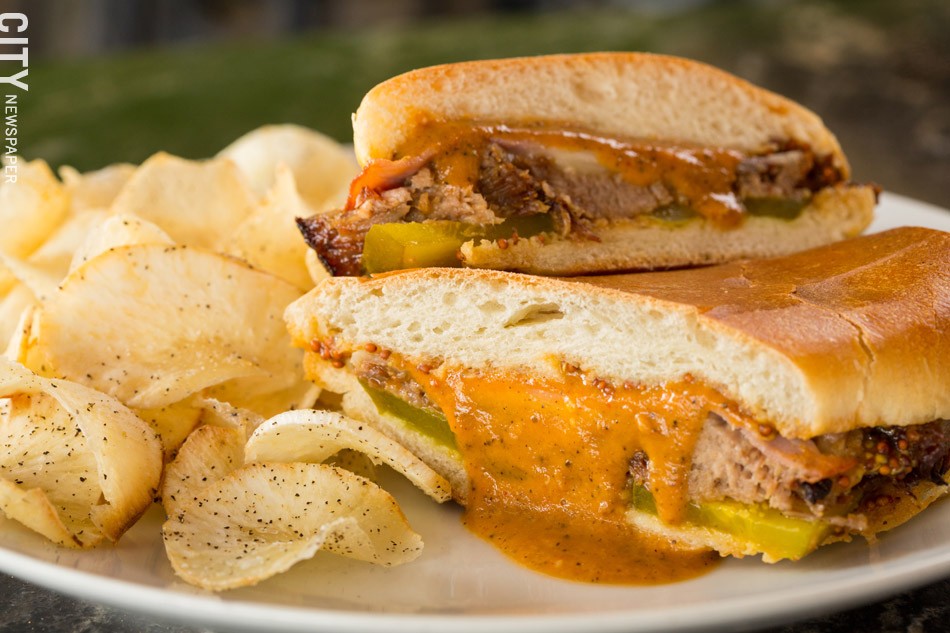 Of course, the meatballs make up the restaurant's core. The standard rotation features beef, pork, chicken, and vegetarian balls, with different preparations depending on the time of year. Meat is ground in-house and shaped daily. There's some overlap in variety between the appetizer and entrée menus, but the appetizer meatballs weigh in at about an ounce each and the entrée meatballs at about 2.5 ounces a piece.

Sampling a variety is easy to do: Appetizer balls come five to an order for $6. The $9 sampler (the aforementioned "Bits and Pieces") offers three of each type of appetizer ball, for a total of nine. For entrees, there are the three-to-an-order meatball sandwich sliders ($10) with the option to choose three different kinds of balls. Other meatball entrees offer three or four of the same meatball on a sandwich ($10) or in a bowl with focaccia bread and sides ($11-$14).

Beef Asian balls, found on the appetizer menu during my visit, were lightly covered in a sweet glaze with a gingery punch, like a BBQ sauce that had wandered through Chinatown. Its smokiness and mild heat played off the crunchy and cool, thinly-sliced cucumbers and red onions plated with the meatballs.

I ate three of the entrée meatball choices — Angus beef, Buffalo chicken, and chicken and rice — as individual sliders. They're served with provolone cheese and pesto sauce, but are lost among the bolder flavors. The other issue with the sliders is the abundance of bread. The roll is taller than the ball, and has a puffy top, making it hard to eat.

The meatballs themselves shine. The Angus beef meatball was served with marinara, and both were hearty and had good depth of flavor. (I think I tasted red wine in the sauce, which was delicious.) The ball, like the others I tasted, was tender, moist and loosely packed: it crumbled a bit when I broke into it with the side of my fork. I would have liked a light crust on the meatball to add structure and a textural contrast.

The Buffalo chicken meatball, found on the lunch menu during my visit, was especially good. It had a spicy tingle and sharp, vinegary punch — just like Frank's Red Hot — and some blue cheese added more creaminess than funk. The spirit of chicken pot pies is imbued in the chicken and rice meatball. Topped with a mushroom gravy, it's a great choice for the dead of winter, when all you want is warm, comforting food.

As mentioned, there's more on the menu than meatballs. The excellent rockin' beet salad ($6) pairs roasted beets with field greens, topped with candied walnuts and a honey-yogurt dressing. Falafel ($6 appetizer as the Veg Balls) have a crisp exterior, tender inside, and a tasty tahini drizzle, placed on a bed of kale chimichurri. The Arancini ($11), served one night with marinara, Parmesan cheese, hunks of Berkshire bacon (less smoky and salty than regular bacon), and snappy peas, were satisfying.

Recent dinner specials included pappardelle pasta with wild boar ragu ($14), seared scallops ($22), and chicken confit tacos with mole ($8). On Sundays, Orbs offers brunch with favorites like chicken and waffles ($9) and coddled eggs ($7), plus a gargantuan sounding entrée called the Vermonster ($9) which sandwiches peanut butter, Berkshire bacon, a fried egg, cheddar cheese, and maple syrup between two waffles — with a side of chorizo hash.

It sounds like a gut buster, though at Orbs, maybe that should be a ballbuster.