PHOTO BY MARK CHAMBERLIN The Tiki Torch roll from Nikko.

When a new restaurant hits the scene, the first adjective that often gets tossed around is "trendy," and that's not exactly a compliment. Because while being of-the-moment is cool and all, that moment won't last forever. There will always be someplace newer, and those so-called foodies will wander off to chase the proverbial dragon. At that point a restaurant has to find its permanent niche, and two years after its opening, Nikko seems to have settled into a truly tasty groove.

Oodles of restaurants have come and gone in Rochester since Nikko's debut, so you'd be forgiven for forgetting about it. Nikko can be found downtown by Geva Theatre Center, at the corner of Capron Street and that little tendril of South Avenue under the entrance to 490 East. "We're centrally located, I'd like to think," says co-owner Marco Muoio, "but we're kind of out of sight, out of mind."

Or you may remember Nikko as that place with the ambitious menu consisting of sushi along with various Asian- and Italian-inspired dishes. This is still somewhat accurate. "What it's evolved into is almost comfort food with quite a bit of technique behind it and using premium ingredients," says Muoio. "We found that doing more approachable dishes but adhering to the standards that we've set from Day 1 is what's been successful."

"Comfort food" was precisely what I was thinking as I tucked into a luscious plate of duck confit and pierogies ($18), the tender pasta filled with potato, onion, and bacon, and mingled with meaty shreds of duck, expertly trimmed heirloom baby carrots (still with their tiny tops!), thinly sliced brussels sprouts, and a plate-lickingly good duck demi-glace. I also blissed out over a velvety orecchiette carbonara ($24), the rib-sticking richness mellowed by salty pancetta and roasted cauliflower florets, then gilded with a perfect soft-boiled egg. The "little ears" also anchored another pasta special, a deliciously simple dish of tender roast pork, creamy white beans, and escarole, kissed with garlic bread crumbs then kicked with crushed red pepper, lest anyone get too comfy.

The toast point that accompanied the elegant beef tenderloin carpaccio ($15) was sized more like a surfboard, but I ain't complainin'; that just meant more real estate on which to arrange the accoutrements, which included piquant horseradish and an intense hard cows' milk cheese of Swiss origin called Belper Knolle. A decadent smoked blue-cheese fritter nearly stole the show in the baby spinach salad ($13), served with a tiny quail egg, an airy brioche crouton, and a deftly seasoned bacon-sherry vinaigrette. The gorgeously plated slow-roasted pork belly entrée ($16) was also a study in contrasts: succulent pig, earthy truffled cauliflower, and a sassy fennel and apple salad. 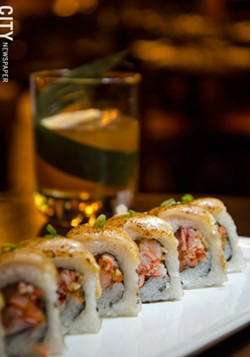 Though it may seem incongruous, the light, clean maki at Nikko are actually a lovely way to begin a meal. (Or end one; I'm not the boss of you.) The Jolly Green Giant roll ($9) is really just a tubular salad, an unfussy composition of tempura sweet potato, avocado, and cucumber in brown rice. Eel lovers should appreciate Snake and Eggs ($15), which wraps tamago (that's the Japanese egg omelet), scallion, and cucumber with brown rice and tops it with smoky-sweet barbecued eel. And the Tiki Torch ($16) manages to be virtuous and hedonistic all at once; it's got lobster, salmon, and crunchy bits of tempura inside white rice, topped with escolar and umami-rich miso mayonnaise, then torched. Keep in mind that Nikko slashes $4 off its rolls (as well as a few bucks off drinks) for happy hour, Tuesday through Friday 4:30-6:30 p.m., at the bar.

Executive chef Max Spittler has been a part of Nikko from the beginning, and it's clear that he and his staff take great care with all aspects of the food, from its thoughtful construction to its expert preparation, precise seasoning, and meticulous plating. (That seasoning thing might seem like a given, but too many other places are lacking.) Service is totally on point as well; twice I had the same excellent server, the easygoing Dominique, who is like a ninja in an apron, replacing silverware, refilling water, and delivering plates in the most unobtrusive fashion. The dining experience can be a little leisurely, but it's nice not to feel rushed. 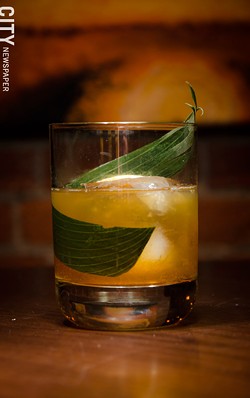 Muoio is serious about Nikko's wine program, with a globally sourced selection. But I'm serious about good craft cocktails, and the Nikko list does not make it easy to choose. The refreshing Fancy Pants ($9) mixes peach brandy with elderflower liqueur and passionfruit juice then finishes with a splash of champagne, while the Reap What You Sow ($10) went down a little too easy, the taste of ripe blackberries well-balanced by white tequila, thyme, and fresh citrus. That said, The Hammock ($10) might have been my favorite, notes of caramelized banana hitting your nose just before a blend of bourbon, walnut liqueur, and black-walnut bitters slide down your throat.

Rebecca Nucelli is Nikko's pastry chef, and her irresistible desserts have definite roots in Italy. I remember hearing words like "crostata" and "cannoli," but I had already decided upon a salted-caramel tart ($8), its inherent sweetness mitigated by whole hazelnuts, dark chocolate, and a couple quenelle-shaped dollops of vanilla whipped cream. Her dense, sinful peanut-butter semifreddo ($7; think of it as a frozen mousse) was garnished with caramel and chocolate sauces, a couple of strawberry halves, and two chewy coconut macaroons.

I might not pair two assertive flavors like peanut butter and coconut, but then again, I also probably wouldn't dare to marry Japanese and Mediterranean on a menu. That's why I'm more than happy to leave these things to the professionals.