Dessert is often a casualty in culinary cost-cutting. An eatery might work to keep a good steak on the menu, top-shelf liquor behind the bar, and fresh greens in the salad, only to phone it in for the final course. Sometimes literally, by placing an order with Sysco.

On the flip side, when a café specializes in desserts, it frequently lets its entree offerings fall to the wayside. Is it worth it to dutifully eat through a ho-hum chicken Caesar salad just to earn dessert? (OK; sometimes the answer is yes.)

It's a breath of fresh air, then, when a restaurant equally distributes its attention across its menu. You'll find this at Fraîche Bistro & Dessert Bar, which devotes its talent and energy to each item it serves, whether it's for brunch, lunch, dinner, or dessert.

The 9-month-old restaurant on East Avenue is owned by pastry chef Kathy Christa. Christa studied at New York's International Culinary Center (formerly the French Culinary Institute) and cut her teeth turning out desserts at Henry B's. While there, she worked with chef Eric Schmeelk, who now serves as Fraîche's head chef.

Together, Christa and Schmeelk have created a well-rounded, French-inspired menu, showcasing local products and seasonal flavors. Filet de Boeuf ($26) is so tender you barely need a knife; it yields to the side of a fork. Part of this is due to the cut of beef (tenderloin), part is due to the way it is cut in the kitchen, and part is due to careful pan-searing. All of it adds up to a delicious preparation. It's served with a demi-glace, sautéed haricots vert (green beans sound so much more elegant in French), house-cut French fries, and a horseradish aioli, prettily presented in a hollowed-out tomato. 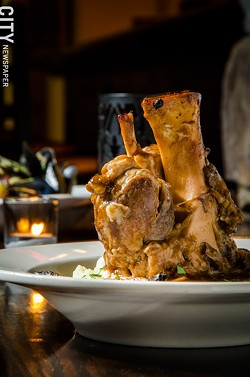 Equally satisfying is the jarret de pork ($28), a pork shank slow roasted and braised with a balsamic vinegar demi-glace. It's an impressively tall and mahogany-colored hunk of meat. Like the beef, the pork is mouthwateringly tender. The pork is served on a bed of garlic and green-onion-infused mashed potatoes that are so creamy and smooth, they don't dare dream of the possibility of lumps. Well-roasted carrots add color and crunch.

Mussels ($14) come heaped in a bowl, resting in a pool of apple-cider cream sauce. It's a portion generous enough for dinner, though it's listed with the appetizers. Hunks of bacon and green apple are nestled between the shells. The mussels taste clean and sweet — no taste of low-tide here — and work well with sweetness in the apple and the smoke of the bacon. Garlic-bread strips are delicious on their own, but the garlic's pungency is a bit sharp for the more delicately flavored sauce.

Fraîche's brunch offers a smattering of its standard lunch offerings, plus dishes specific to the Saturday and Sunday brunch service. You can find salad nicoise, French onion soup, veggie omelets, and a Greek yogurt and granola "Fraîche plate" on both menus. Steak and eggs, stuffed French toast, and breakfast poutine — plus mimosas and bacon bloody Marys — are confined to brunch.

The sour-cream-blueberry pancakes are served with orange butter, maple syrup, and a choice of bacon or sausage ($12). The pancakes are more creamy and lush than a standard pancake, owing to the sour cream's dairy fat. Blueberries literally burst on your tongue, and the orange butter adds an addictive citrusy pop. 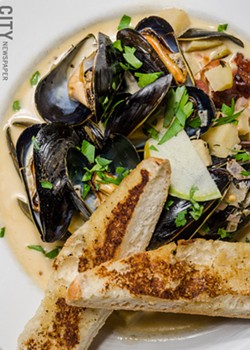 The torta rustica ($12) is a flaky, savory pie. The crust is sort of a cross between a pie crust and a croissant — golden brown, flaky, lots of layers. It encapsulates a filling of ham, roasted red peppers, mushrooms, spinach, and mozzarella, and somehow manages to be hearty without being heavy. It is served with a small mound of lightly dressed greens and red onions, which provides a nice contrast. (This is another item found on both the brunch and lunch menus.)

And now it's time for dessert. (Did you save room?) The simply named "sundae" ($7) pairs salted caramel ice cream with chocolate sauce and house-made caramel corn. Like Cracker Jacks, the caramel includes salty peanuts, which are a nice foil for the silky ice cream.

The caramel pretzel shake ($7) blends vanilla ice cream with housemade caramel, pretzels, and caramel vodka. It's so thick that your cheeks will pucker when you try and sip it through the straw. (I gave up and used my spoon, which let me eat more, anyway.) Tiny bits of pretzel fleck the shake, making for a sweet, salty, and malty treat.

Other hard shake offerings include s'mores, made with marshmallow vodka, graham crackers, and chocolate syrup; and coffee & donuts, which incorporates Intelligentsia Coffee, coffee vodka, and a glazed donut from Donuts Delite.

Though Fraîche opened three months prior to The Revelry, it doesn't seem to have the name recognition that buzzed-about University Avenue restaurant enjoys. If you go for dinner on a Wednesday or Thursday night, or for brunch on Saturday, you won't have to wait for a table. That's puzzling; the Fraîche team delivers well-executed dishes, provides an upscale yet comfortable atmosphere, and is staffed by attentive, knowledgeable servers. Take the time to discover this little gem before the rest of Rochester does.