How are the bagels at Balsam Bagels? They are good — and not just by Rochester standards but by NYC-bagel-capital-of-the-world standards. If Balsam Bagels served its coffee in Greek-styled paper cups, it might be hard to remember which city you were standing in.

Balsam's bagels are dense, tanned circles with a glossy, almost shiny, exterior; underneath, where the bagel touched the oven, it's several shades darker. Look closely and you can see how the dough rose and stretched during the proofing process: an edible topographic survey.

When taking a bite, you break through a millimeters-thin layer of crispy crust, and its gentle crackle resonates. Especially when toasted, biting produces little flying shards of crust, like breakfast shrapnel. Chewing works your jaw. These are not airy, light, doughnut-shaped rolls. They are bagels: substantial, filling, and carb-laden.

Getting those critical bagel qualities down is a multi-step process. It starts by weighing ingredients then kneading them together, developing the flour's gluten. The dough is allowed to rise before it's shaped and proofed. During the proofing process, the dough relaxes, rises again and develops additional flavors through fermentation. The raw bagels then take a quick bath in boiling water, which helps set the crust before baking. After this, they're placed on burlap-covered straps and put on shelves in a commercial baker's oven. The oven's shelves circulate the bagels like kids on a Ferris wheel, and after a few trips, are ready to be eaten.

If you time it right, you can watch bagels being made on site at Balsam. And if you're patient, you can get a bagel while it's still warm.

Balsam has more than 20 types of bagels to choose from. The rye bagel is intensely flavored, slightly sour, and has a cool aftertaste. It's studded with caraway seeds, which snap and pop between your teeth. The pumpernickel bagel — which Balsam's Facebook page gleefully reports as being German for "devil's farts" — is more subtle in flavor. The bagel is dark and cocoa-like in color, and would work well in a pastrami sandwich ($6.99 with one side).

The sundried tomato bagel is upfront with a warm and inviting flavor. With bits of tomato throughout the dough, the bagel reflects the fruit's concentrated sweetness and umami. There's another nod to Italy with the pesto bagel, which has an undercurrent of basil and grassy notes. While basil can generally be powerful, it's subtle here and could even use a little more oomph.

The plain bagel is just that: plain, simple, and a vehicle for toppings. I prefer its cousin, the salt bagel, topped with crunchy and opaque salt crystals like you'd find on a soft pretzel. Admittedly, the salt bagel is just another way to get a creamy-rich topping into your mouth, but I like the added texture and saltiness. 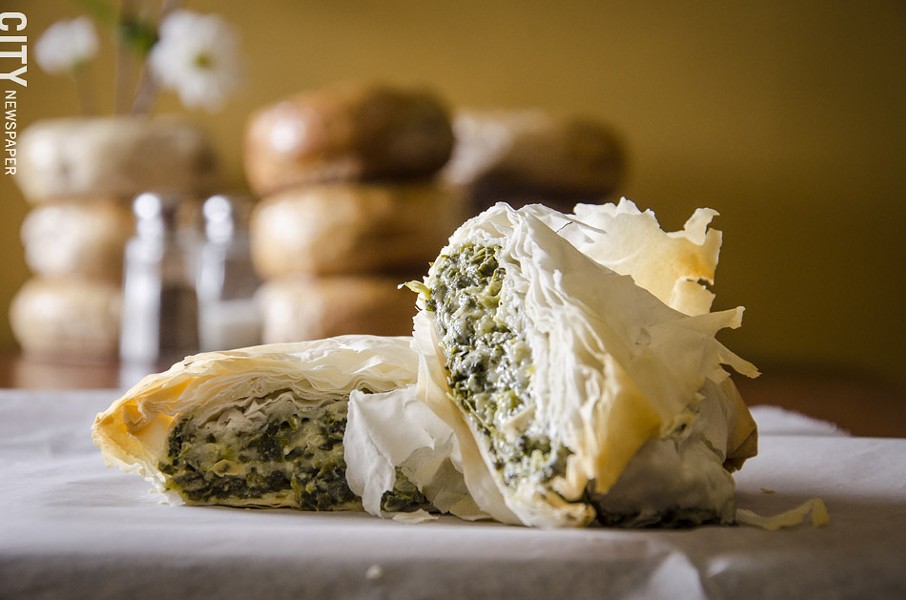 Its flashier cousin, the breakfast cinnamon raisin bagel, is sprinkled with cinnamon sugar before baking. The sugar makes the bagel a little sticky, a little crunchy and, of course, sweeter (which is right up my alley). I ate it as-is.

Bagels are 99 cents apiece, $5.49 for a half-dozen, and $8.99 for a dozen. Add cream cheese, however, and the price rises: a bagel with plain cream cheese is $2.75; with flavored or vegan cream cheese, it's $3. That's quite an upcharge for a restrained schmear.

The cream cheese served is Ontario, New York's Lighthouse Cream Cheese, which is also available in 8-ounce tubs for $3.69. There are upwards of 25 flavors to choose from, even a vegan option, though many of the choices start with plain cream cheese. The plain has a nice, light tang with a balanced approach to salt. It's thick and dense — fresh out of the refrigerator, you'll need to exert a little effort to spread it.

Another standard, veggie cream cheese, is disappointing. It's filled with finely minced bits of fresh vegetables but could use some onion to punch up the flavor. The maple pecan cream cheese, is a different story: it has a good maple flavor (derived from pancake syrup, not actual maple syrup, unfortunately), tiny bits of nuts, and a light, whipped consistency. It's dessert masquerading as breakfast.

My trips to Balsam Bagels largely focused on to-go bagels and cream cheese, but you can eat there and choose from other options made in-house, which include vegan and gluten-free choices. On my last visit, the menu offered three kinds of soups, four kinds of salads, more than 10 kinds of sandwiches (including a daily-special panino with bread baked in-house), five kinds of stuffed phyllo pockets, two kinds of quiche — the list goes on. Sweets aren't overlooked either: Depending on the day, you can choose from traditional Jewish treats like rugelach or hamantaschen, and numerous varieties of quick breads, scones, cookies, and other pastries.

Balsam Bagels is run by husband-and-wife team Roni and Rebecca Malek, and their shop celebrated its 10-year anniversary in June. After eating at Balsam and asking the Maleks a few questions, it's clear to me that they adore the crafts of baking, cooking, and service.

"I am extremely passionate about making and baking the best bagels around. I was put on earth to be a bagel baker," Roni says.

That kind of dedication is as rare in the restaurant business as a good, chewy bagel.

Find Laura Rebecca Kenyon on Twitter at @LauraKenyon and dig through her own recipes at LauraRebeccasKitchen.com.