Avvino has been slightly overshadowed by the other restaurant openings of the last year or so. In my opinion, this is due to the higher profile locations, flashier concepts, and splashy interiors of the other new entrants and not on the quality of the restaurant itself. Purely based on the level of food and service I experienced, Avvino showed itself to be a strong contender in the high-end restaurant landscape of Rochester.

After speaking with Janine Wasley, the owner of Avvino, I was informed that the menu had changed with the arrival of a new chef less than a month prior. As Chef Tim Caschette (formerly of Good Luck) makes himself at home, the menu is in a state of transition featuring favorites from the old regime as well as new additions. The offerings fit in well with the current trend of culturally diverse upscale cuisine while having a distinct Italian bent. As the menu develops, I hope more information about local sourcing is brought to the forefront. 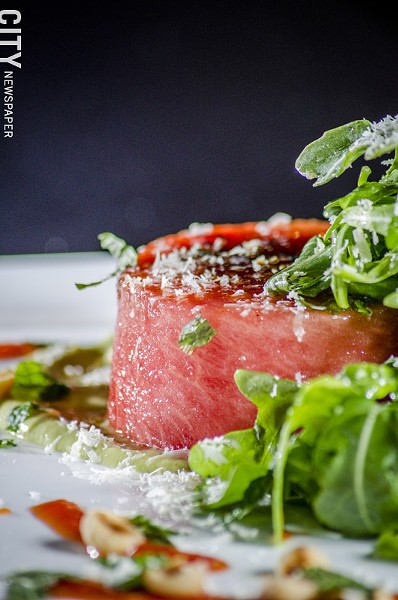 With the restaurant's name inspired by the practice of priming wine glasses prior to service, you would assume its wine list would be well thought out and Avvino doesn't disappoint. A solid selection of domestic and international wines are offered by the glass and there is a giant variety available by the bottle. My dining companions sampled the Sancerre from Laurent Gerard in France ($9 per glass) and the Argentinian Malbec ($8 per glass). The Sancerre was the better received of the two with solid citrus acidity and minerality. On the cocktail side of things, the Pimm's Cup ($9) was a refreshing combination of Pimm's No. 1, lemonade, mint, and cucumber making it an easy drink to enjoy on a hot day.

As we kicked off our meal, fresh baked mini loaves of bread came out in a small cast iron pan fresh from the oven. The crusts were coated with butter, sprinkled with salt, and the underside had a pleasant darkness from being baked in the cast iron. The overall taste was of a brioche-like dinner roll with a faint sweetness. This level of care should be an example to any restaurant that decides to have bread service.

On the starters portion of the menu, the merguez ($9) came out in a sliced link over a bed of toothsome chickpeas in a tomato-based sauce. The coarse ground lamb sausage was seared and spiced well with plenty of paprika and cumin, and ended up juicy — a strong example of the style. Thankfully, the trademark lamb flavor was showcased rather than smothered by the seasoning. 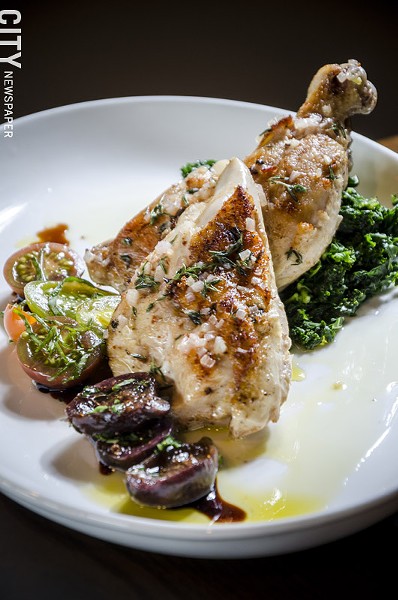 Avvino's take on the watermelon salad ($11) consisted of two thick discs of watermelon that were salted, peppered and lightly bruleed on top. Tender, pleasantly bitter arugula and halved hazelnuts composed the main part of the salad along with an emulsion of avocado and cucumber that was thick and smooth with a vinegar kick. When eaten in combination, the burst of sweetness, salt, vinegar, nuttiness and richness was pleasant, but would have excelled with a dash of finishing salt or more of the grated feta.

Steamed clams ($11) were served in an aromatic white wine broth highlighted by orange zest and fennel, which complemented the briny and tender bivalves. Smooth chicken liver mousse ($8) topped house-made focaccia along with pickled red onions to add sharpness and crunch. The focaccia was a touch thick and dry, but the thoughtful preparation of the liver including an overnight milk soak and seasoning with sherry vinegar and spices made the dish sing.

Diving into the fresh pasta section of the menu, we ended up ordering the squid ink infused fettuccine ($17) which was expertly cooked and finished in a light tomato sauce. The pasta had a mild oceanic flavor and aroma which paired nicely with the sweetness from the corn and rock shrimp. The shrimp were a touch overcooked and the overall dish could have used a bit more salt to make the flavors truly pop.

Stepping into the entrees, the half roasted chicken (as written on the menu) ($24) was cooked sous-vide style and pan finished to produce a fantastic crisp skin. The breast portion was tender and a touch dry with the leg and thigh ending up spectacularly moist. The black truffle and livery foie brought a distinct smell and background flavor that came through nicely even though they were sparsely visible. Greens (kale mostly) were braised well and bordering on over-salted while roasted figs and halved cherry tomatoes balanced things out. Another instance where all the elements fit together properly with salty, sweet, and earthy notes working in concert. 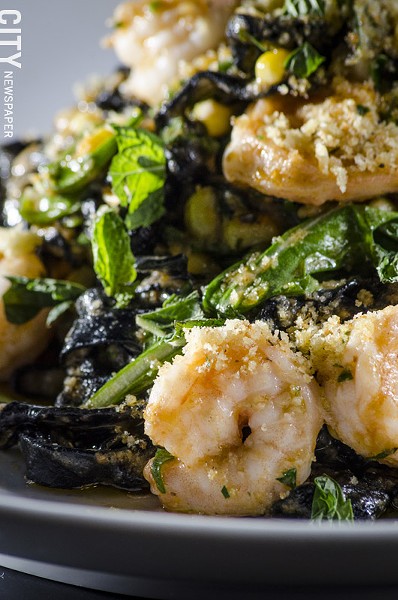 Flat iron steak ($32) was cooked as ordered to medium rare and was rested on a hash of purple potatoes, corn and bacon. The steak was mild in beef flavor with a clean finish. A topping of salsa verde brought a nice pop of acidity and herbal freshness. A simple dish and a tasty crowd pleaser.

Our choice of fish was the wahoo ($30), a firm white fleshed Hawaiian fish nicely crusted with salt, dried herbs and spices. To my taste, the fish was over cooked leaving it a bit dry. The taste of the sea was present throughout the dish especially in the sharp seaweed purée and the squid ink tomato sauce. The house kimchi was potently salty and acidic with solid spice and a fish-sauce-like backdrop.

On the sweeter side of things, the round chocolate hazelnut cake ($8) was dense and lightly fudgy with the taste of hazelnut present but not overpowering. The accompanying vanilla bean gelato was light, clean, and topped with toasted hazelnuts and a dynamic, fruity chocolate sauce. Another dessert option was the lemon sorbet ($5) which screamed of lemon zest and was a touch oversweet.

The ambiance is pleasantly upscale in a traditional kind of way and very comfortable. Dark color upholstery and low lighting are the name of the game here. The service we experienced on both visits was top notch from start to finish. Attentive without being overbearing, Avvino's wait staff provided the kind of service I expect to see at every high-end restaurant.